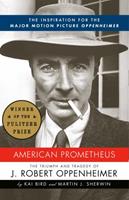 American Prometheus: The Triumph and Tragedy of J. Robert Oppenheimer

J. Robert Oppenheimer is one of the iconic figures of the twentieth century, a brilliant physicist who led the effort to build the atomic bomb for his country in a time of war, and who later found himself confronting the moral consequences of scientific progress. In this magisterial, acclaimed biography twenty-five years in the making, Kai Bird and Martin Sherwin capture Oppenheimer's life and times, from his early career to his central role in the...

How the bomb got built here first

Published by Thriftbooks.com User , 13 years ago
My father spent most of his career in nuclear engineering researching the mathematics of nuclear reactors at Brookhaven. My father had visited all the national labs and got to know all the key players in nuclear physics in the period from 1950-1970. Growing up in that environment I naturally knew a bit about Oppenheimer and Teller and others. It was clear to me that my father had sympathy for Oppenheimer and a great deal of respect. teller was viewed more as a politician looking for fame and publicity. This became even more apparent tto me when in the 1980s I saw how he lobbied the Reagan administration for research on laser based strategic defense satellites. This book is an account of Oppenheimer's life from childhood through the Manhattan Project with emphasis on the most crucial part of his career as the head of the Los Alamos Laboratory where physicists mathematicians and chemists teamed up to develop the first nuclear weapons that were used against Japan. Oppenheimer was a reserved man who did not seek the limelight. He was brilliant but his biggest asset was his management and leadership capabilities along with very good judgement, something that Teller seemed to lack. It was just the qualities of leadership that led to the succcessful development of the atomic bomb in a few short years at Los Alamos. His liberal past and pre-war affiliation with communism caused him great difficulties and some in the military feared that he was a security risk. He was continually being checked out bt J. Edgar Hoover and the FBI. Hoover did not like the appointment of Oppenheimer to the key leadership position at Los Alamos. After the war was over, strangely the man who was able to keep secrets during the crucial period of the Manhattan Projected was not trusted after the war. He lost security clearance and struggled due to the increased fear of communism from the post-war Sovuet Union including the wave of witchhunting during the Joseph McCarthy era. He was liberal and his pre-war past communist associations hurt him deeply. His philosophy on nuclear weapons and his clashes with his former colleague Joseph Teller made far a tormented post-war career. I believe Oppenheomer felt guilt over his involvement in the development of the bomb and was definitely against the arms race. This period of his life as well as his childhood was important to understand the complexities of this man. The authors do a good job of covering this and do not fall into the trap of just emphasizing the war years. This book is engaging and very successful at portraying the life character and personality of J. Robert Oppenheimer. He was the right man for a difficult and challenging job and had what it took to get the most out of an odd group of geniuses.

The Price of Genius

Published by Thriftbooks.com User , 16 years ago
In their book, American Prometheus: The Triumph and Tragedy of J. Robert Oppenheimer, Kai Bird and Martin J. Sherwin have created a biographical masterpiece that will not soon be outdone. The authors research and writing has given the reader a candid, yet complicated and conflicted portrait of one of America's leading scientific minds of the twentieth century. Their research is comprehensive and their writing intelligible as can be seen as Bird and Sherwin recreate Oppenheimer's grand yet tragic life from his lecture at the New York Mineralogical Club at age twelve, to the 1954 security hearings in Washington that altered his later life. The question of Oppenheimer's affiliation with and membership in the American Communist Party is factually covered in detail along with his battles against the American political system and government powerbrokers. Bird and Sherwin remind the reader that while Oppenheimer may not have won the Noble Prize in physics, he should certainly be given the credit for opening the door for other physicist, such as Ernest Orlando Lawrence, to win the coveted Nobel Prize. While Oppenheimer had a dark side to his personality, the authors show us that Oppenheimer was not only a genius in theoretical physics, but was remarkably well versed in many fields including poetry, art, music, books. . . . He also loved camping in the wilds of New Mexico, and horseback riding near his beloved Pierro Caliente Ranch. Oppenheimer's love affairs with country, wife, children, friends, science and women are also well documented. "American Prometheus: The Triumph and Tragedy of J. Robert Oppenheimer" was a great read. It also puts to rest many unanswered and troubling questions concerning the life and times of J. Robert Oppenheimer. This masterpiece of literary work will not be outdone any time soon.

A compelling portrait of a complex man

Published by Thriftbooks.com User , 16 years ago
Oppenheimer was a man of his time for a time and quickly became a man out of time when he warned with foresight at the dangers of nuclear proliferation. This compelling, well researched biography by Kai Bird and Martin Sherwin provides the most complete picture of one of the most enigmatic, charistmatic and iconic figures of the 20th Century. Pulling from a variety of sources, the authors create one of the most complete and compelling portraits of the "father of the atomic bomb". Following Oppenheimer and his family from his birth, through his work at UC Berkeley, involvement in protesting social injustice and ultimately his leadership of the team that develop the atomic bomb AMERICAN PROMETHUS looks at Oppenheimer flaws and all. Oppenheimer emerged at one of the most morally complex and scientifically rich times in history. His work at Los Alamos with his group of collaborators transformed our world for good and bad. Oppenheimer lived both in the glow of that success and in the shadow of the world he helped usher in for the remainder of his life. The authors present all this information with detailed accounts from Oppenheimer's life. They also relate many of the personal conflicts that Oppenheimer felt while working in one of the most promising and dangerous fields. There's plenty of excerpts from Oppenheimer's letters and comments from contemporaries he both agreed/disagreed with (Teller, Bohr, Strauss and many, many others). When Oppenheimer had his security clearence revoked and he was betrayed by rumour, poor choices and some of his collegues, one of America's brightest and best fell from hero to possible traitor in the eyes of the American public. The controversey and circumstances were much more complex than they appeared on the surface. This book provides much needed balance to a complex life rendered simply by the idealogy that drove (and still does to some extent)America at the time. It was a complex, harsh world full of shadows and, unfortunately, Oppenheimer's reputation through both his beliefs and the beliefs of others around him was dragged gagged and bound into the shadows. Although he often disagreed with the US, he had his own unique sense of patriotism every bit as valid as those that accused him of being an unacceptable risk. When the disagreement about whether or not the Super was going on the authors quote a wonderful discussion. In discussing the moral implications of building a bomb even more destructive than those dropped on Hiroshima, Oliver Buckley (president of Bell Telephone Labs)commented that there was "no moral difference between building an atomic bomb and a super". James Conant dryly replied, "there are grades of morality". In a moral black and white world Opponheimer found his claim to fame and also lost himself.

A Great Piece of American History

Published by Thriftbooks.com User , 16 years ago
Kai Bird and Martin J. Sherwin have produced a masterpiece in "American Prometheus." This is the truest, deepest portrait of J. Robert Oppenheimer we have ever known. This is the genius-physicist with a human face. I encourage everyone to read this book, especially those who were dissatisfied with previous attempts to define the man. Prometheus gives a good balance to all the issues, childhood, education, Berkeley, Cal Tech, Communist affiliations, the bomb, and his later life tragedies. Agreed, the authors had access to more material than previous writers, but American Prometheus employs eminently readable prose with the skill to explain highly technical concepts in understandable layman's terms. As a layman, I appreciate that. This biography was 25 years in the making, with Sherwin's research beginning in 1979. Many of Oppenheimer's contemporaries were still alive and extensive interviews help flesh out this engaging look at a true genius. This thoroughly documented and annotated work is a joy to read. Special note: The authors credit material used from Jon Else's documentary "The Day After Trinity." If you want to hear Serber, Bethe, Rabi, Frank Oppenheimer and others in the flesh, check out the DVD version of this film, a good companion to American Prometheus.

A Sharp, Lucid Look at Oppenheimer

Published by Thriftbooks.com User , 16 years ago
Kai Bird's and Martin J. Sherwin's biography of J. Robert Oppenheimer is a deeply researched, carefully judged and well-written examination of the life and politics of the man who directed the development of the atom bomb. The story is a complex one of murky motivations and large consequences, and to the credit of the authors, who offer their own point of view on central questions, they do not evade the complexity of the questions or the possibility that others would answer them differently. They have done the hard and thorough work on which first-rate biography depends: they have located and reviewed the primary source documents, mastered the secondary literature, and interviewed scores of those with personal knowledge and information to offer. The story they tell is of a man with huge intellectual-and as it turned out, organizational-gifts, and faults of a comparable magnitude. The book is first-rate.

American Prometheus: The Triumph and Tragedy of J. Robert Oppenheimer Mentions in Our Blog