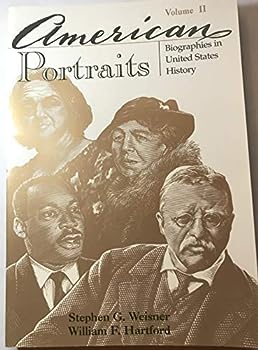 This two-volume biographical reader captures the lives of both famous and lesser-known Americans. It looks at people who affected and were affected by their times. The volumes are balanced... This description may be from another edition of this product.

Published by Thriftbooks.com User , 16 years ago
This volume [and I assume the first volume too, though I haven't read that] strives mightily to give a diverse sampling of prominent Americans in history. As the editors point out, traditional biographies have focused on white, male, Anglo-Saxon examples. But in counterweight is offered this book. Hopefully, the reader will gain an appreciation of the complexity of American society. The choices in this volume may include people unfamiliar to you. [Which is a salient strength of the book.] Like Sarah Evans, an educator and elected official [sic] in the 1890s, when women had no vote. Or Susan Picotte, the first Native American female doctor. Good examples of unorthodox trailblazers.
Trustpilot
Copyright © 2022 Thriftbooks.com Terms of Use | Privacy Policy | Do Not Sell My Personal Information | Accessibility Statement
ThriftBooks® and the ThriftBooks® logo are registered trademarks of Thrift Books Global, LLC