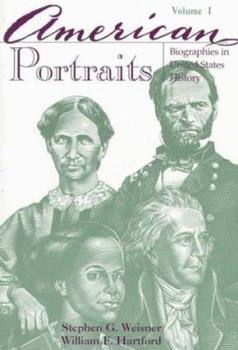 This two-volume biographical reader captures the lives of both famous and lesser-known Americans. It looks at people who affected and were affected by their times. The volumes are balanced chronologically and geographically, and in terms of gender and race.

Short biographies of some of the more common people

Published by Thriftbooks.com User , 16 years ago
To understand the history of America, it is necessary to know about some of those who were the movers and shakers. However, to achieve a complete understanding of the forces that made the United States what it is today, it is also essential that you know about the lives of some of the lesser greats and of the more common people. A few of the essays in this book are about the greats, only three of the nineteen essays in this book are about historical figures at the highest level. Those essays are about Christopher Columbus, Thomas Jefferson and John Marshall. Lesser, but still significant historical figures covered are Daniel Boone, William Penn, Tecumseh, Sam Houston, Harriet Beecher Stowe, John Brown, Nat Turner and William T. Sherman. Nearly unknown people also included whose lives illustrate how the country was built are Anne Hutchison, William Byrd II, Phillis Wheatley, Frances Wright, Mary Richardson Walker, Elizabeth Blackwell, Emily Lyles Harris and James T. Rapier. All of the biographical profiles were written by historians with a knack for effective exposition. They describe why knowledge of all these people is important. My favorite essay was the one about William T. Sherman, a man who truly understood the phrase "total war." He was one of the very few people who understood that the way to completely defeat a modern nation state in a war was to utterly devastate the country. While his methods were considered brutal, his goal was to destroy infrastructure rather than kill people. His tactics went a long way towards destroying Confederate morale, by scorching the Earth he let all Confederate citizens know what their fate would be if the war continued. I really enjoyed this set of essays, while most of the information about the major historical figures was not new to me, it was written so well that I enjoyed reading it. The background on the lesser figures illustrated the struggles these people had as they went about their lives.
Trustpilot
Copyright © 2022 Thriftbooks.com Terms of Use | Privacy Policy | Do Not Sell My Personal Information | Accessibility Statement
ThriftBooks® and the ThriftBooks® logo are registered trademarks of Thrift Books Global, LLC