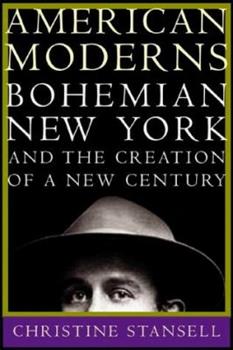 American Moderns: Bohemian New York and the Creation of a New Century

A brilliant account of the American bohemians whose experiments in living, writing, and loving created the modern world and made New York its capital. In the early years of the twentieth century, an exuberant band of talented individualists living in a shabby neighborhood called Greenwich Village set out to change the world. Committed to free speech, free love, and politically engaged art, they swept away sexual prudery, stodgy bourgeois art, and...

Published by Thriftbooks.com User , 21 years ago
Although the 1910s are often thought of as the tail end of the Progressive Era, Stansell makes a strong case that that decade actually saw the genesis of a social progressivism that slammed the door on the Victorian era in America. She also argues - a bit less convincingly - that the 1910s marked the beginning of New York's Greenwich Village as we now know it. But whether you accept the latter thesis or not, there is no doubt that the legendary neighborhood played host to some of the most important social activism of the early twentieth century. Stansell provides an impressive overview of the events and the lives of the people behind them.Given the sheer magnitude of her subject, Stansell is necessarily sketchy in places, and the book suffers on occasion from an overly wordy, academic style. But she does provide a succinct look at the era's most important activists: especially Emma Goldman and also Randolph Bourne, John Reed, Margaret Sanger, Mabel Dodge and many others. The book doesn't pretend to be a biography of any of them but does whet the reader's appetite for learning more about them all. The same is true of the events it describes, particularly the successes and failures of the labor movement and the evolution of the feminist movement beyond advocacy of women's suffrage. (A particularly fascinating part of Stansell's story is the tension between labor and feminism, a division that stymied the left back then much as it does now.) Stansell ends her narrative with a brief assessment of the Red Scare and the quick end it put to the radicalism she delineates earlier in the book. She doesn't really examine the social progress of the otherwise-conservative 1920s and beyond or demonstrate how the radicalism of the 1910s laid the groundwork for it; but the case for that is quite clear after reading this.The book contains little contextual information regarding the societal conditions of the preceding decades and almost none for the following ones, so Stansell's argument is easier to appreciate if you already have some knowledge of those times. Still, it is a good overview of an underappreciated bridge between two well-documented eras, the people who got us across that bridge, and the environment they lived in. If you want to learn about America in the 1910s, this book may or may not tell you all you want to know. But if not, it will definitely lay the groundwork for understanding whatever event or person you're most interested in.

Published by Thriftbooks.com User , 21 years ago
Princeton University historian Christine Stansell's City of Women: Sex and Class in New York, 1789-1860 was splendid, and this book, which examines the creation of a "bohemian" sub-culture in New York City in the 1890s, also is superb. (The image of "bohemia" as the antithesis to middle-class values owes much to Puccini's opera "La Bohème," which was first produced in 1896.) According to Stansell, bohemian New York "was one manifestation of gathering revulsion against a society that seemed locked in a stranglehold of bourgeois resolve." That is an intriguing thesis, and Stansell provides wonderfully-evocative profiles of many of the New York pioneers of American modernism. Anyone interested in the origins and development of 20th-century American culture should read this extraordinary book. Stansell succinctly defines bohemia as the "revolt against bourgeois convention," and she writes that New York's bohemia was widely believed to be peopled with "youthful libertines who despised bourgeois respectability and material success." One respect in which bohemia rejected middle-class certainties was to permit innovation in gender relations, and the appearance of the "New Women" in New York beginning in the 1890 is among the most important events Stansell describes. What Stansell characterizes as the "dissent from bourgeois life" took many forms, and it is difficult to generalize without oversimplifying, but her chapter on political radical Emma Goldman begins with the important point that modernism tended to merge "disparate phenomena." According to Stansell, Goldman "championed modern dance and modern drama, free love, homosexuality, and martyrs of the labor movement," and she was a forceful advocate of "militant anticapitalism." I would recommend this book solely for Stansell's multi-part sketch of Goldman.Stansell's discussion of changes in the publishing industry also is excellent. According to Stansell established publishes were increasingly criticized as "aging, smug, priggish, stodgy," attributes which probably could have been assigned to middle-class leaders of all facets of turn-of-the-century American society. In contrast, Stansell writes, independent publishers, "mostly well-off German Jews," marketed literature with a political nature, as well as "birth control information, pornography, and papers advocating free love." Stansell incisively observes that the frequent battles of this era concerning censorship laws were part of a broader "contest for cultural authority..., a battle over who was to determine the content of literature," and censorship opponents "were delighted to find themselves free-speech heroes."Stansell's discussion of the political and cultural content of the revolt against middle-class America demonstrates the complex interplay of ideas, as does the section of her book entitled "The Human Sex." According to Stansell, the moderns rejected the "crippling convention of their parents' generation [that] had s

Published by Thriftbooks.com User , 22 years ago
I was amazed by the erudition of this book. So much knowledge and so many chunky footnotes, yet the author never weighs you down with all she knows (and she really knows her stuff). You get an new and amazing understanding of not just New York but America in the early 20th c.

Published by Thriftbooks.com User , 22 years ago
Did you ever wonder how this one tiny area of The City evolved into a sanctuary for artists, writers, the excluded and those otherwise constrained by the conventional? Wonder no more. Thanks to Christine Stansell, professor of history at Princeton University, we have the informatively compelling American Moderns, the first comprehensive portrait of that transformational, turn-of-the-century avant garde dedicated to free thought, free speech, free love, even free sex in the face of a persistently Victorian ethic. This seminal work represents an exhaustive exploration of a cultural phenomenon which irreversibly altered not only a band of bohemians, but the psyche of modern America itself. Sure, this country has somehow moved from the 19th Century's wicked repression and exploitation of children, women, minorities and the waves of immigrants who made their way to these shores. But how? In an alternately erudite and entertaining style, Ms. Stansell makes her case, as she breathes life into archival materials which include the papers and memoirs of Emma Goldman, Mabel Dodge, Georgia O'Keefe, painter John Sloan, Margaret Sanger and many other pioneers of the era.

Published by Thriftbooks.com User , 22 years ago
Christine Stansell amazingly captures the not fully yet dug up Bohemian life in New York. Especially the parts about Greenwich Village were great, but the entire book is fabulous. Every part grabs you into it, and makes you feel like you were in Bohemian New York. A real page turner. I reccomend this book highly to anyone who has the slightest interest in it, or has great interest in buying, because I'm sure they will love it too, unless you are upset that Edgar Allen Poe isn't in it.
Trustpilot
Copyright © 2022 Thriftbooks.com Terms of Use | Privacy Policy | Do Not Sell My Personal Information | Cookie Preferences | Accessibility Statement
ThriftBooks® and the ThriftBooks® logo are registered trademarks of Thrift Books Global, LLC