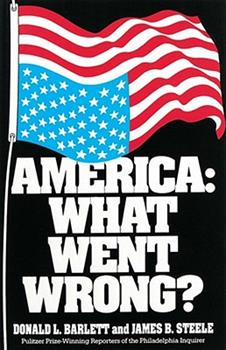 Updated for 2020 The downward spiral of America's middle class is no accident: This book explains in vivid detail how Washington and Wall Street have made decisions that enrich the wealthy at the... This description may be from another edition of this product.

Published by Thriftbooks.com User , 18 years ago
This book was bought as one of the text books I needed for my college civics class. Of all the text books I have bought, this is the only one that I read from cover to cover. This book will make you angry with what is allowed to happen to the average American. Most of the incidents that are talked about are not general public knowledge. I don't feel that it is a fatalistic book as other reviewers have indicated. It does bring out some disturbing issues that should not have happened or allowed to happen.

Published by Thriftbooks.com User , 19 years ago
Tis a usually natural reaction to want to lash out at the bearer of bad news, this book defines the limitations and restrictions that various pressure groups have inflicted on that dysfunctional corporation known as the United States. "America: What Went Wrong" is just as important and relevant today as it was when initally released. America's overall economic situation is much worse today than it was when this book was initially published. This book accurately forecasts the problems America has as it loses its manufacturing base and became a service-oriented society (Wal-Mart supposedly has 700 Chinese factories of its own). Now the multi-national's factories are fleeing Mexico in 2002 for the slave-like workers of China.Unsettling for sure, I challenge you to read this book and don't be surprised if you re-read parts of it as the late 1990s Clinton/Greenspan artificial economic bubble unwinds into a 1930s style worldwide economic depression.

Published by Thriftbooks.com User , 22 years ago
This is a book that really helps ordinary Americans understand what is happening to the economy. Though somewhat dated by being written before our so-called period of prosperity, the trends emphasized in the book not only continue, but in some instances have accelerated. In that important sense, B's & S's work remains as topical today as it was yesterday. It's also an excellent companion to Kevin Phillip's more recent *Politics of the Rich and Poor*, though the former aims at a more popular audience. Many of the statistical comparisons of Phillip's book were originated here: the junk bond plunder of healthy companies, the massive export of high-wage jobs, the decline of pension funds and health care, et.al. And a sorry, sorry tale it is. Several pressing topics not included in Phillip's book are discussed here. "Net operating loss" is perhaps the most egregious method of transferring wealth upward. This highly biased tax allowance allows struggling companies to write off last year's net operating loss on this year's tax bill, forcing taxpayers to pay for operating losses incurred by private sector firms. Similarly, Chapter 11 bankruptcies allow indigent firms to continue operating with present management but immune from creditors. The net effect of both measures is to lessen risk and encourage reckless speculation, thereby undermining long-term market health. Included in the book are other degenerate measures deriving largely from the 1980's: Deduction of interest from corporate borrowing, Tax-free government bonds (deriving from early 1900's), Untaxed stock transactions, et.al. The overall result is to transfer the tax burden from wealthy categories to middle-cass brackets. For more far-sighted conservatives, this amounts to an alarming social and political development.Though much the same ground has now been trod in other books, the story can stand multiple retellings, since middle-class decline is perhaps the most important domestic trend of our time. What distinguishes this book's original telling are the vivid personal profiles amidst the welter of relevant statistics. These cameos have the crucial effect of reminding the reader that behind the abstractions are real people whose lives are shaped by tax legislation, wealth transfers, and job export. The result is a little like Studs Turkel meets the tax collector.Recommended for those interested in the social contours of the future.

Published by Thriftbooks.com User , 23 years ago
This book is really an eye opener. It cuts through all the bull that we normally get in the press or from politicians. It suddenly puts everything in focus and you realize why things are the way they are now, especially if you were around in the 50's as a pre-baby boomer or a baby-boomer. I think it's even more important that people born in the 70's read it so they can get a grasp on where this country is headed. Intelligent, clear, well documented writing, it should be included in every school curriculum as required reading.

FOR YOUR OWN SAKE, READ THE BOOK!

Published by Thriftbooks.com User , 23 years ago
I am amazed that the other reviewer would tout the Reagan years as being fiscally "hunkydory." Reagan was the one who gave us years of defense budgets which certainly benefited defense contractors (Lockheed, Martin-Marietta, McDonald Douglass, General Electric) but nearly destroyed the country by running up the national debt to astronomical levels. It is now being learned that this debt was not designed to "protect" us from the Soviet Union, which was even then on its knees, but a deliberate attempt to destroy all New Deal social programs (Medicare, Social Security, etc.). And if the above were not enough, Reagan deregulated the savings and loan industry which led to a feeding frenzy by unscrupulous people thus costing the American taxpayer $1 trillion to clean up. The 80's were truly the era of GREED and should not be held up as a model of fiscal responsibility, let alone a model for emulation.Reagan was indeed good for a few; his friends at the top 1% did get richer - immorally richer. The rest of us learned how to tread water really good. Barlett and Steele have done a great service by writing their books and giving the American people a chance to see what has really been done TO US.
Trustpilot
Copyright © 2022 Thriftbooks.com Terms of Use | Privacy Policy | Do Not Sell or Share My Personal Information | Accessibility Statement
ThriftBooks® and the ThriftBooks® logo are registered trademarks of Thrift Books Global, LLC