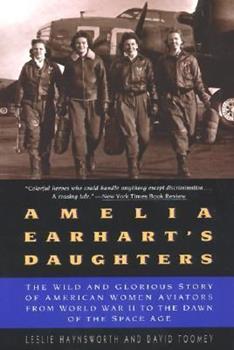 Amelia Earhart's Daughters: The Wild and Glorious Story of American Women Aviators from World War II to the Dawn of the Space Age

In 1942, with war raging on two fronts and military pilots in short supply, the U.S. Army Air Force enlisted a handful of skilled female aviators to deliver military planes from factories to air bases--expanding the successful program to include more than one thousand women. These superb pilots flew every aircraft in the U.S. Army Air Force--including B-26s when men were afraid to--logging more than siz million miles in all kinds of weather. yet when...

From WASPS To MERCURY

Published by Thriftbooks.com User , 22 years ago
Hainsworth and Toomey have done an excellent job in creating an overview of women as pilots and the special challenges they met in WWII through the Mercury Astronaut testing program. Their research is sound, the writing is easy to digest. They do credit to two groups of women who have been often kept from the history books.

Published by Thriftbooks.com User , 24 years ago
I picked up this book on a friend's recommendation and with few expectations. I had had no interest in aviation, am a tremulous airplane passenger, and when my fourth grade class assembled to watch the histoic moon landing, I had more interest in one small boy next to me than I did in one small step for man. Not anymore. Haynsworth's and Toomey's gripping narrative style and rigorous scholarship provide what few history books do, page-turning excitement. This book conveys the miraculous wonder that spectators must have experienced at early barn-storming events: breathless amazement at mankind flying high and fast beyond the clouds and straight into the impossible. From contraptions of wood and wire, barely recognizable as planes, to 6.2 million pound machines hurtling through the air at speeds of 6,000 miles an hour, Amelia Earhart's Daughters presents the great scope of the history of women in aviation. Walk, run, hell, fly to your nearest bookstore and pick up this book, you'll be glad you did and grateful to these pioneer women aviators and the authors for letting you share the ride.

Makes Me Feel A Mile-High

Published by Thriftbooks.com User , 24 years ago
The stories of women innovators always excite, but the story told by Haynsworth and Toomey is inspirational. More than a feel-good book, however, this book ranks as the best historical text I've read since "The Rape of Europa." Amelia Earhart's Daughters should make its way into all high-school reading lists. The stories of these unknown angels are vital components of the story of women in the 20th Century.

Published by Thriftbooks.com User , 24 years ago
The advantage of reading nonfiction written by two literature specialists is that this book is not only informative and obviously well-researched, it is also compelling and thoroughly enjoyable to read. The challenges faced by the (socio-economically) diverse group of women involved in both the WASP and aerospace programs, as well as their motivations and the women themselves, literally fly off the page. Anyone who still believes that historical accounts can ever be objective is either naive or uneducated, and the bias here is in favor of the women, but not undeservedly or unreasonably so. They persevered and contributed greatly to our society when many, male or female, would have given up, and this account of their struggle is very even-handed. As a high school teacher, I will recommend this book to my students of both sexes as an absorbing lesson in history, government, and the role of determination and sacrifice in achievement. Well done!

This an important contribution to women's history.

Published by Thriftbooks.com User , 24 years ago
The book is divided into two parts, both of which detail individually and collectively the experiences of women pioneers in aviation and space flight. The first describes the Women Airforce Service Pilots of WWII. These women flew every aircraft in the U.S. Army Air Force inventory six million miles in all weather. Thirty-eight died in service to their country. The book's second part is a detailed account of Jenie Cobb and the twelve other women tested at the Lovelace Clinic in 1960-61--the same tests administered to the Mercury astronauts. The book reads like good fiction, yet is all the more amazing because it's fact. These women's unrelenting courage in the face of all sort of adversities, not the least of which was prejudice, was nothing less than amazing. I picked the book up on the way home from work last Friday, and stayed up all night reading it.
Trustpilot
Copyright © 2022 Thriftbooks.com Terms of Use | Privacy Policy | Do Not Sell or Share My Personal Information | Accessibility Statement
ThriftBooks® and the ThriftBooks® logo are registered trademarks of Thrift Books Global, LLC