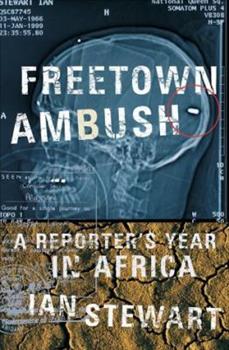 Ian Stewart has reported from some of the most dangerous places on earth, but none more dangerous than Sierra Leone. When he was named West Africa bureau chief by the Associated Press, Stewart... This description may be from another edition of this product.

Published by Thriftbooks.com User , 19 years ago
Ian Stewart?s account of conflict journalism during his time with the UPI and AP is disturbingly honest. Though Stewart confesses to being an adrenaline junkie, his narrative clearly reveals a truly compassionate professional driven to cover conflict in order to reveal atrocities that threaten human rights and more crucially human lives. Unfortunately, Ambushed is also an account of how time and time again the deaths of children, families, and communities in places like Sierra Leon are underexposed. Stewart writes about the frustration of writing countless stories about war torn regions that are never published, because the public is simply not interested. From his description is seems that this injustice lies not in the field of news coverage, but rather on the desks of news editors who choose not to print stories about Africa, the continent relegated to the back pages at best by media corporations. So civil wars, that translate into thousands upon thousands of civilian deaths go unheeded. Stewart?s descriptions of the conflicts that he witnessed, predominantly based on stories that he?d written for the wire, turn a careful and compassionate eye to the victims (both survivors and casualties). His attention to detail far exceeds event coverage (i.e. date, time, and body count) by attending to humane details and the individual consequences of tragedy for victims of war, whose stories he cared enough to tell. Stewart?s own life was dramatically transformed, January 1999, when rebel soldiers in Freetown ambushed his car. His account of recovery, physically and psychologically are incredibly candid, and truly extend the sense of tragedy and courage to the reader. Ian Stewart has a great deal to be proud of in his career as a foreign correspondent, and undoubtedly has many more great talents and works to share with the world. I recommend this book without reservation to anyone with a heart.

Ambushed: A War Reporter's Life on the Line

Published by Thriftbooks.com User , 19 years ago
The first impression I had of Ian Stewart, when I met him in VietNam, was that of the prototypical "foreign correspondent" - right out of central casting. Since then he has gained maturity the hard way - but he has gained it. His analysis of the problems and pitfalls of West Africa are right on target - some of which I have learned first hand in my own travels. If you want a taste of West African adventure without risking your life, read this book!

Published by Thriftbooks.com User , 19 years ago
This book is a fierce page-turner that rumbles through until the very last page. Ian Stewart gives an honest and sobering account of what it's like to cover war in a region that has forever played second fiddle to the headline news. From where Stewart was filing, all the glory associated with war reportage had dried up and gone. All that remained was barbarism and terror. The book makes a powerful statement about the great myth of war and how it sits with a man --soldier or reporter --once he's on the other side of it. We're lucky that Stewart made it out alive. This book is a must read for any young journalist, or anyone for that matter who enjoys a powerful story.

Published by Thriftbooks.com User , 20 years ago
Through a year as a journalist on the front lines of various African wars, Ian Stewart allows us into the person behind the byline -- the struggle to remain a detached observer while still remaining human, and then through the struggle for life and recovery itself after he is shot in the head while on assignment in Sierra Leone. While Stewart is the continuity from chapter to chapter, the stories that brought him to Africa in the first place are always front and centre. The background to each war zone is woven in, to ensure that while we are reading about his observations and struggles, we also are reading the stories that were (often) ignored by our daily papers in the first place. Stewart's writing style manages to turn what are sometimes very heavy, heart-wrenching and tragic events, into a fascinating read, one that is hard to put down. I definitely recommend this book.

Published by Thriftbooks.com User , 20 years ago
This book gave me new insight into what makes journalists tick and a new understanding of African politics. I must admit to paying little attention before.A thoroughly good read filled with moments of horror, excitement and humor.The author offers us a glimpse of what it is like to suffer a brain injury and the road to recovery.If you like adventure and human interest written in a crisp style this book is for you.Looking forward to the next one.
Trustpilot
Copyright © 2022 Thriftbooks.com Terms of Use | Privacy Policy | Do Not Sell or Share My Personal Information | Accessibility Statement
ThriftBooks® and the ThriftBooks® logo are registered trademarks of Thrift Books Global, LLC