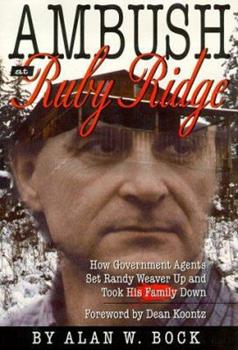 Ambush at Ruby Ridge : How Government Agents Set Randy Weaver Up and Took His Family Down

Bock chronicles the U.S. government's elaborate 18-month surveillance of Randy Weaver, an Idaho backwoods resident indicted on a fireamrs charge many claim was a government act of hatred and... This description may be from another edition of this product.

Published by Recommend , 9 months ago
I couldn’t put the book down the Weaver family went through an extremely tragic situation that wasn’t right and wasn’t their fault. Sadly you have to read this to believe it and it’s worth it

Published by Thriftbooks.com User , 16 years ago
This book covers the circumstances before, during and after, of the murder of three people at the hands of ATF/FBI agents. They also killed the same families dog and shot two other people. All this on a raid over a warrant on a petty charge that was entrapment from an undercover agent to begin with. That Lon Horiuchi (the immoral scum that murdered Vicky Weaver as she held a baby in her arms) is not sitting on death row or at the least rotting for the rest of his life in prison is a travesty of justice. Sorry but I believe what this guy did had nothing to do with poor judgement or incompetence. I recomend this book to all, but especially to all you moronic flag wavers who are under the delusion that America is free or that the US government, in particuarly those involved with law enforcement, are the good guys.

This could happen to you.

Published by Thriftbooks.com User , 23 years ago
Well written factual account of the standoff at Ruby Ridge which cost Vicki and Sam Weaver ther lives. This book should be required reading by everyone that thinks the government is fair and just. If this dooesn't make your blood boil, maybe you should check your pulse!

Published by Thriftbooks.com User , 23 years ago
Dean Koontz wrote the forward for this book and I found it alone, is worth the price. Koontz's command of the language and his opinions were extremely well-written. Something that should be published on its own. As for Mr. Bock, he told it like it was. There was no elaboration of the information he reported. And there was no attempt to voice his own opinion until the very end. The additional cases he listed were terrifying in chronicling the abuses of the federal government. This should be recommended reading, no, mandatory reading, for everyone who believes their government is above reproach. Hats off to Mr. Koontz and Mr. Bock, I was greatly impressed.

Published by Thriftbooks.com User , 24 years ago
Readers of Alan Bock's frequent essays in the Orange County Register are not surprised that Ambush at Ruby Ridge continues to recieve great reviews. This guy turns out well-reasoned, insightful and factually consistent work on a more-or-less daily basis. And he has done so for years.A lot of folks give lip service to the notion of journalistic integrity; Bock leads by example. Not yet familiar with Alan Bock? Run "Alan Bock" on the search feature and read a few of the essays that come up. Is he not one of the best (and most underated) political writers of our era?

Published by Thriftbooks.com User , 25 years ago
The photographic section in the middle of the book picturing Sammy Weaver's classmates with targets pinned on their shirts shocks one into the reality that "yes, this really did happen. A fourteen year old was murdered, his little arm shot completely off." The family dog's dead carcass has multiple tank marks from being repeatedly run over. Bock is fair in pointing out that the Weaver's had a different point of view, but hey, isn't that why our forefathers came to this country? It requires some concentration to follow all the documentary but what an amazing chronicle of the great injustice done to this family by Big Brother! Bock is very courageous and I wouldn't be surprised if the government bans the book. After all, the first thing Hitler did was to kill the real journalists. Refreshing in a time when journalists are afraid to speak out for fear of government retaliation. Direct coverage of the true events surrounding Ruby Ridge trials, great photographic section!<BR
Trustpilot
Copyright © 2022 Thriftbooks.com Terms of Use | Privacy Policy | Do Not Sell My Personal Information | Cookie Preferences | Accessibility Statement
ThriftBooks® and the ThriftBooks® logo are registered trademarks of Thrift Books Global, LLC