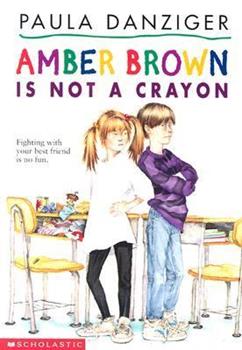 Amber Brown is Not a Crayon

(Book #1 in the Amber Brown Series)

Even when her best friend is moving away, Amber Brown is always bold, bright, and colorful. #Amber Brown is out now on Apple TV+ Amber Brown and Justin Daniels are best friends. They've known each... This description may be from another edition of this product.

Published by Thriftbooks.com User , 3 years ago
I purchased a "good condition" book and received an old library book with red DISCARD stamps all over it. Also did not receive the print version I ordered. Book was full of wrinkles, creases, rips, stains, etc. GROSS!

Published by Thriftbooks.com User , 15 years ago
I liked this book because it is about two best friends named Amber Brown and Justin Daniels. In this book Justin is moving away and he and Amber have a fight. This is a funny book that is full of character! I hope you read to see IF they make up!

Step in to the feisty world of Amber Brown and friends!

Published by Thriftbooks.com User , 15 years ago
Third grader, Amber Brown, and Justin Daniels have been best friends ever since preschool. They always know what the other is thinking, have created a giant ball of chewed gum that is their prized possession, and have the perfect way to eat Oreo cookies - Amber eats the cream filling, and Justin eats the chocolate cookie shell. Having known each other forever has only worked to help them survive school. After all, they're constantly sticking up for one another when someone decides to tease them about their names - "Amber Brown is not a crayon," "Justin Time" - they help each other out with homework - Justin is the math brainiac, while Amber's strong-point is spelling and penmanship - and they sit next to each other for all class activities. Which is why they both have a hard time accepting the fact that Justin is moving. As a dynamic duo, the two can't imagine being separated. And no, it's not being separated by a town, or a single state, but, rather, thousands of miles. Justin will be in Arizona, and Amber will be stuck in New Jersey. Now, as they begin contemplating what life will be like without the other by their side, disaster strikes, and the two bosom buddies begin fighting like cats and dogs - refusing to even speak to one another. The people around them, from their parents to their beloved teacher, Mr. Cohen, have no idea what to do to get the two pals to make up, and everyone begins to wonder whether the two will manage to mend their friendship, before it's too late. I originally read AMBER BROWN IS NOT A CRAYON when I was in the fourth grade, and instantly fell in love with Amber. Paula Danziger has a magical way of meshing the fun (best friends, school projects) with the serious (moving away), to create a splendid work of fiction that really appeals to young readers. Her ability to bring real-life situations to the forefront, and shine a spotlight on them is inspiring, and will obviously win a place in the heart of readers who are experiencing similar situations. Danziger manages to put various lessons into such a compact book, from conflict resolution, to feeling comfortable enough to reveal your true emotions. Amber is a lovable character, whose sloppy, messy ways make her unique, and easy to relate to; while her friendship with Justin really illustrates just how strong the bond can be between children - even those as young as the two characters in this book. Justin, on the other hand, also brings a diversity to the story, and helps to highlight both his, and Amber's quirks. The two characters play off of one another marvelously, and truly bring their own unique voices to the tale. Step in to the feisty world of Amber Brown and friends! Erika Sorocco Freelance Reviewer

Published by Thriftbooks.com User , 15 years ago
I like the story Amber Brown is not a crayon. The best character was Amber Brown. I like Amber Brown because she is funny. The story was good because Amber was nice. I also liked the story because it was funny. I think you should read this story because it shows how to get back together when you breakup and be friends.

Published by Thriftbooks.com User , 17 years ago
This is a fascinating book. It is about a girl named Amber Brown. Her best friend Justin had to move to Alabama. She needs to find another best friend. But nobody is as good as Justin. I enjoyed it because there were lots of suprises in this fascinating book. It is the first book in the collection. Amber Brown is funny and I would like to be like her.
Trustpilot
Copyright © 2022 Thriftbooks.com Terms of Use | Privacy Policy | Do Not Sell or Share My Personal Information | Accessibility Statement
ThriftBooks® and the ThriftBooks® logo are registered trademarks of Thrift Books Global, LLC