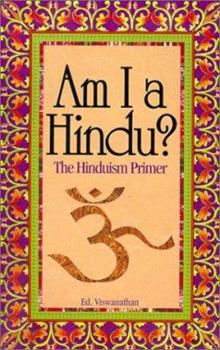 Am I a Hindu?: The Hinduism Primer

This gem of a book encapsulates the esoteric wisdom of one of humanity's oldest religions in an easy-to-understand conversational format. Covering the entire sweep of Hindu belief, answering questions... This description may be from another edition of this product.

An excellent book for Indians born in USA

Published by Thriftbooks.com User , 18 years ago
I saw this book for the very first time, while browsing through a book store in London Heathrow airport. Honestly, what caught my eyes is the name of the book. Unlike all other books I read about Hinduism, this book is very simple. I read the whole book during my flight from London to New York. This book answered all my questions I had about my culture my culture as well as my religion. I also learned so aspects of Christianity also from this book. The book also helped me to answer all type of questions my Christian friends ask me. Now when they ask me, "Why Hindus worship many gods?" I can answer them, "Hindus worship the one and only God - Brahman which express itself in many forms." When they ask me, "Why Hindus worship idols?" I can answer them, "Like every one else, including Christians, Hindus use idols or icons to concentrate on God who has no name or form." I can also tell them that Hindus believe that every person who search after truth will attain salvation [ self-realization] irrespective of whether he or she is a Hindu or Christian or Moslem. Am I A Hindu? is indeed a book for Indians born in the west who are desperately trying to learn about their faith. In short, AM I A HINDU? Is a great book for anyone who wants to know everything about Hinduism. An amazing book without any dogma or demagoguery.

An Excellent book every Hindu can be Proud of

Published by Thriftbooks.com User , 19 years ago
I was born and raised in a very orthodox Hindu family and as such I have read many books on Hinduism. With all honestly, I have to admit, I never ever saw a book like this about Sanathana Dharma or Hinduism. This book covers everything one wanted to know about Hinduism, and answers every question one will have about Hinduism, specially the questions every Indian child will have, in a very lucid, well organized style. There are many well illustrated educational flow charts about different aspects of Hinduism in this book. I have not seen such charts in any other Hindu book. Am I A Hindu? can be described as an encyclopedia of Hinduism, dealing with the history of Hinduism, the sacred scriptures from Vedas to Puranas and major branches of Hinduism, such as Vaisnavism, Saivism, and Saktism. Mr. Viswanathan has done an excellent job of explaining very complex Hindu philosophies and beliefs with out sacrificing the subtle truths ancient Hindu scriptures convey to the world. Amazing that he achieved all this with out mentioning many Sanskrit verses from Hindu scriptures. I urge every one, especially Indians, to read this book.. I have decided to give copies of this book as Christmas presents to some of my co-workers who constantly ask me questions about Hinduism. Mr, Viswanathan, you have indeed done a great job and pray that you will write and publish more books on Hinduism.

THE MUST READ BOOK FOR ANYONE WHO IS SEARCH OF TRUTH

Published by Thriftbooks.com User , 22 years ago
Reading Hindu philosophical books is my hobby and I never ever read a book like this. This may be the only book in the market discussing about Hinduism as the culture of India not as an organized religion. This book is very very simple without too many Sanskrit words and it can be even read by a 12 year old. It deals with almost all aspects of Hinduism. It is in a Question and Answer fomat between a father and son and as such it is spelbounding. Book is filled with very descriptive flow charts on "end of the world"; "caste system", "world religions"; "Hindu scriptures"; etc and I for one will highly recommend this book for every one on earth. I did not see any kind of bias in this book like the "reader from Calcutta" is talking about.. In the chapter Untochables [page-250], author describes caste system as a "curse on Hinduism" and quotes a great Indian Untouchable leader Ambedkar who said: "To the untouchables, Hinduism is a veritable chamber of horrors" . There is no cover up of animal sacrifice in Hinduism in this book. On the contarary, this book discusses about animal sacrifice in the chapter "The Cow & Hindus". I am amazed to see this book even subjects such as Tantra, Kama Sutra and erotic sex, which Hindu authors normally do not discuss in their books. Surprisingly, book repeatedly states that "Hinduism has no monopoly on Truth & God" and at the end ask the reader even to read books such as Holy Bible & Holy Koran in their search after truth. So I highly recommend this book for anyone out there who is in search of truth.

Published by Thriftbooks.com User , 24 years ago
This book is a must read for every Hindu, student, Indologist,teacher and seeker. A great reference book for all those studying comparative religion. The author, Ed Viswanathan, covers a great deal of subject matter on Hinduism, whose true name is the Sanatan Dharma ( the Everlasting Religion).He shows great skill and understaning while keeping such a profound religion clear and well arranged. A reader can look up most subjects at a glance in the index. Mr Viswanathan shows the all encompassing inclusiveness of the world's oldest religion. He also shows many parallels between Christianity and Hinduisms great Scriptures. Hiduism is ideed blessed to have so many God-relized prophets both ancient and modern. The author effectively answers the many misconceptions other faiths have about Hinduism, and shows us that "Brahman", the one true God that Hindus knew about, long , long before Abraham, has no limit to his manifestations. Hinduism's all encompassing nature makes room for all true prophets of all true religions, as well as for the great difference in human needs on the path of the spirit. The author brings us right up to the present century with brief outlines of the great yoga systems that are now sweeping the modern world. This is no doubt one of India's greatest contributions to human civilization. The yogis of India perfected the ways to reach SELF-REALIZATION into a complete and flawless Science. Kriya Yoga was brought to the West by Paramahansa Yogananda who wrote the classic "AUTOBIOGRAPHY OF A YOGI", which has changed the lives of millions of people. He was able by his God centered life to show the west a living example of India's great saints and sages."AM I A HINDU?" will greatly help to break down the narrow views of many who find other religions so strange. The book presents an ideal setting, a caring father shares a lifetime of faith with his growing son. Hopefully many parents will follow this much needed example. Your children will have s! urely have a rich inheritance.
Trustpilot
Copyright © 2022 Thriftbooks.com Terms of Use | Privacy Policy | Do Not Sell or Share My Personal Information | Accessibility Statement
ThriftBooks® and the ThriftBooks® logo are registered trademarks of Thrift Books Global, LLC