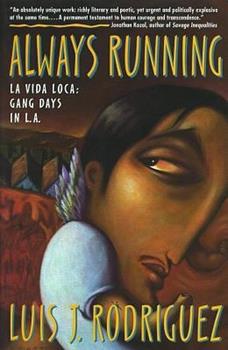 A former L.A. gang member describes his experiences in that world, recounting the sense of security and power found in a gang and the grim reality of violence and poverty.

Published by OBigMikeG400 , 2 years ago
Love it

Published by Thriftbooks.com User , 20 years ago
Inna Segeeva 04/08/02 Always Running Luis Rodriguez is the author of this famous and best-selling book. It is based on his biography that took place in Watts and East Los Angeles in the 1950's to the 1990's. Watts was an old community, primarily made up of black and Mexican people. It was a ghetto where country and city mixed together. East Los Angeles was also a run down community with a high rate of crime.Ramiro, Luis' first child, has gone off again. He reminds the author of his gang days. The author fears Ramiro will cause harm to himself if nothing is done. In the preface the author talks about his family and about his life as an early journalist. The author also says that in writing the book Ramiro will change. Always Running is the author's autobiography about moving from Mexico to Los Angelos. His family was poor and hoped to succeed one day. He did poorly in school because he and his family did not speak English. As the author grew up he experienced prejudice because he was Mexican. At ten he and his friends created 'clicas' (gangs) which they called Thee Impersonations. Luis Rodriguez was a young East L.A. gangster that had witnessed countless shootings, beatings, arrests, murders, suicides, and senseless acts of street crime by the age of twelve. Facing many tough times in his life, Luis turned to violence and gangs to get away from his problems. He felt closer to his fellow gang members than to his own mother, father, sisters, and brother. As a child, Luis never seemed to fit in: not even at school. He came from a dysfunctional family. At thirteen the author was already into drugs and gang violence. Throughout the book Luis Rodriguez talks about friends, school, gang fights, problems at home and his love life. At fifteen he was arrested and made to work. Towards the end of the book the author meets Licha who inspired him to change. By the time he turned eighteen years old, he had seen twenty-five of his friends either killed by rival gangs, police, drugs, car accidents, or suicides He decided to leave for San Pedro but ended up living in Chicago. He discovers that he has no future living in the streets and decides to turn his life around. To me this book is inspiring and I think that everyone especially teenagers should at least look at the book. It is a sad and true story about a former gang member who leaves his memoir for the next generation. Reading Always Running is like being in it and will surely encourage others to turn their lives around. This book really made me think about how much I take for granted. From reading all about Luis's problems and realizing how tough it was for him to grow up, I feel very lucky. I saw that Luis had built up his self- esteem and courage, even after experiencing life and reality the "hard way." Luis knew that by thinking positive and being strong, he could turn his li

Running out of words for this book...

Published by Thriftbooks.com User , 21 years ago
Rodriguez' book is one of the most impressive contemporary American novels I've read. He doesn't gloss over the acts of violence he participated in, but he does provide a framework for those terrible experiences that make his involvement in the LA gang scene almost inevitable. However, I was amazed that throughout the book, he never excuses himself or tries to romanticize his life. Instead, through a realist but still very readable style, Rodriguez shows that young men can change, that people without resources can make BIG differences in their communities, and that we only really see one side of the ongoing battle between the authority system and the street folk through most media. Rodriguez' story is esp. powerful b/c it's true. He lived through all this, and yet he was able not only to survive, but he inspired so many other young people from his neighborhood, and made countless positive changes in his local high school. Rodriguez sets an incredible example for young readers, giving lost kids hope, showing the public how much more can be done to fix all the injustice, and all the while giving voice to a remarkable and memorable story. I've taught this book in college writing courses, and the students (many of whom had not read a novel b/4 this) responded as enthusiastically as any students I've seen with any material. it's worth reading, and it's worth teaching. It was definitely worth writing, and I thank Luis Rodriguez for taking the time to do so!

Compelling and Moving Memoir of A Former Gang Member's Life

Published by Thriftbooks.com User , 21 years ago
Luis Rodriguez's autobiographical account of a gang member's life in Watts, East Los Angeles was the most expressive, powerful, and vivid depiction ever to be told. Through his novel, Always Running he has opened my eyes to the realism of gang life. I mean you see it in movies, the news, sometimes even on the streets, but to read about it and visualize it in your mind is like being there and living it. Through Rodriguez's novel he has shared his life with us, and in hopes of deterring younger generations of turning over to "la vida loca", the crazy life.Rodriguez joined his first gang at age eleven, and by age eighteen, he was a veteran of gang warfare, killings, police, drug overdoses, rapes, Mexican funerals, and suicides. He has watched his friends die one by one at such early ages as he waits his turn of his finalty. The turning point of Rodriguez's life turns out to be when he killed an innocent man as his initiation to a new gang. Because of this he was sentenced to jail where he was able to think hard about what he wanted to do with his. And now look at him he is an award winning journalist and author. but despite his successful transition he later experienced the karma of his childhood when his son Ramiro falls into the wrong crowd in their home Chicago, and joins a gang. Always Running is a novel dedicated to Ramiro Rodriguez and all the other lost children in the world who has lost hope and turned to the hellish streets of gangster life. Through his novel Luis not only shares his life experiences, but he also shares with us how he saved his son. So waste no more and read this very compelling, moving story of a father and son reunion.

Published by Thriftbooks.com User , 23 years ago
"Always Running" is the true life story of Luis J. Rodriguez, who comes from a mexican immigrant family of six, and their struggle for a better life. The story takes place in the ghettos of Los Angeles, filled with gangs, drugs and violance. I really enjoyed reading this book, because it was easy to read and understand. And since I was so much into the reading, and what was going to happened in the next page, it didn't even seem as long as it was.In the back of the book, the author included a glossary. This helped me understand some of the vocabulary that he uses in spanish. Eventhough my first language is spanish, I never heard some of the vocabulary words that he used.I also liked the way that he describes all of the characters. He gives clear descriptions of the characters and that helped me to picture what they looked like. When he gives the descriptions of the gangs, he describes the Sangria gangsters as "Looking loke the old days. "In small hats, long coats, and baggy pants." He then describes the other gang Las Lomas. "Looking like summer, white t-shirts, starched levis with royal cuffs and bandanas." Overall, I would recommend this book for evryone to read. Specially those involved in gangs who think that they have no way out of a gang. Luis had a rough childhood, but he learned, after loosing twenty five of his friends due to gang violance, to go back to school and be someone.He learned to be succesful and he is now a great writer.I give this book five stars.
Trustpilot
Copyright © 2022 Thriftbooks.com Terms of Use | Privacy Policy | Do Not Sell My Personal Information | Cookie Preferences | Accessibility Statement
ThriftBooks® and the ThriftBooks® logo are registered trademarks of Thrift Books Global, LLC