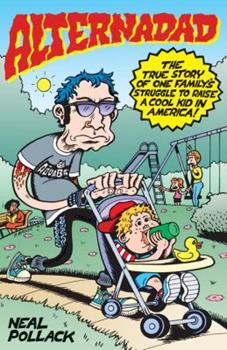 Alternadad: The True Story of One Family's Struggle to Raise a Cool Kid in America

With the publication of "Alternadad," Neal Pollack became the spokesperson for a new generation of parents. Pollack, a self-styled party guy known mostly for outrageous literary antics, recounts how he and his wife became responsible parents without sacrificing their passion for pop culture. From an ill-fated family trip to the Austin City Limits Festival, to yanking his son out of an absurd corporate gymnastics class, to dealing with the child s...

Not Just For Parents

Published by Thriftbooks.com User , 15 years ago
Whether you've just entered your twenties and are thinking about things like what to major in in College, or you can see 30 looming on the horizon (or fading behind you, for that matter) there's at least one thing that everyone has in common: parenthood. What? Seriously. Think about it: you are either a parent yourself, or you'll eventually become one, or your friends are parents or maybe you simply have parents (and the therapy bills to prove it). Any way you slice it, the act of parenting has a tremendous effect on all of our lives. Ergo, a memoir about turning from a bar-hopping, show-going, pot-smoking person into a child-having, mortgage-paying, healthcare-worrying-about, pot-smoking person can be interesting to us all regardless of our parenting status, right? Right. In each of Pollack's two earlier works (The Neal Pollack Anthology of American Literature and Never Mind the Pollacks: A Rock and Roll Novel), the focus has been on eponymous personae whose overblown existences mock journalistic types, rock music, celebrity and just about everything else. While these first two books take a certain amount of institutional knowledge to really get the jokes, Alternadad is a more accessible work that deals with issues that are less endemic to people of a particular social group. Any personas Pollack has used in the past are dropped along with some of the ceaseless satire, but his sense of irony remains in tact. Alternadad is billed as being a memoir and "... a critique of and celebration of [hipster] culture, as well as a call for a new style of parenting." At a deeper level, it's simply a grown-up coming of age story about having your rock and roll cake and eating it too, kid or no kid. Sure, the focus is obviously on Neal and his wife Regina attempting to maintain their identities after the birth of their son Elijah. There are poop stories and "waking up at 6:00 AM with the kid" stories. However, the appeal of this book for a wider audience is that at some point all (well-adjusted) adults end up sacrificing some portion of the pursuit of cool for things like healthy relationships, a solid income and yes, health insurance. This happens even when you live in Austin, albeit (as with all things) Austinites tend to do it with a certain level of inked-up, left of mainstream style. Pollock is no exception, as his title suggests. In this book, he uses equal measures of wit, unapologetic neurosis and heart-warming (if slightly ironic) epiphanies to tell the tale of how that transition into true adulthood came about for him: namely, fatherhood.

Published by Thriftbooks.com User , 15 years ago
Neal Pollack has learned something that most of us learn sooner or later. There are days that happen every so often in your life that mark a dividing line. The days that follow are simply different than all the days that went before. And the birth of your first child is one of those days. Most of us can't write about it as well as he can. This is the story of the first couple of years. Those are the years when you are realizing that this little bundle of joy can be very loud, has his own ideas about things like when to wake up in the morning (earlier than you had planned) and has learned how to turn his head sharply just as you get the spoon of strained peas up to his mouth. Yes, you may be trying to maintain your old lifestyle at this stage. You may even be suceeding to a certain extent - but don't try to tell me it hasn't changed. Aaaahh! There's all the things that are yet to come. Let's see, the kid is about three now. That's about the time you and your wife decide that he should have a playmate. And if it turns out to be a girl, the differences between a boy and a girl - nevermind you'll find out... It won't be long before soccer comes in and a life of taxi driving begins. And somewhere along the way he will develop his own taste in things like music, decorating his room, the clothes he wears, friends. I'm looking forward to a long list of books as Elijah completes Dad's education. If they are a fun to read as this one it's going to make quite a series.

This is a funny, honest, true, beautiful, good book. read it....

Published by Thriftbooks.com User , 15 years ago
I read. A lot. I own no television. I have 3 boys, and we all read every night. That's what we do. I love books, and I love reading. I am not a sucker for the first book to come along. I read constantly. The house is littered with books. I do not finish all of them. Some people channel surf; I book surf. But if i like a book, I will read it through. And Alternadad grabbed me , shook me by the scruff, and tickled me. That sounds pretty dumb, and yet, there you have it. This is a good book, even from the perspective of a book junkie. I really liked Alternadad. I was reading it in bed, and laughing gently, but then my wife came in and I started to laugh boisterously, obnoxiously, uncontrollably, vibratorily. She assumed I was laughing hard to annoy her. It was untrue, the book just suddenly got funny. She kicked me out of the room. And it's not just funny. It's also kind of profound here and there. and it's very true. and reeks of honesty and the real underlying beauty of family life. I'm a dad, and this book, well, should be required reading for dads. This book is in general a good book for people who have or may reproduce. And those who love them. In fact, if they ever do get around to licensing people to have kids, the required reading list should include ALTERNADAD. I'm going to shoot off an email to my congressman right now suggesting this. good father's day gift while the legislation is pending.

A must read for all father's

Published by Thriftbooks.com User , 15 years ago
As a high school teacher I come across new books all of the time, and recently when I was reading Time magazine on my throne there was a column written by one of my favorite columnists (James Poniewozik). The topic of that article was about Gen-Xers growing up and having children, while trying to maintain their youth and ideals. Poniewozik mentioned a new book called Alternadad by Neal Pollack, whose most recent book is about coming to terms with marriage and having children while still maintaining his own identity. My wife and I have read Dooce for years now, and we use to talk about Jon & Heather Armstrong like we knew them personally. Pollack, in Alternadad, writes like he could be the male version of Heather Armstrong. I began this book on a cross country flight and read over half of it before I landed. That weekend while I was at conference I finished the entire book. It began with Pollack dating various women and running around town to a plethora of concerts. It continued to him meeting his wife and her getting pregnant. And it culminated in the experiences of trying to raise a baby and toddler on the Austin city limits. Pollack, who has written several non-fiction books, pours his own experiences as a stay-at-home father trying to raise his son and live his life with his family. It details the time they lived in Texas before moving to Los Angeles, and, as a father of a toddler, I found the book strikingly funny and sincere. From the travesties of day care to the in-laws brushing his kid's teeth with Bordeaux's butt paste, we should all read this book.

Published by Thriftbooks.com User , 15 years ago
Long before he secured actual, competent representation, I briefly served as Neal Pollack's professional literary agent. Therefore, my opinion may be somewhat biased, in the sense that I feel for him the same kind of weary I felt for all of my old bloodsucking clients, the ones who kept bothering me all day with their money troubles while I was trying to drink brandy and play minesweeper (that means you, Bruce Campbell!) But I will confess that ALTERNADAD was a complete and happy surprise to me--hilarious, as all Neal's work is, but heartfelt and true. This book is fully deblustered of the old "Neal Pollack, Greatest Living Writer" persona of his seminal early work, replaced instead by an even older "Neal Pollack" going back to his days at the "Chicago Reader:" the just-plain-good-writer full of caustic wit and human sympathy. This is a story that documents a new kind of hipster parental mood in some respects, but it is really a much simpler story about a man who loves his wife and son. Neal's ability to say just that puts paid to any rumor that he was ever merely a 90's era irony-drenched ha ha man, and makes ALTERNADAD the best third-book debut I've ever read. That is all.
Trustpilot
Copyright © 2022 Thriftbooks.com Terms of Use | Privacy Policy | Do Not Sell or Share My Personal Information | Accessibility Statement
ThriftBooks® and the ThriftBooks® logo are registered trademarks of Thrift Books Global, LLC