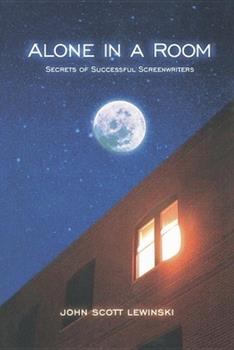 Alone in a Room

This book tackles the hard truths that other screenwriting books are afraid to confront. Film and TV writing is the most competitive literary field in the world and if an aspiring does not get the work done properly, he or she will fail.

Screenwriters-Read this NOW before you write another word

Published by Thriftbooks.com User , 17 years ago
There are hundreds of books about screenwriting filled with information about how to write a good script but they are all useless unless potential screenwriters read ALONE IN A ROOM first. Don't waste your time spending long hard hours toiling over a spec script, pet project, or screen adaptation until you've read this book. As Lewinski says "I've got no reason to lie to you" - and he doesn't. This book is chocked full of facts delivered to the reader in an easy, reader-friendly manner. Its like you sat down to have coffee with a highly respected and all-knowing Hollywood insider and he's decided to tell you the truth, the whole truth and nothing but the truth....and if his wisdom isn't enough, he interviews some of the most talented and successful screenwriters of both feature films and television and they tell you the whole truth also. If you're thinking of writing a spec script, you're currently writing your second or third script, or you've already completed ten scripts - get this book. You need this information. Its not available anywhere else. Lewinski is an important Hollywood resource, himself a successful screenwriter and mentor. When he states at the end of this book that he wishes he would have had a book like this before he started knocking around Hollywood, he is echoing all of our thoughts exactly - those of us who had to find our own way. Now you don't have to go into the whole scene of being a Hollywood player blindly....ALONE IN A ROOM is there for you. Get it now. Utilize this great advice and become an extremely successful screenwriter so you don't have to remain "alone in your room." Laurie Scheer, Media Consultant and Professor, Yale University.

Stranger in the strangest of lands

Published by Thriftbooks.com User , 17 years ago
A play entitled City of Angels co-written by David Zippel and Larry Gelbart (whom Mr. Lewinski interviews here) details the story of a novelist who longs to see his books made into films. Said novelist sees his creations altered and the producer taking as much credit for the story as the actual writer. Welcome to Hollywood. Mr. Lewinski paints an excellent picture of what it is like to be both a struggling and successful screenwriter in the industry by combining personal accounts as well of those interviewed. Basically, he tells it like it is whereas other authors sugarcoat the long, arduous journey from creative inspiration to final product. What I admired about the book is that it's not a "how to"; rather it is a "how it is" insiders look at the pitfalls, successes and stagnations of various writing careers. The interviewees range from those just starting out to established vets...from those whose names you might never recognize to Oscar nominees. He adroitly interweaves the tales and tribulations of these people with advice on making it in the business. What I admire is that Mr. Lewinski always looks at it as a business and rightly so. As an aspiring writer, I sometimes fail to remember that films are a mass market product and while you long to see your vision up on screen as that novelist in City of Angels, remember that you will have to swallow your pride, alter your vision and sometimes you will get to make your dreams come true. I wholeheartedly recommend this book to anyone with fantastic (or realistic)illusions of writing the great american screenplay as it really puts things in perspective.

Published by Thriftbooks.com User , 17 years ago
Everyone is working on a screenplay, it seems, but who is actually FINISHING them? Lewinski's book looks into the day-to-day life of actual, working and earning screenwriters and gives those of us who are still striving some sound advice on getting the job done. Recommended!

Published by Thriftbooks.com User , 17 years ago
No other career draws more moths to the flame than that of screenwriting. Everyone believes they can make a "better" movie, and many do try. Many fail. Writer and journalist John Scott Lewinski serves up a hot platter of truth in "ALONE IN A ROOM: Secrets of Successful Screenwriters," and for those bold enough to read on, the secrets that are revealed will either inspire you to embrace the flame, or send you running for the safer shores of a regular job and a steady paycheck. No stranger to the Hollywood game, the author states up front the biggest truth of all; that screenwriting is just that...a game. He then proceeds to give the reader all the necessary tools, tips, strategies, and game pieces in order to play that game, and do it with professionalism, commitment and a real love of both movies and the movie business. A telling quote from the introduction sums up the power and promise of this book. Lewinski states, "I believe the difference between those doing the work and those longing for the jobs is the ability to accept the realities of the business and be able to perform effectively within those realities." If you are willing to accept Lewinski's beliefs about the realities of screenwriting success, then read on, for he has much wisdom to offer, as well as much wisdom from some of the most successful writers, agents, managers and movers and shakers in Hollywood, who give their own insider viewpoints throughout the book. These interviews, most notably those of the writers themselves, shed light upon the dark corners of both getting down to the creative hard work of writing as well as being able to function well as a salesperson once the writing is done. Without these inside views and perceptions, many writers would flounder. Guidance, even in a cut-throat place like Hollywood, is golden. "ALONE IN A ROOM" is not a how-to-write-a-script book, rather it is a field guide to navigating the system of being a working writer in the business, from coming up with marketable ideas, to writing alone in a room on spec before the terrifying specter of the blank page, to accepting writing assignments and collaborating with others, to overcoming the challenges of adapting someone else's work for the screen. We also get inside glimpses into the realities of writing as part of a team or staff, the art of comedic writing, dealing with those dreaded "notes" and how to best utilize constructive criticism, dramatic writing for TV, being professional in meetings and making a good impression, getting your work out there to the people who can say yes or no, and how to deal with rejection as well as acceptance and, hopefully, success. As "they" say ("they" being those elusive experts at everything that we all quote from time to time!), sometimes success is more frightening than failure. Reading this book, as an aspiring screenwriter myself, I felt as though the author cared not just about my fate, but about the fate of all writers, and that personal respect and
Trustpilot
Copyright © 2022 Thriftbooks.com Terms of Use | Privacy Policy | Do Not Sell or Share My Personal Information | Accessibility Statement
ThriftBooks® and the ThriftBooks® logo are registered trademarks of Thrift Books Global, LLC