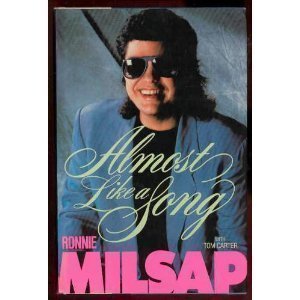 by Tom Carter and Ronnie Milsap

A DO NOT MISS READ!!

Published by Thriftbooks.com User , 19 years ago
If you are a fan of Ronnie Milsap or just a fan of life in general, this is a MUST READ! Ronnie and Co-Writer Tom Carter, present Ronnie's life in a sometimes comedic and sometimes sad manner. Ronnis IS a true to life "RAGS TO RICHES" story and I personally am thankful Ronnie has been through everything he has in his life. It has not only made him what he is today but has caused me to reflect on my own life which has posed many "situations" for me to grow from. Ronnie is an awesome individual and if you want a chance to get away from all the "[stuff]" on television these days, this is a book for you. The man born blind in poverty in the mountains of N. Carolina, disowned by his mother because she thought his blindness was a curse from God, raised by poor but loving grandparents, sent to the State School for the Blind on welfare, turned out to have the IQ on the genius level. Ronnie tells of how fascinated he was the first time he experienced a commode when he was about 6 years old. Now his home probably not only has 7 or 8 of them but probably has heated seats as well. PLEASE, if you never treat yourself to another gift, purchase this one. It is truly a gift that you should not miss out on. I HIGHLY RECOMMEND IT!Donna Ashworth-Dallas, Texas

Published by Thriftbooks.com User , 21 years ago
Born blind in the poverty stricken Appalachian Mountains of Western North Carolina, Ronnie Milsap grew up to become a self-made multi-millionaire and internationally known country music superstar. His prosperous life proves in America that any dream is achievable. But his Cinderella-caliber transformation was not merely professional. Dismayed that her baby was blind, Ronnie's disturbed mother abandoned him. He was raised primarily by his loving paternal grandparents although his well-intentioned yet somewhat hapless father was a constant presence in his life. Today he has been happily married for well over 30 years and is a doting grandfather when not out on tour entertaining his legions of fans.Attending a state-run high school for the blind, the talented youngster gained independence but was subjected to the unchecked discipline of certain thuggish teachers. In college he considered a career as an attorney, but wisely determined music was more his speed. In addition to the typical biographical data, Ronnie expounds on numerous subjects. Politically speaking, he expresses outrage over the Supreme Court decision (recent when this work was first published) legalizing flag burning. The conservative patriotic principles he advocates are a welcome change from the usual show biz liberal diatribes. That's just one of many stereotypes Ronnie Milsap's life has shattered.

A MUST-READ book for all Ronnie Milsap fans!

Published by Thriftbooks.com User , 22 years ago
I have always had great admiration and respect for Ronnie Milsap. He has been a true inspriration to me for nearly 25 years. My piano teacher knew how much a role model he was to me as a child, and she used that to keep me from giving up. After reading the book, my love, respect, and admiration for him is 5 times greater! The book is beautifully written with so much honesty, emotion, and love. It made me cry, and it made me laugh outloud! This man is a phenomenon that we could all learn a lesson or two from. "It Was Almost Like A Song" inspired me all over again! I haven't read a book with so much feeling since I was in high school; I couldn't put it down at night to go to sleep! No Milsap fan would want to miss this one!

Super fantastic book from one of the legends

Published by Thriftbooks.com User , 22 years ago
This is one terrific book that includes photo's and a complete discography of Ronnie's recordings. I've been a fan since 1976 and found out I was missing a few records according to this book. I'm happy to say that I finally found the one's I was missing. Without this book I would have never known about a couple of albums.

If you are a fan it is a MUST READ. Honest and truthful.

Published by Thriftbooks.com User , 24 years ago
I am a big fan of Ronnie Milsap and was even more impressed with this man after reading his autobiography. It is honest, truthful and full of surprises. His co-writer Tom Carter is excellent. After reading Ronnie's life story I have even MORE respect for him as a person not just an artist. It's amazing to me the lack of attention wonderful artists such as Ronnie Milsap and Johnny Cash, etc. are getting. If you can get your hands on a copy of this book, it is a MUST READ. It's a page turner. Not just another rags to riches story of this man born blind in the Smoky Mountains. Donna and Rusty Young (dictate@swbell.net) Dallas, TX 75149
Copyright © 2022 Thriftbooks.com Terms of Use | Privacy Policy | Do Not Sell My Personal Information | Accessibility Statement
ThriftBooks® and the ThriftBooks® logo are registered trademarks of Thrift Books Global, LLC