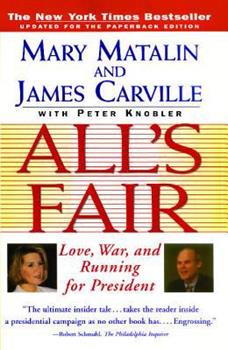 by James Carville and Mary Matalin

Never before has a more revealing X ray been taken of the modern American presidential campaign than this compelling memoir of the nation's foremost political operatives, Democrat James Carville and Republican Mary Matalin. Not since Theodore White's legendary Making of the President series has a book on presidential campaigns so intimately recounted the power plays and clandestine maneuvers that are at the heart of American political dueling. James...

from the Romeo and Juliet of American politics

Published by Thriftbooks.com User , 18 years ago
Ever since I saw the documentary "The War Room," I have been a huge fan of James Carville's. It also helps that I am a big liberal Democrat. However, for the longest time I did not know that he was married to Mary Matalin, a longtime top Republican strategist. I also was unaware of the fact that they were more or less opposite numbers in the 1992 campaign, when Carville worked for Bill Clinton, and Matalin for President George H.W. Bush. This book shows the inner workings and machinations of both the Clinton and Bush campaigns in 1992, from the viewpoints of Carville and Matalin respectively. The book is written in turn; first Carville tells a little of what was happening in the Clinton camp, then Matalin offers the contemporary perspective of the Bush camp. This style works really well. At some points it develops into quasi-conversation, as if they were speaking to each other. There is ample room for the airing of their own personal views of what was going on as well. There were two overriding themes in the book: the way Carville ran Clinton's operation, best known as The War Room, clearly changed the way political campaigns are conducted in this nation, and, partially because of the innovations of The War Room the Bush effort was off its game big-time. At times it was amazing to see the sheer ineptitude of the Bush campaign, such as when Mary Matalin describes how the White House and the Bush campaign were unwilling or unable to effectively coordinate their activities until the Republican convention. There is also a lot of discussion of how the media, especially television and newspapers, influence the way a campaign is run these days. Predictably, there is a healthy amount of negativity expressed toward the press, especially Matalin's railing at the so-called liberal media, even though Carville makes some good arguments that Clinton was not receiving the best coverage, either. A must-have for anyone interested in the nuts and bolts of political campaigns, especially for people who want to get involved in the higher operations of politics.

Published by Thriftbooks.com User , 18 years ago
Even though the Clinton vs. Bush campaign was 12 years ago, this book is well worth a re-visit. The book is relatively long but I found every page of high interest. Mary Matalin's sections on the Bush re-election were wonderful reading and I am an avowed liberal. She perfectly captured the patrician nobility of Bush Senior and the campaign that destroyed itself. From the disasterous reign of John Sununu as Chief of Staff, the tragic death of Lee Atwater, the paralysis of Margaret Tutwiler, the insanity of Ross Perot, the mean-spiritedness of Patrick Buchanan, the shrill defeatism of Rich Bonds, and the often confused and muddled voice of an out of touch President, George Bush, the characters are vividly drawn and almost sympathetic. Carville on the other hand is masterful in his analysis of the consciousness of the American Everyman. The strength of Carville's strategy is common sense played offensively. He respects the middle class American sense of irony and skepticism trying to move toward optimism and problem solving. Even though the book is 478 pages long, it is really a fast read. Both Matalin and Carville are witty, strategic professionals with years of experience. I didn't get the book to read a sappy love story and I was glad the book focused on the considerable professional experiences of this couple rather than on their fledgling romance. Carville's desciptions of Bill Clinton do the man justice as a flawed but brilliant leader. Matalin's desciptions of George Bush do the man justice as a man who believes his class, gender, and race was destined for leadership but he just can't navigate the reality of the average American experience. Where both Matalin and Carville converge is in their perspectives on Patrick Buchanan, a mean hateful old man, and Ross Perot, a crazy old man. Besides a blow by blow detailed story of the Clinton vs. Bush campaigns from beginning to end, the book is full of political wisdom and strategy.

Published by Thriftbooks.com User , 18 years ago
Even though this book is almost 500 pages, I really sped right through it. If you are a political nut like I am, you will absolutely love this book. It mainly focuses on the 1992 presidential election (if you are looking for intense details of Matalin and Carville's relationship, you are looking at the wrong book) But it offers so much. It really is a he said/she said blow-by-blow account of the entire election. The format for this book is the best possible one. It keeps in interesting, entertaining, easy-to-follow and enjoyable. I could hardly believe that at certain points Matalin caused me, an avowed liberal, to feel sorry for Bush over his loss for reelection. I could hardly put this book down, and loved it throughout. Read this book if you are into politics, election campaigns, or stategies. You will not be disappointed.

For either side of the political spectrum

Published by Thriftbooks.com User , 20 years ago
This book is one of my favorites. I read it for a class in college, and often go back to re-read it. I've purchased several copies as gifts for my politico friends as well. The style goes back and forth between Ms. Matalin and Mr. Carville, almost as if one is listening in on a conversation. They even interrupt one another! It's great fun to read, and definetly fun to quote. Both authors are brilliant people, with big opinions. --Jessica

For every political junkie in America

Published by Thriftbooks.com User , 22 years ago
James Carville and Mary Matalin are always entertaining to watch on television, no matter what they're talking about, so there was no way this book could have been anything less than massively entertaining. It works outstandingly on two different levels -- first of all, it's a blow by blow of the 1992 presidential election, with a lot of the background scuttlebutt and the inside information. You get a real sense of how disarrayed the Bush campaign was, how amazingly the Clintonistas got over some of their hassles. Secondly, though, it's a profoundly in-depth look at the way in which two people who supposedly could have nothing in common develop love, and in that sense it's very touching. James Carville's puppy-dog slavishness to Bill Clinton reads a little off-key now that Big Bill is coming to the end of his eight controversial years (Monica was still in the future when this book was written), but all in all this is a wonderful book.
Trustpilot
Copyright © 2022 Thriftbooks.com Terms of Use | Privacy Policy | Do Not Sell or Share My Personal Information | Accessibility Statement
ThriftBooks® and the ThriftBooks® logo are registered trademarks of Thrift Books Global, LLC