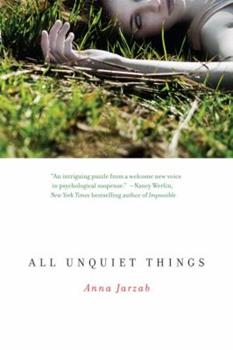 A riveting thriller set at a California prep school! Carly: She was sweet. Smart. Self-destructive. She knew the secrets of Brighton Day School's most privileged students. Secrets that got her killed. Neily: Dumped by Carly for a notorious bad boy, Neily didn't answer the phone call she made before she died. If he had, maybe he could have helped her. Now he can't get the image of her lifeless body out of his mind. Audrey: She's the reason Carly got...

All Unquiet Things is Not Just a Quiet Novel...

Published by Thriftbooks.com User , 12 years ago
Two outsiders at Brighton, a California private school, are united by their separate relationships with the deceased Carly Ribelli. Neily Monroe, her former boyfriend, is a scholarship student. Audrey Ribelli, her cousin and the daughter of the man convicted of Carly's murder, runs with the school's fast crowd. The two begin a tentative friendship when Audrey asks Neily to help prove her father's innocence. Having determined the evidence against Audrey's father is weak and in order to reveal the actual murderer, the two delve into secrets the "in crowd" would rather not be revealed. Anna Jarzab has accurately captured the nuances of teen relationships and self-discovery. Her characters are recognizable; their hopes, problems, and fears are those all teens experience. While most of the characters in this novel come from a privileged background, they never deteriorate into stereotyped or totally unsympathetic individuals. Even Bean, one of the "bad" boys and a potential suspect in Carly's murder, is interesting and may elicit a sympathetic response. The language used by the characters is realistic; the dialog adds to the overall tone of the book. Jarzab's use of two voices, Neily's and Audrey's, to narrate the book provides differing perspectives on the mystery and its ultimate solution. In having the narrative span a four-year timeframe, Jarzab is able to provide depth of information and perspective on the people and events involved in the story. I found "All Unquiet Things" to be a thoroughly engrossing novel; I finished it in one sitting. Jarzab is a skilled writer whose prose moved quickly to capture the reader's attention and hold it from the first page to the last. That being said, this is probably one of the few books classified as "Young Adult" that I might not give every tween or younger, naïve teen to read. Several of the characters "hook up" without any emphasis being placed on the more detrimental effects of teen sex. Carly's rape is the only real negative result of teen sex and partying discussed in the book. While the sex is not specific or graphic - if this were a movie, the scene would fade to black as the action progresses - I do think the novel's theme would have been just as relevant without the numerous sexual relationships among the characters. Parents who are looking for an excellent Young Adult book may want to read "All Unquiet Things" first. This should allow parents to then have an active discussion about drug use, peer pressure, and "hooking up" as a teenager with their child as the novel is being read.

Published by Thriftbooks.com User , 12 years ago
Lately it's rare to find such a remarkably well-written YA novel. With at the so-so written YA novels in shelves, ALL UNQUIET THINGS is sure to stand out. The voices of the two main characters--Neily and Aubrey--are so strong and so realistically portrayed that I found myself reading their story well into the night. While their voices are a bit familiar that you need to check whose part it is, their narration really sucks you in. Their grief, frustrations, anger, and their other feelings just leapt off the page and felt so true. I do read quite a few of mystery books that I can easily tell who the culprit is a few chapters into the story, but Jarzab kept me guessing and doubting myself. I just couldn't believe the twist at the end! It was superbly well done. The book does start a bit slow, but the story picks up a few chapters in. All the characters -even the secondary ones--were written in a way that it felt as if they could be someone you knew. Jarzab is so great at writing characters and plotting out a novel that I didn't believe that this was her debut novel. Overall, ALL UNQUIET THINGS is a book that I strongly recommend and that should be on everyone's to-read list and one that I can't stop gushing about. Jarzab has made be a fan of her works for life.

Published by Thriftbooks.com User , 12 years ago
All the Unquiet Things was a refreshing book for me, just what I was looking for. After discovering I was burnt out on supernatural stories this heartbreaking mystery set in the here and now, without any characters with powers was just what I was looking for. Besides the mystery aspect the book spoke of lost love, friendship, and family troubles. It reminded me a bit of one of my favorite television shows, Veronica Mars. I love the idea of teens solving a mystery (and not a childish mystery), their tactics are obviously going to be different than an adults, or the police. It's just more fun. I loved that the book was told both from Neily and Audrey's perspectives. Though sometimes I had to remind myself who the narrator was because they were often in each others scenes. It was also refreshing to come across two main characters that weren't involved romantically but worked together as a team, as friends, they helped each other find closure over the death of their love (Neily) and best friend/cousin (Audrey). There were only a few suspects in the story but when it came down to it, I totally didn't see it coming when the actual murderer was revealed. The entire book was a complex web of lies and truths and I just had a great time reading the book. I also think it would lend itself nicely to a movie format.

Published by Thriftbooks.com User , 12 years ago
Carly was impulsive, smart, and hurting. Both her boyfriend Neily and her cousin Audrey adored her, but neither of them knew how to get her the help she needed when her mother died, and neither of them did anything when Carly dumped Neily and began hanging out with the dangerous popular crowd. But both Audrey and Neily are shocked when Carly is found dead one night, murdered in cold blood, and a year later they are still struggling to deal with their guilt and confusion, despite the accused murderer, Audrey's father, being behind bars. But then Audrey approaches Neily, asking for help. The pieces of Carly's murder aren't adding up, and she doesn't believe her father is the killer. She suspects the murderer is someone at their school, who would go at any length to keep certain dark secrets covered. But in order for them to find the truth, Audrey and Neily will have to be honest with not only each other, but themselves as well, and risk ripping open old wounds and getting involved with dangerous people. Anna Jarzab's debut novel is a superbly written and immaculate mystery that is completely gripping and unsettling. Her writing style is smart and sophisticated, peppered with observations that will make you really stop and think. Her main characters, Neily and Audrey, are both very different but very authentic. Neily is smart and capable, but struggles to deal with an immense load of guilt. Audrey is a little more reckless and assertive, but deep down, she's searching for love and acceptance. The story flows perfectly as Jarzab carefully pulls back layer after layer of the events of over four years as the viewpoints switch back and forth between Neily and Audrey, and the past and present. The bulk of the story takes place in prosperous Empire Valley, and a lot of action plays out at Brighton Day School, where many of the students are privileged and unbelievably wealthy, but All Unquiet Things has so much more depth than your average rich teen novel. Instead, Jarzab exposes the dark side of rich living with unsupervised teens that have access to as much money, drugs, and alcohol as they want, and what happens when things quickly spiral out of control. The plot is twisting and complex, but it all comes together in a surprising, breathless end in such a flawless way, never once lacking in suspense. All Unquiet Things, simply put, had me under a spell. This is a complex, smart, and disquieting debut.

Published by Thriftbooks.com User , 12 years ago
"All Unquiet Things" centers on the murder of Carly Ribelli & is narrated by her ex-boyfriend & cousin, Neily & Audrey. Neily & Audrey are both outsiders at their California prep school, but they come together to solve the murder of Carly. The police have already locked away Audrey's father, but Neily has always had doubts; Audrey cannot believe her father would murder his niece. Forging an unlikely friendship, Neily & Audrey set out to uncover the secrets of the popular clique at their school, both convinced that someone from this group is responsible for Carly's death. "All Unquiet Things" is well written & bit heavier than most of the YA I have read, but I finished the book in 3 days. It kept me interested & was a fast read. The murder mystery keeps the plot going, but "All Unquiet Things" is much more-- a story of grief, acceptance, & self-discovery.
Trustpilot
Copyright © 2022 Thriftbooks.com Terms of Use | Privacy Policy | Do Not Sell My Personal Information | Accessibility Statement
ThriftBooks® and the ThriftBooks® logo are registered trademarks of Thrift Books Global, LLC