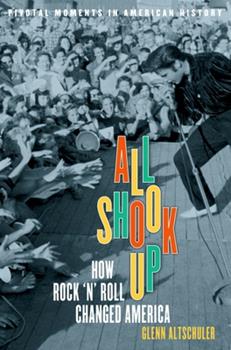 All Shook Up: How Rock 'n' Roll Changed America

The birth of rock 'n roll ignited a firestorm of controversy--one critic called it musical riots put to a switchblade beat--but if it generated much sound and fury, what, if anything, did it signify? As Glenn Altschuler reveals in All Shook Up, the rise of rock 'n roll--and the outraged reception to it--in fact can tell us a lot about the values of the United States in the 1950s, a decade that saw a great struggle for the control of popular culture...

Published by Thriftbooks.com User , 13 years ago
A well-written history of the early days of rock-n'-roll and the debate and controversies it provoked.

It's time to rock

Published by Thriftbooks.com User , 15 years ago
Rock n roll may seem like an odd choice for a pivotal moment in American history but altschuler supports his thesis very well and by the end I was convinced. This book is an overview of the business, politics, race relations, and generational relations stemming from rock and roll. It looks at rocks early years through the "day the music died". If you are looking for a book that will serve as an introduction to the rock n roll movement then look no further. I was very impressed with the information presented and as someone who knew nothing about the history of rock when I started I was pleased with how much I learned. It leaves a few places hanging such as what happens to Elvis after he joins the army but mostly it covers everything in the right amount of detail. Highly recommend.

A wonderful indisciplinary review of seismic social change, reflected and caused by rock and roll.

Published by Thriftbooks.com User , 15 years ago
"All Shook Up - How Rock `N' Roll Changed America" by Glenn Altschuler is a terrific and well documented book on the seismic social, sexual and racial changes in the United States that was both reflected and precipitated by a new music sweeping the nation in the 1950s and 1960s. This new music with its roots deeply entrenched in largely black American R & B and Gospel literally shook a nation that wanted to believe itself innocent but was undergoing rapid change with the return of combat vets, the ensuing Baby Boom and the suburbanization of our country. Disposable income was rapidly on the rise and technological marvels of the day, such as the transistor radio, rapidly spread this revolutionary new music. Altschuler does a superb job in his narrative documenting this revolution from both a societal and a musical perspective. He is perhaps at his best in describing the backlash against rock and roll as it began break in a color barrier that was still sacred to many, mostly white, Americans. He quotes authors of the day, "with tom-toms and hot jive and ritualistic orgies of erotic dancing, weed-smoking and mass mania, with African jungle background. Many music shops purvey dope; assignations are made in them. White girls are recruited for colored lovers . . . and guarantee a new generation subservient to the Mafia". Obviously some strong backlash. Oxford University Press is to be commended along with the editors of this series, Pivotal Moments in American History, David Hackett Fischer and James M. McPherson for living true to their words of historical interpretation and reporting "they were the results of decisions and actions by people who had opportunities to choose and to act otherwise". Also by showing "increasing sensitivity to issues of race, ethnicity, class, and gender in the context of large structures and processes". This volume is a classical one of American Studies, an interdisciplinary review of a period of time where social change was rapid. Researching or writing about this time through the lens of only one discipline would clearly have short-changed this era. Neither Altschuler nor Fischer and McPherson allowed that to occur and, in a sense, showed academic bravery for writing a serious book about our social history with rock and roll interwoven throughout.

Published by Thriftbooks.com User , 19 years ago
A fine and compelling read, even if the author fails to nail down the premise in the subtitle. One or two factual errors don't detract from the overall fascinating story of the rise of rock and roll in the mid-1950s and the payola scandals of the late 1950s. Recommended.
Trustpilot
Copyright © 2022 Thriftbooks.com Terms of Use | Privacy Policy | Do Not Sell or Share My Personal Information | Accessibility Statement
ThriftBooks® and the ThriftBooks® logo are registered trademarks of Thrift Books Global, LLC