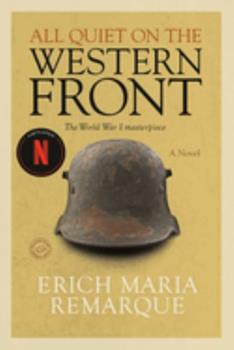 All Quiet on the Western Front

Considered by many the greatest war novel of all time, All Quiet on the Western Front is Erich Maria Remarque's masterpiece of the German experience during World War I. I am young, I am twenty years old; yet I know nothing of life but despair, death, fear, and fatuous superficiality cast over an abyss of sorrow. . . . This is the testament of Paul B umer, who enlists with his classmates in the German army during World War I. They become soldiers with...

All Quiet would have been good to read.

Published by All quiet on the western front , 8 months ago
The complete book was so marked up and all sentences underline to make it unreadable.

Review of Cliffs Notes on All Quiet on the Western Front

Published by Thriftbooks.com User , 12 years ago
I have to admit that I read the Cliff Notes after I read the book twice and saw all three movies. However, the notes are still helped with understanding points that were not previously stresses. Knowing more about the Author helps in see why he chose the perspective. Keep in mind that any conclusions drawn in the notes are those of Sudan Van Kirk. After reading this supplement you may want to re read the book. The notes include: . Life and Background of the Author . Genera; Plot summary . Remarque's Introductory Note . Critical Commentaries . Remarque's Style . Remarque as a Social Critic . Character Analyses . Questions for Review "He fell in October 1918, on a day that was so quiet and still on the whole front, that the army report confined itself to the single sentence: All quiet on the western Front."

Published by Thriftbooks.com User , 12 years ago
Erich Maria Remarque did a great job with his story. Being first person in view gave you the feeling that you were there. To add to this he is a very good writer. Not being in the Great War, I can only imagine the technology of the time and trust in old war movies. In addition, this is a foreign culture in a foreign time. People there had a tendency to trust and respect their elders unquestionably. Being of the Vietnam era, I could however relate to the parts about the different personalities and some of the war situations and attitudes. I could appreciate the river crossing at night and the defending of the deserted town. I even liked the cat that they befriended in the story. We had a dog that was named Followme, which was one of the few that did not end up in a pot. I even could feel the anxiety of not fighting and just waiting for action. The only major difference is the question of do you want the people to be behind you to push you on or cheer you on, or doing the same job with people that are indifferent or not supportive? Anyway even with the graphic description of the actual battle is more of a description of war, not a reason to sue for peace at any cost. The story is more of a, "don't let someone pull the wool over your eyes," with the talk of the glory of war. A movie with that theme is "The Americanization of Emily" (1964)". Also, don't let Authority blindly lead you into the army with the condos as in, "Private Benjamin" (1980). This is not the end but the key statement that pretty much sums it up, "He fell in October 1918, on a day that was so quiet and still on the whole front, that the army report confined itself to the single sentence: All quiet on the western Front." The Americanization of Emily

The Great War Novel of the 20th Century

Published by Thriftbooks.com User , 19 years ago
I am often disappointed when I return to a novel that I read and admired in my youth--but when I recently finished re-reading ALL QUITE ON THE WESTERN FRONT I found myself as moved and impressed I was some twenty years ago when I first encountered it. If ever there was "the great war novel of the 20th century," this is it, and I do not use that description lightly.The novel is flawless. Told from the point of view of a young solider named Paul, ALL QUIET presents the story of German youths who enlist during World War I under the influence of a professor, who assures them that their service will make a vital difference to the cause and bring them honor and glory. Once inside the military machine, however, they endure training that consists largely of attention to petty detail and abuse of authority before being fed into the hell of the war's infamous trench warfare--in which thousands die pointlessly as they take, lose, and re-take the same few yards of land over and over again.Remarque's style here is remarkable, for he keeps his prose simple and direct and easy to read without allowing it to become commonplace. Great horrors are presented casually, for they are the stuff of every day life; at the same time, the occasional moment of beauty--be it the blue sky on a clear day, the solace of friendship, or the satisfaction of enough to eat--stand out in high relief against the hell of battle. And as the novel progresses and the characters change, harden, and sometimes warp and break under the stress of battle, we find ourselves repeatedly confronted with both the nobility and tragedy of the ordinary man at war.ALL QUIET ON THE WESTERN FRONT still speaks in ringing tones, and it will not doubt continue to do so as long as war itself continues. Not just strongly recommended; it is required reading for all those who call themselves human.

A short account of the German soldiers version of the war

Published by Thriftbooks.com User , 23 years ago
Erich Maria Remarque`s book "All Quiet on the Western Front". Gives a very vivid account of the Great War through the eyes of the German soldier. I found the book very compatable to Robert Graves "Goodbye to all that". Remarque describes the school education in Germany at the time as Graves does the English. This gives a very good impression of what life was like at that time and what young men expected from the war and what was expected of them. The comradeship and loyalty men had to each other is well accounted for and Remarque said in a ZDF interview in the 60`s that many ex soldiers and relatives of soldiers wrote and thanked him for writing the book. He described for the veterans what they were unable to put into words themselves. To try and get some understanding of their trauma they gave the book to their loved ones. There are very few accounts of the Great War from the German side and "All Quiet on the Western Front" helps to fill a large gap in anyones knowledge of the conflict. Of course first and foremost it is an anti war book it shows the sensless loss and futillity of the war of attrition that was fought on both sides. The American film of the novel is more effective in the german sycronised version. This is not so much a war book as a book about humanity.