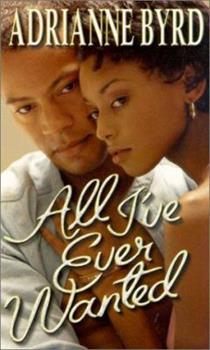 All I've Ever Wanted (Arabesque)

When single mum Kennedy St James stumbles across the brutal murder of an assistant DA, she is happy to escape with her life and leave the rest to the cops. But sexy homicide detective Maxwell Collier isn't about to let her out of his sight.

Published by Thriftbooks.com User , 11 years ago
From previous reviews, I'm seeing that this is a reprint of one of Ms. Byrd's earlier title. Reprint or not, I loved this book. The suspense was great. You really couldn't figure out who the bad guys were working for and once you did, it shocked your system. I found myself laughing, crying and screaming at the characters to get out of this place or that place. At one time my husband even asked me, "and you are talking to who"? This book is a must read. I ran into some characters from other books, which I read after this book was obviously printed. I'm so glad I read this and can't wait to purchase it for my Kindle. This book is definitely a keeper.

All I've Ever Wanted

Published by Thriftbooks.com User , 11 years ago
This book was amazing! The storyline was intense. The romance was off the chain and the drama was mind boggling. I could not put this book down until I finished because I had to know how this story was going to played out. Another great story from Adrianne!

Love will see you through

Published by Thriftbooks.com User , 19 years ago
"All I've Ever Wanted" was a good adventure/suspense book with a twist of romance. It was a fast paced action packed story. Kennedy St. James was a little naive to believe that she could just witness a murder, nearly get herself killed, then go home and forget everything that she just stumbled upon. She should have known better. The daughter of a policeman and going to college to get a degree even though she was pushing 30, Kennedy should have used better judgement and gone to the police instead of not doing anything. The night Kennedy stumbled upon the murder not only changed her life, but the life of Maxwell Collier, the homicide detective assigned the case. Kennedy's and Maxwell's paths cross and they are forever enjoined. Kennedy feels like she if does not say anything, but keep quiet, the murder investigation will eventually solve itself. Even when Maxwell is seeking clues that Kennedy could provide, she is determined to keep her mouth shut. However, when home is trashed and she feels the life of her 4 year son is threatened, Kennedy is determined to do whatever it takes to save her son and Maxwell is there to watch out for Kennedy.Maxwell knows Kennedy is somehow involved, but does not know to what extent. He trails her to try to uncover what she knows. Maxwell not only uncovers what Kennedy knows, but he uncovers that his interest in Kennedy is not only work related but of a personnel interest. Maxwell is determined to keep Kennedy safe whether she wants him involved in her life or not. "All I've Ever Wanted" involves love, commitment, trust, danger and intrigue. It is not only about Kennedy and Maxwell, but Maxwell's partner, Dossman, and Lt. Kelly Scardino are involved as a couple and can also say to each other that they are "All I've Ever Wanted."

Published by Thriftbooks.com User , 20 years ago
This book has it all. Love, suspense, and humor. I can't believe I read the book in a matter of hours. Bravo, Ms. Byrd you done good

Published by Thriftbooks.com User , 20 years ago
I have long been a fan of Ms. Byrd's work and ALL I'VE EVER WANTED is one of her best. The romance between Kennedy and Max was tender as well as funny. The characters are witty and the plot intriging. Be prepared to read this one in one sitting because this one is a real page turner.
Copyright © 2020 Thriftbooks.com Terms of Use | Privacy Policy | Do Not Sell My Personal Information | Accessibility Statement
ThriftBooks® and the ThriftBooks® logo are registered trademarks of Thrift Books Global, LLC