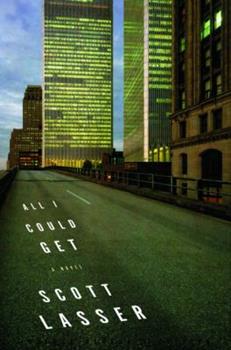 All I Could Get

Barry Schwartz has everything: two healthy young children, a strong marriage, a house in the Colorado mountains, and a job that lets him ski a hundred days in a good year. But at thirty, still paying off student loans and struggling to make the rent, he begins to think it isn't enough. All I Could Getis the story of the ultimately harrowing journey into the heart of New York's financial world that Barry and his family take on the way to discovering...

Published by Thriftbooks.com User , 16 years ago
A quick, tight read of what it's like, on a very personal level, to want to get ahead at the center of the high-pressure business world. Every step of the way I found myself drawn into the protaganist Barry's world, understanding why he made the decisions he did; I rooted for him even when the moral shortcomings of his decisions were clear. The evocation of the world of high finance was vivid, alluring and frightening at the same time. I felt this was how this world really worked. In the end a book that is both instructive and highly entertaining.

Published by Thriftbooks.com User , 19 years ago
I'm actually not a trader but I like good novels and this was one of the best of the year. It's not only an expose of the Wall Street world---these people who like you to think they're busy running the world yet can barely run a normal life. Lasser has written a great morality tale for the end of the last century and the begining of this new one. Smart, funny and dead on, it makes it hard to wait for the next book of this rising star.

Published by Thriftbooks.com User , 20 years ago
This book connected for me on many levels. First, it was a good read. I found myself picking it up for a few quick pages many times during the day--always a good gut check. Beyond that, it dealt with the core issues that I think so many of us wrestle with for most of our adult lives, ie, balancing our values with our needs, and resisting (or not) temptation. I could relate to the protagonist and found myself rooting for him even though I knew he was heading into the swamp at no one's fault but his own. The insights into Wall Street were a bonus, but in truth just a setting to play out the human elements. I felt that the writing was from the heart without pretension or cynicism like so many of the better known contemporary American novelists. I can't wait to read his other efforts.

Published by Thriftbooks.com User , 20 years ago
As a member of this wacky bond trading world, I really liked the book. One of the issues those not in the industry might grapple with is the reality of the characters. Surely there couldn't exist such crazy people, right? Wrong. Its spot on, which might be what offended those who didn't like the book. I found it well written, a great story line, and very entertaining. While some of the jargon is unfamiliar to the layman, Lasser does a great job of demythifying it. I tried to get through Bonfire of the Vanities and found it too cumbersome and fragmented. This book was a much easier read. And more true to life than you know.

Every man in Corporate America should read this book

Published by Thriftbooks.com User , 20 years ago
Im not sure what book the negatives read. Lasser's writing is a breath of fresh air from the overwritten mamoth novels of the "MS Word" era. I thought the cadence of his writing was engrossing. Descriptions were sharply written. The carpool dialogue was darkly hilarious.Like a modern "The Grapes of Wrath", this book will make you rethink the calculus of economic theory that business schools would have us all believe is the only way to guide our thinking."AICGet" is an easy read. Its message is powerful.
Trustpilot
Copyright © 2022 Thriftbooks.com Terms of Use | Privacy Policy | Do Not Sell or Share My Personal Information | Accessibility Statement
ThriftBooks® and the ThriftBooks® logo are registered trademarks of Thrift Books Global, LLC