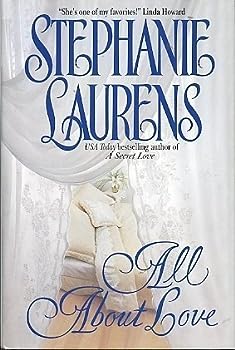 All About Love (Cynster Series)

(Book #6 in the Cynster Series)

This description may be from another edition of this product. Alasdair Cynster known to his intimates as Lucifer decides to rusticate in the country before the matchmaking skills of London's mamas become firmly focused on him, the last unwed Cynster. But an...

I LOVE this one

Published by Thriftbooks.com User , 19 years ago
I just don't get it why people don't like this installment (comparing to the preceding ones). I like it as much as I did the Devil's Bride and the Secret Love. Of all the heroines, Phyllida is my most favorite. She's kind of a 'brainy' type of girl and she does show how to use her head to the maximum in solving the mystery (well, comparing to Patience's character in Rake's Vow, I would say that Phyllida is more charming and up to the same league as Honoria and Alathea!!). As for Lucifer, he's as lovely as his other Cynster cousins. Therefore, no comment about his character.In my opinion, the mystery, although not that thrilling but does make sense to me, well, more than any other installments. I would say that it's as good as it is in Devil's Bride. I also love the way Lucifer and Phyllida develop their relationship and I really am impressed with the way Lucifer waits for Phyllida to learn to trust him (of course, before getting laid. It's just my conviction that people must learn to trust, love and then they go to bed, not the other way around :)) This is really my kind of romance. It's the closest to real life, the way they feel for each other. (FYI, I also love Julia Quinn's Romancing Mr. Bridgerton. So, if you like the book, you've got to read this one !!).It's definitely a keeper!!!

Charming story about learning to love.

Published by Thriftbooks.com User , 20 years ago
This is the first full-length novel by Stephanie Laurens that I've read, and it certainly won't be the last. "All About Love" is the story of "Lucifer" Cynster, a supposed rake who has retired to the country to visit an old friend. He is shocked to find that his friend has very recently been murdered when he arrives in the charming village of Colyton. He also immediately meets Phyllida, a beautiful young woman who is also the town busybody and clearly knows more that she's telling about the murder. Despite their mutual mistrust, the two are surprised by their attraction to one another and begin to work together to solve the murder. Before he met Phyllida, Lucifer had no intention of ever falling in love and marrying. Likewise, Phyllida was quite content with her life in the village and was certain that she will never marry. Most of the story is about how the two become comfortable with one another and the idea of falling in love and making a lifetime commitment.Despite a couple of nitpicks - I really hate it when heroines insist upon putting themselves in danger just to prove their "independence" and the suspects were all so similar that I had a hard time telling them apart - this was one of the best books I've read recently. Even though the plot was not terribly complicated or original (in my opinion, not really a flaw in a good romance), Laurens kept me interested all the way through. The growing relationship between the two leads was particularly well written and even surprisingly realistic. These two people didn't lay eyes on one another and immediately fall in love. They met, were attracted to one another, and let the attraction develop into something deeper. Laurens also writes great love scenes - hot but still sweet. This is the 6th novel in a series about the Bar Cynster, but don't worry if you haven't read the previous books. I haven't and it didn't make one bit of difference. You can bet I'll read the other 5 and when I'm done, I'll really enjoy picking this book back up and reading the epilogue where the whole family meets at a summer gathering.

Published by Thriftbooks.com User , 20 years ago
Another classic from Stephanie Laurens.. Last in the Bar Cynster series,meet Lucifer, sensual strong characters, lots of intimate moments with a good storyline, impossible to put down, impatient to get to the end, then so sad when there no more

The Last of the Bar Cynster Takes His Fall!

Published by Thriftbooks.com User , 20 years ago
All About Love is just that. This story answers the question that has been asked through the centuries - what is love? I'll let Lucifer give his opinion:"It took a while to work out, but there's only one explanation." His lips twisted wryly; he looked into Phyllida's eyes. "And I now know what Martha was trying to metaphysically jog my elbow about that first day." "What?" "You. Not just you but the possibility of what we could share. Martha was trying to tell me to open my eyes so I wouldn't miss it." He glanced around again; his arms tightened as he brought his gaze back to her face. "Horatio re-created Martha's garden because he realized, as I now do, that you can't turn aside from love. You can't choose to love - it doesn't work like that - but once you do love, you love forever. You can't move counties and leave it behind; it stays with you, in your heart, your mind - it becomes part of your soul. Horatio re-created the garden for the same reason Martha created it in the first place - as his expression of his love for her and recognition of her love for him. Martha was still with Horatio when he died - I know that as definitely as I stand here with you. They're still here, both of them, memories living within this garden. Their love, shared love, created it; while it lives, their love lives, too." His lips twisted again, this time in self-deprecation. "For all that we - the men in my family - try to avoid love, for the best and most logical of reasons, when it strikes, there's not one of us, not through all the generations, who has turned his back and walked away. For us, not walking away is harder, more frightening, than fighting any battle, but if there's one thing I've learned from my family, its that surrendering to love, to the demands of love, is the only road to real happiness." "While I've seen love in action in my family, I've learned a great deal from Horatio and Martha. Love simply is - it asks no permission. Acceptance is all that love asks, the only demand it makes, but it is an absolute one. You can either admit it to your heart, or refuse it, but there's no other option." Isn't that the most romantic passage you've ever read?!?Stephanie Laurens has the unique ability to create a series where each book is a masterpiece unto itself. No two stories are alike yet all share a common thread: Love, family, honor, adventure and protection. Stephanie has my sincerest gratitude for a series so wonderful it leaves me breathless! The epilogue was a beautiful tribute to the Bar Cynster and a wonderful closing to a story well done!Alasdair Reginald "Lucifer" Cynster is a hero in every sense of the word. His sensuality is only surpassed by his intelligence, and he needs every ounce of both to sway his ladylove - not to mention protect her from a killer and herself.Phyllida Tallent, beautiful in her own right is independent to a fault. As the caregiver of an entire village, she is not ready to relinquish control to an amazi

This romance series, especially this novel , is great

Published by Thriftbooks.com User , 20 years ago
Fleeing his brother's wedding before he becomes the next catch of the season, Alasdair "Lucifer" Cynster goes to the countryside to visit his friend, mentor, and fellow collector Horatio Walham. In Colyton Manor, Lucifer finds someone murdered Horatio. However, Phyllida Tallent accidentally knocks over a halberd, knocking out Lucifer. On her way to get help, she happens to notice a brown hat.Phyllida's dad, the magistrate concludes Lucifer is innocent of murder. Lucifer vows to uncover the killer's identity and Phyllida agrees to help him. As they investigate, several attempts to kill Phyllida occur. As Lucifer and Phyllida fall in love, they make love. He knows he made love with her because he will marry her, while she knows she made love because she loves him. However, a killer remains free with Phyllida being the prime target because she saw something at Horatio's house that identifies the murderer.New York Times best-selling author Stephanie Laurens has written an exciting historical romantic-mystery that freshens up her popular Cynster series. Lucifer and Phyllida are a wonderful couple who readers will adore and the tidbits that allow the audience to absorb the 1820 English countryside adds value to the tale. However, it is the amateur sleuthing of the lead couple that turns ALL ABOUT LOVE into a winning regency tale.Harriet Klausner
Copyright © 2020 Thriftbooks.com Terms of Use | Privacy Policy | Do Not Sell My Personal Information | Accessibility Statement
ThriftBooks® and the ThriftBooks® logo are registered trademarks of Thrift Books Global, LLC