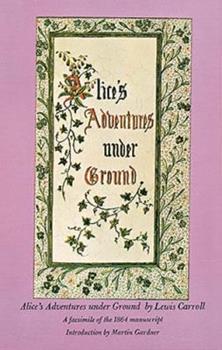 (Part of the Alice's Adventures in Wonderland Series)

Facsimile of ms.Carroll gave Alice Liddell in 1864. Different in many ways from final Alice. Hand lettering, illustrated by Carroll.

Published by Thriftbooks.com User , 18 years ago
The editor's discription of this product is all wrong. This is a play based of from Caroll's works.In this one-act fantasy play Alice's Adventure Under Ground by Christopher Hampton, has a style of surrealism playing with the imagination of a child. This play is based off and is adopted from the writings of Lewis Carroll. This leads it to have a logic all of its own, and presented towards the nonrealistic side of life. This takes place in a fireside room in Christ Church where Lewis Carroll sits in loneliness to his thoughts. He looks up to a mirror where he sees Alice inside of it for a second before she disappears and he sets up tea. A moment or so later there is a knock and Alice enters the room. He proceeds to tell her stories that draw her into some of tales of Wonderland and as this happens, he and three others become all of the characters Alice would encounter in that strange land of logic. There is no costume change, just physical performances transform them from classy 1860s people to the bizarre people of unique logic.Although the stories are presented from Alice's adventures of both books, the setting remains inside the room and it is though the imagination the transports us beyond the logic. The room seems be made up slightly abstractly, but it should have a sense that view comes from the eyes of a child. They would turn structure into a twisted surreal image of itself, trying to make it into a not unfriendly place of plain innocence.Lewis Carroll in this play has that same kind of purity we can see in several conversations with Alice. Like when Alice is trying to convince Carroll the she isn't someone named Mabel, because she knows more things than her. Carroll tests her out.Carroll: What's four times six?Alice: Thirteen.Carroll: Is London the capital of Paris?Alice: Yes.The logic from the books play nicely in all of the childlike scenes, always it creates wonder in common sense and tearing apart the ideas of what adults may think a proper. It reminds me of the purity of the movie Charlie and the Chocolate Factory where what may seem true to life is not a constant everywhere. Only through our imaginations, can we let ourselves free from structure and see things with new eyes. Everything real will be surreal and that will become the normal

The best edition of Alice

Published by Thriftbooks.com User , 21 years ago
This is my preferred copy of AAIW, and I have several. The quality of the illustrations is superior, because they were made from recently excavated printing blocks. The result is they reveal greater detail than I had seen before, leaving me more impressed than ever with John Tenniel's talent--as if Lewis Carroll's wasn't enough. A beautiful, beautiful book.

Published by Thriftbooks.com User , 21 years ago
As a person who likes to collect different illustrated versions of "Alice in Wonderland", this edition by Angel Dominguez (Artisan, 1996) is perhaps the best that I have encountered so far. There are many full page illustrations that are simply amazing to look at. With a detailed style that occasionally reminds me of Graeme Base, he populates "Wonderland" with all sorts of exotic birds and animals, some of which aren't usually included in illustrated versions of Alice, such as anteaters, platypuses, hippos, etc. But they lend an air of strangeness to this imaginary world that nonetheless seems to be appropriate. The artist has included a number of unique touches to the world of Alice, and they all fit in wonderfully with the spirit of the book. I would definitely say this book is worth buying for your "Alice" collection.

Published by Thriftbooks.com User , 21 years ago
Alice's Adventures were stories created on the spot and told by Charles Dodgson to his young female friends, including most particularly little Alice Liddell. After begging from Alice that these stories be written in a book, Charles Dodgson wrote a draft, and from this carefully handwrote and illustrated "Alice's Adventures Under Ground", which he gave to Alice Liddell. Later, Charles used his draft to rewrite the stories in a much expanded version which was published by Macmillan as "Alice's Adventures in Wonderland", and then went on to write "Through the Looking-Glass". "Alice's Adventures Under Ground" is a facsimile edition of the handwritten and hand illustrated manuscript, which now resides in the British Museum. There have been previous facsimile editions published, such as from Macmillan and Dover, but in black and white only. This color facsimile is extremely well done: the quality of the thick yellow paper is excellent, as is the brown printing. These, along with the color reproduction of the cover and attribution pages, combine to provide a great looking book that feels so wonderful to handle. And of course the story itself is marvelously enjoyable, and many of the same episodes which became Alice's Adventures in Wonderland can be seen in this precursor to that work.

It's so logical, it doesn't make sense!

Published by Thriftbooks.com User , 22 years ago
Most people think about "Alice in Wonderland" as being some little kid book about nonsense. Actually, Lewis Carroll was a very smart man. He invented Wonderland to show people truths in their own world most people wouldn't even bother thinking about. In fact, I think the whole point of the book is that even though Wonderland seems so unreal and full of nonsence, it's really just the same as our own world! I admit, I was curious about what a book so popular written for children would be like. It was great! I'd recomend it to anyone!

Alice's Adventures Under Ground Mentions in Our Blog