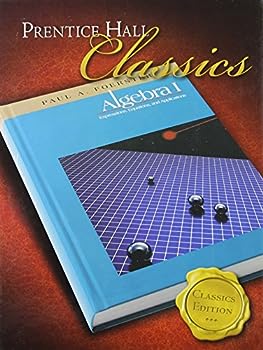 by Paul A. Foerster

This highly motivational text approaches the study of algebra with imaginative applications and clear problems derived from the real world. Technology tools are used to assist with time-comsuming calculations and to integrate graphing and problem-solving skills.

Provides a strong foundation in algebra.

Published by Thriftbooks.com User , 15 years ago
Foerster's text provides the student with a strong foundation in algebra. Topics are introduced incrementally. Before Foerster introduces a new idea, he first makes sure that the reader has a strong understanding of the concepts on which the new idea is based. His exposition, which can seem pedantic at times, is clear and effective. The numerous examples he provides are explained in painstaking detail. He also warns the reader of potential pitfalls. The exercises are designed to build both the reader's algebra skills and conceptual understanding. Each chapter concludes with a section in which the reader applies the material learned in the chapter to real world problems. This material, which is a particular strength of the text, demonstrates how and why algebra is used. The book begins with basic algebraic concepts that are sometimes covered in pre-algebra classes. Those concepts include operations on numbers, variables, constants, algebraic expressions and equations, signed numbers, and the rules of algebra such as the commutative, associative, and distributive laws. Foerster then discusses linear equations in one variable. Rather than discussing equations of lines next, as many authors do, he defers that topic in order to cover operations on polynomials. That allows him to discuss quadratic equations before the midterm review. While he later discusses how to factor by grouping, in this chapter he treats the factoring of quadratic polynomials as a series of special cases. The chapter concludes with a discussion of the quadratic formula, the derivation of which he leaves as an exercise. If this book has a weakness, it is that Foerster teaches you how to do algebra without always justifying the methods he uses. Following the midterm review, Foerster discusses equations of lines and systems of linear equations. This leads to a brief discussion of probability and statistics. Probability is revisited in the exercises later in the text. The following chapters address exponents, operations on polynomials, rational expressions and equations, radical expressions and equations, and inequalities. The last chapter, which is followed by a final review, introduces concepts such as functions and right triangle trigonometry that are explored in more advanced algebra classes. The final sections of this chapter, which address quadratic inequalities, provide a capstone to the text because they tie together many of the concepts introduced earlier. The exercises, which are numerous, vary from drills designed to develop the reader's facility with a particular type of algebraic manipulation to challenging application problems. For instance, Foerster poses the following problem: In some states, your state tax is based on your net income after your federal tax has been deducted and your federal tax is based on your net income after your state tax has been deducted. How do you determine how much tax you owe each entity if the tax you owe de

Published by Thriftbooks.com User , 16 years ago
I am a Math major and I have tutored Algebra for many years. This is the best text I have ever seen from a wide range of both public and private schools in my area. I am ordering a personal copy to have on my reference shelf. The text is extremely thorough and not at all watered down (as many of the texts I have recently seen). It covers each topic completely and in depth. An ample set of problems is given and the author builds the student up to the challenge of more difficult problems. Word problems are written with a sense of humor that even gets a chuckle from the eighth grade boys. This author strives to develop an Excellent student not just an adequete student. Highly recommended.

Published by Thriftbooks.com User , 18 years ago
Our school district has misguidedly adapted one of those fuzzy math curriculums, and I have chosen to teach my mathematically talented daughter at home rather than have her lose her love of math entirely. This book has made the job easier! Clear, elegant reasoning that doesn't skimp on rigor, plus problem solving with a humorous bent. It also covers all of the topics that I think "should" be covered. I am not finding the lack of a teacher's guide to be a problem, however, I do have a strong math background. I compared several math books before settling on this one. A close second, or maybe first, depending on your taste, is the Houghton Mifflin Algebra text. I have both, and sometimes it is enlightening to a non-teacher to see the different ways material can be presented.

This book is a great teacher!

Published by Thriftbooks.com User , 19 years ago
I searched long and hard for a text like this. It is well organized, well illustrated, and has plenty of example and practice problems with solutions to odd problems found in the back of the book. It is not like some of the newer algebra texts, which take an inductive approach and rely on "group discovery" of mathematical concepts. It delivers a thorough explanation of concepts in a logical and intuitive fashion, and proceeds at a deliberate pace that ensures a mastery of each concept before moving on to the next.As a home schooling resource:I use this for home schooling. It explains things so well that my 12 yr. old daughter is able to read a section and work the homework problems with little or no help from me. I supplement it with more drill and explanation found in the Key to Algebra workbooks from Key Press Curriculum. We proceed at a comfortable pace and have covered the first six chapters in one year. I plan to use Geometer's Sketchpad (also from Key Press Curriculum) as a supplemental graphing tool beginning in chapter seven.I don't mean to infer that home school parents with no knowledge of algebra can successfully use this book. It does not have a teacher's guide and one probably is not appropriate. As with any home school scenario, you will need to understand the topic yourself so that you can answer questions. I far prefer this text to Saxon and other texts designed for home school use.I spent over a year looking for a good algebra textbook and was surprised and disturbed to find that most are poor examples of how to explain a concept to a student. This book stands out as a wonderful exception. Compared to other algebra texts, it beats all I have found hands down. Here is the table of contents:1 Expressions and Equations2 Operations with Negative Numbers3 Distributing: Axioms and Other Properties4 Harder Equations5 Some Operations with Polynomials and Radicals6 Quadratic Equations7 Expressions and Equations Containing Two Variables8 Linear Function, Scattered Data, and Probability9 Properties of Exponents10 More Operations with Polynomials11 Rational Algebraic Expressions12 Radical Algebraic Expressions13 Inequalities14 Functions and Advanced Topics

A former student of Mr. Foerster's

Published by Thriftbooks.com User , 19 years ago
Until I met Mr. Foerster, I thought I desperately hated math. I scored well in it, yet I just hated the whole subject. Mr. Foerster is truly an inspiring man; the whole high school was in awe of him. His courses were reputed to be extremely tough. But the hallway gossip was soon dispelled. Although Algebra isn't always "easy", I was quite surprised and delighted to discover that Mr. Foerster's classes - and especially his textbooks - were extremely user-friendly! Mr. Foerster writes clearly, and is able to address Algebra from the beginning, rather than talking several levels over students' heads. His kindness, humor, and gentle personality show through in the books. Wow! Math is fun after all!I am now homeschooling my three kids, and Foerster's books are the texts of choice in this family.
Copyright © 2020 Thriftbooks.com Terms of Use | Privacy Policy | Do Not Sell My Personal Information | Accessibility Statement
ThriftBooks® and the ThriftBooks® logo are registered trademarks of Thrift Books Global, LLC