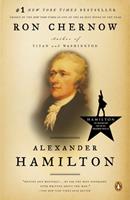 In depth study of one of the founders

Published by Austin , 1 year ago
Chernow is one of the top biographers going today. This book does not disappoint and Chernow leaves no stone unturned in trying to show us the man Alexander Hamilton was. You would be hard pressed to find a better biography of Hamilton.

Engrossing reading from the first page

Published by Thriftbooks.com User , 16 years ago
As an Irish reader who has always been interested in history, I have been interested in the American Civil War for a long time. Only recently has my interest in American history broadened to the revolutionary period. After reading this biography, I regret that I didn't acquire this interest much sooner. This book is engrossing from the first page. It is also an 'honest' biography. Although Chernow clearly believes in Hamilton's preeminent status among the founding fathers, he is not shy in criticising Hamilton's actions where it is merited. This book is pure joy from start to finish. Not only does Chernow give a superb overview of Hamilton's importance to the development of the United States but he also presents an excellent picture of the historical period. At the end of it one has new respect for a hugely important and controversial historical figure. What pleasure awaits those who have not yet read this book!

Published by Thriftbooks.com User , 18 years ago
If I were able to give this book greater than 5 stars, I would. Here is why:Chernow writes a complete biography, which while covering an immense amount of ground, still manages to be thoroughly interesting and provide numerous anecdotes and tidbits of information. Though we all know the result, Chernow's treatment of the duel with Aaron Burr offers readers many "can not put the book down" moments which would explain the dark circles under my eyes one morning at work. Still more amazing is Chernow's attention to the the (until now) little talked about reprocussions to the life of Aaron Burr (who was indicted for murder and on the lam while Vice President) and others around Hamilton including his seemingly amazing wife, Eliza.Besides being a supreme story on the life of the man who literally shaped this country's financial and trading system (despite strong opposition from Jefferson and his Federalist Paper co-hort Madison), Chernow reveals Hamilton's talents as an attorney and his explouts as a revolutionary war hero. What was also startling was how much Washington relied on Hamilton's talents and advice during the war and thereafter to the point where Washington began to view Hamilton as his equal. Further, Hamilton's push for the adoption of the US Constitution is clear despite opposition from many of those in this country including Jefferson himself who viewed this country as an agricultural society (which would have always doomed the US to always be Britain's dark sheep) and would have left the strongest powers with the states and not a central government.What was particularly amazing is how dirty and bruising politics was back in the late 18th and early 19th century. When reading about American History in school, the Founding Fathers always seemed like a fairly cohesive group which was above the rough and tumble of politics. To the extent that this exists in your head (as it did in mine), it is dispelled once and for all. Many of the attacks against Hamilton dealt with the fact that he was a "bastard" born in the West Indies. Some politicians also, without proof, sought to spread rumors that Hamilton was, in fact, part Creole.Chernow's book is expansive (going back in detail to Hamilton's childhood in the West Indies to the death of his wife Eliza on the eve of the Civil War who survived him by nearly 50 years), yet concise and does not dwell on any part of Hamilton's life for too long; giving sufficient detail without overwhelming the reader. To me, it reads much like a fictional novel though it is packed with facts, details and quotations. All of Chernow's assertions and facts are seemingly backed up with authority.Indeed, one would have a hard time conjuring up a life as interesting as Hamilton's. He was clearly one of the brightest stars this nation ever had and we are all lucky that he decided to call America his home and lucky to have this biography to illustrate it so well.P.S.: Anyone who thinks Hamilton whould be removed

The Most Important American Figure Never to Become President

Published by Thriftbooks.com User , 18 years ago
During the 1980s, during the period when Bank of New York launched its hostile take-over of Irving Bank, the following anecdote circulated.As Alexander Hamilton was getting into the boat to be rowed across the Hudson River to Weehawken where he was scheduled to duel Aaron Burr, he turned to his aide and said, "Don't do anything until I return."The story concluded, unfortunately, the aide and all of his successors took Hamilton at his word.The anecdote, though funny at the time of the take-over, could not have a weaker historical foundation. Ron Chernow's biography relates the details of an illegitimate, largely self-taught orphan who rose to become George Washington's key aide-de-camp, battlefield hero, Constitutional Convention delegate, co-author of The Federalist Papers, Federalist Party head and the country's first Treasury Secretary.Hamilton was a rare revolutionary: fearless warrior, master administrator and blazing administrator. No other moment in American history could have better employed Hamilton's abundant talents and energy.As Treasury Secretary, the country benefited from his abilities as a thinker, doer, skilled executive and political theorist. He was a system builder who devised and implemented interrelated policies.As in the Revolution, Hamilton and Washington complemented each other. Washington wanted to remain above the partisan fray. He was gifted with superb judgment. When presented with options, he almost always made the correct choice. His detached style left room for assertiveness. Especially in financial matters, Hamilton stepped into the breach. Washington was sensitive to criticism, yet learned to control his emotions. Hamilton, on the other hand, was often acted without tact and was naturally provocative.Perhaps the main reason Hamilton accomplished so much was Washington agreed with his vision of 13 colonies welded into a single, respected nation. Chernow presents a well-written and nuanced portrait that arguably is the most important figure in American history that never attained the presidency. Though his foreign birth denied him the ultimate prize, his accomplishments produced a far more lasting impact than many who claimed it.
Trustpilot
Copyright © 2022 Thriftbooks.com Terms of Use | Privacy Policy | Do Not Sell or Share My Personal Information | Accessibility Statement
ThriftBooks® and the ThriftBooks® logo are registered trademarks of Thrift Books Global, LLC