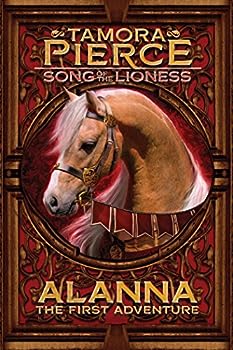 Alanna: The First Adventure (The Song of the Lioness, Book 1)

This description may be from another edition of this product. From Tamora Pierce, the first book in the Song of the Lioness Quartet, honored with the Margaret A. Edwards Award. "From now on I'm Alan of Trebond, the younger twin. I'll be a knight." In a time when...

I keep forgetting how short this is

Published by Thriftbooks.com User , 2 years ago
Since I picked this book up at age 12 I've loved it. There's something spellbinding about Tamora Pierce's writing that leaves you wanting more. I grew up with Alanna and I'm so pleased I get to relive those memories and share them with a new generation of readers. It really is as good as I remember.

Published by Thriftbooks.com User , 4 years ago
this entire series is one of the best things you can read. alanna is one of the most downs to earth yet frustrating characters you'll ever come across. within the first twenty pages you'll be the most indulged you've ever been! so recommend it and it is one of the best series I've read!!

An excellent start to a wonderful universe

Published by Thriftbooks.com User , 5 years ago
Alanna is the kind of character every misfit girl wants to have around growing up. She's got all the same problems - homework, boys, parents, body image concerns - but has the strength and humor to conquer all of it. Not to mention an amazing universe that keeps going long after her story closes!

The best of all worlds.

Published by Thriftbooks.com User , 16 years ago
I must have read these four novels by Tamora Pierce at least eight times. I loved them growing up and I love them still, although I am not nearly so pleased with her more recent work. I'm glad that she is successful but the quality seems to have sharply fallen off. Anyway, this series is about a ten yr old girl named Alanna and her twin brother Thom who are being sent away to be educated. Thom is meant to become a knight and Alanna to go to a convent school. Neither twin is happy with the situation so they forge new letters of introduction from their father and Thom goes off to the convent/monastery to learn to become a Mage and Alanna is disguised as "Alan" and goes to the castle to become a knight. The books follow her adventures while at school then after she is ordained and they are so engaging and wonderful with many memorable characters not to mention a strong female role model. I reccommend this series to anyone, but most especially anyone with a ten yr old daughter who might fall in love with these books the way I did.

Published by Thriftbooks.com User , 20 years ago
This was SUCH a good book! Alanna has to go to a convent to learn "how to be a lady" and her twin brother has to go learn how to be a knight...but both of them want to go to the place where the other is going. So they switch places. Well, her brother doesn't have to go learn to be a lady...when boys go to the convent they learn to be sorcerers. Alanna loves hunting and doing things like that, and her brother loves sorcery, while socery scares Alanna and her brother hates hunting and that sort of thing. Alanna disguises herself as a boy and says she is Alan. She meets many friends, such as Prince Jonathon, the son of a noble king, and George, the King of Theives. She also meets a few enemies...such as Rolan, a bully at the palace, and Duke Roger, a mysterious uncle of Jonathon who Alan(na) insists is evil. This wonderful and action-packed book will have you laughing, shivering, crying, and rejoicing. It's a must-read for fans of Harry Potter (by J.K. Rowling), Everworld (by K.A. Applegate), Protector of the Small (by Tamora Pierce), and the Immortals (also by Tamora Pierce).

This introduced me to fantasy books

Published by Thriftbooks.com User , 21 years ago
My favorite type of books is fantasy all because of this book. Three years ago, when I was in sixth grade, a friend saw me reading "The Woman who Rides Like a Man" over his shoulder (that's the third book in this series), and the next day he brought this book in to school and told me to read it in study hall. I loved it, and borrowed it and took it home where I finished it that night. I then went out and bought the rest of the series. The book is great, with a little resemblence to "Twelfth Night" (no, if you haven't heard of it, it's not a fantasy book. It's a play by Shakespeare. Sorry.) Alanna and her brother switch places, forcing her to disguise herself as a boy (luckily, her brother, Thom, does not have to disguise himself as a girl.) During the beginning of the book, Alanna tries to reject her powerful magical ability. However, she is forced to use it twice, and realizes that her "Gift" is a blessing from the gods, not a curse from them. Meanwhile, Alanna has to train as a knight. She is shorter than the other boys, and has more trouble, at first. But she works hard to overcome her height disadvantage (not by using magic to make herself grow; she tried that once and got a bad headache), and, while beating all the other boys at knighthood, Alanna still has to deal with issues of womanhood. And what will happen when she becomes a knight? She can't be a "boy" forever!

This is an excellent book!

Published by Thriftbooks.com User , 21 years ago
I was first introduced to this book in third grade by someone who was babysitting me. By fourth grade I had read the whole series a number of times. I don't know if I would say this one or the last one was my favorite, but both were great. You can imagine the characters are real, and the same goes to the world they live in. I still love these books, but now I'm in eighth grade. I see all these adults who have read these books, and I think it is great! I can read these over and over and over and not get bored, even though I know exactly what is going to happen and when. I doubt they will ever get boring, thank God. I'll always have a good book to read! I recommend reading the whole series, along with the Wild Magic series, after you read this book, to find out all that happens to Alanna. I havn't read her new series yet, I think I'll wait for it to come out in paper back. I don't know if I'm ready to read something by her that isn't somehow related to the magical world of Tortall and Alanna! Well anyway, this is an excellent book, and I would recommend it to anyone who likes reading even a little bit, and especially to girls. I don't think this is really a guy book...

Published by Thriftbooks.com User , 21 years ago
She's brave, she wants to be a knight and she has very strong powers with the Gift. Who is she? Alanna! Alanna must use her skills and test her bravery to save her Prince and and earn her shield. Whether she's fighting a fellow page or ancient monsters, Alanna's got what it takes! I loved this book, and I recommend it to everyone. If you like this book, be sure to read 'In the Hand of the Goddess', the second book in the 'Song of the Lioness' Quartet.I love all of Ms. Pierce's books especially 'In the Hand of the Goddess' and In the Relms of the Gods' (The 4th book in the Immortals Quartet)Please read all of them!
Copyright © 2020 Thriftbooks.com Terms of Use | Privacy Policy | Do Not Sell My Personal Information | Accessibility Statement
ThriftBooks® and the ThriftBooks® logo are registered trademarks of Thrift Books Global, LLC