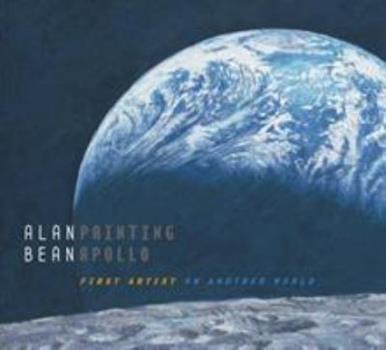 Alan Bean, Painting Apollo: First Artist on Another World captures humankind's adventure in space through the eyes and emotions of the only artist who has ever been there. Through a brilliant display of color and craftsmanship, Alan Bean shares his unique perspective, conveying what only eleven other humans have experienced, in a way that only he can. As Alan Bean writes, "The art I make now is the beginning of a new category in the progression of...

My Book on an Island

Published by Thriftbooks.com User , 12 years ago
Alan Bean amazes me every time he releases a new painting. I check back to his website often and try to keep up and dream of which order I would buy them in if I were to win a great lottery! Anyone who buys this book has done just that, won a great lottery. Captain Bean is the fourth of twelve moonwalkers and one of the youngest and hitting 80 soon. That said to state the obvious, "read about an American history while he's a living hero that you can go to an art gallery and see!" But the book! Oh my, if given a choice of books to take along with me when I'm to be left alone on an island I want this one! Each day I'll look at a new picture and find new intricacies,touches and dynamics. Then the next year I won't go chronological I'll try to decide how the trip took place for the crew not the order in which they were painted. Year after year would pass and yet I'd leave that island with the grandest love and respect for Alan Bean's knowledge and paintings but because I still wouldn't be finished enjoying, devouring, appreciating and continuing to pretend I was there with him as he saw each "picture" in his mind or tells me the joke as to how his whole crew is on the moon at the same time! I wouldn't leave the book behind once rescued, I'd take it back with me, holding it carefully, large palm moonwalkerleaves carefully folded around it to protect the binding so as not to loose a page or a moment in Mr. Bean's history! It's a book that will entertain and inspire me for as long as the pages will hold the gorgeous art.

Published by Thriftbooks.com User , 13 years ago
I am a lifetime space enthusiast, and this book is a great addition to my collection. Amazing combination of style, skill, moon artifacts, and actual events or ideas. Each painting has it's own story. I give only four stars because the description of each painting is at the back of the book instead of by each picture - annoying to flip back and forth. David

A unique collection of art

Published by Thriftbooks.com User , 13 years ago
Alan Bean's reason for producing this book was simple: while artists have enthralled us by reproducing natural beauty and historical scenes, no artists ever traveled to the moon. Until Alan Bean himself did on Apollo 12. Bean uses the paintbrush to evoke what it felt like to visit and travel the moon. Many of the paintings evoke a sort of New Frontier nationalism, with astronauts as the iconic cowboys of a Remington painting. One really interesting painting technique he uses is to incorporate parts of the Apollo mission into his actual painting style. For example, to provide texture, sometimes he will paint on a space suit bootprint or a piece of a spacecraft. The paintings themselves look like they have small craters. This creates a visually original effect - one that probably inspired directly by Bean's time exploring the moon.

Man on the Moon

Published by Thriftbooks.com User , 13 years ago
I am an artist and I can say as fellow artists know - observation and experience add so much to the artwork one creates.... To view a persons work that has been on the Moon and an artist is such an inspiration for me as my passion for astronomy is equal that of art. This is a wonderful book of observations, feelings and a product of one very talented, fortunate man - and Astronaut and Artist - WOW !!! how unique!!!

Published by Thriftbooks.com User , 13 years ago
..Van Gogh 'Starry Night' 1889 ..Klee 'Moonrise' 1915 ..Ernst 'Petrified City' 1935 ..Pollack 'Moon Woman' 1942 .. Chagal 'Blue Circus' 1950 Many an artist has been inspired by the moon hanging silently overhead. But one artist has a unique perspective on this eternal muse. Alan Bean has walked on it's ghostly landscape. Felt it's pull below his feet. Closed his eyes and felt it's sweet caress. Looked up to see the Earth hanging silently 230,000 miles overhead. Al Bean was different from most of the other astronauts. They lived for speed and adventure. They liked to hunt or fine tune their sports cars. Bean liked to paint. Never mind that Florida Gold corvette he had. A happy joking gentleman renowned for toasting the Apollo 12 camera. He accidentally pointed it directly at the sun. The camera's delicate receptor tube fried instantly. Ruining it for the rest of us stuck down here. Then later he spent some 54 days up in skylab. But he really wanted to paint. So paint he did. Realistic and imaginary scenes from various moon missions. Mostly his own (Apollo 12): 'Helping Hands'. He and Conrad dismantle some core tube. 'Home Sweet Home' a sweeping moonscape of the Ocean of Storms with moonlander. A moon self portrait showing himself loping across a crater. 'Houston, We Have a Problem' debris streaming away from the blast. A beautiful 'In Flight' showing Shepard driving a golf ball on the moon. I don't think it went quite that high. But a wonderful moon scape with lander, flag, and craters galore. And indeed Bean proves to be quite an accomplished artist. His works posses a great feel about them. Good technique, good light adaption. Great color balance (well only he would know that for sure!). Bean has added an angle to most of his paintings. He has ground up some space suit material and has incorporated it into the paint. The premise being that there is moon dust in the suit and therefore in the painting. He has been known to use a moon pick as one would use a palette knife. And he even imprints his moon boot sole onto the canvas primer. His art does have alot of texture What can you say. If Pollack could leave his cigarette butts. Then why not moondust.
Trustpilot
Copyright © 2022 Thriftbooks.com Terms of Use | Privacy Policy | Do Not Sell or Share My Personal Information | Accessibility Statement
ThriftBooks® and the ThriftBooks® logo are registered trademarks of Thrift Books Global, LLC