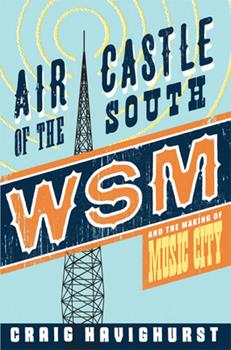 Air Castle of the South: WSM and the Making of Music City

Published by Thriftbooks.com User , 12 years ago
The Legend, WSM AM 650 is without doubt the greatest radio station that ever existed anywhere. Heard in some 38 states in the evening, WSM has brought millions of hours of listening pleasure to millions of people since 1925. No other radio station even comes close to the programming and content of this great radio station. This book chronicles The Legend from it's infancy to it's prowness in today's radio world. Great reading and information for a true American icon and institution.

Published by Thriftbooks.com User , 13 years ago
This book is a fascinating, engaging read. It feels more like a great story than a history book, but is a really interesting insight into the beginnings of WSM, the early history of radio, country music, the Opry, the start of many a famous name in broadcasting, and Nashville itself. Thoroughly enjoyable, I would recommend this to every reader I know.

Published by Thriftbooks.com User , 13 years ago
Havighurst has compiled a tremendous amount of information on this subject into a story which comes to life. I can't imagine any one writing a more definitive work on WSM and that era. He has succeeded, for this reader, into making WSM a living, breathing character unto itself within this story. I'm not even a huge country music fan but no matter, Havighurst's storytelling style and obvious passion for telling this story won me over early on. Once I picked it up I couldn't put it down. He made me feel as if I was right there in the early days of radio, watching and listening as all the early pioneers of the industry shaped the airwaves. Great read for anyone interested in how radio began and evolved and it's impact on not only country music but the world as well.

Published by Thriftbooks.com User , 13 years ago
I believe Air Castle of the South is an important book, in that it goes far beyond the history of a musical genre. It sheds light on the mindset of those who first dabbled in a revolutionary new medium. The innocence, curiosity, and zeal of some of radio's brilliantly naive pioneers is painstakingly recorded, as is their evolution from enthusiastic hobbyists to full time broadcasters. But this accessible read is not just a nostalgic indulgence. It's full of insights for the era-changing times we are in now, where the Internet is opening new doors of opportunity for those willing to rethink the why, the what, and the how. As a performing artist who came up through the ranks playing on country music radio shows, including the Opry, Air Castle rekindled my affection for the charm and simplicity of those shows. As someone who grew up listening to a transistor radio in bed late at night with an earphone, it renewed my love of the medium of sound; where the absence of force-fed visual images allows one's imagination to create them in the theater of the mind. Thank you, Craig Havighurst, for this invaluable work. It is clearly a labor of love.

Published by Thriftbooks.com User , 14 years ago
Just finished Craig Havighurst's magnificent history of WSM. It's a read that you hate to see come to an end. What a GREAT station WSM was in its golden age which extended into the TV era while other stations of its size threw in the towel and got rid of its live musicians and the stuff that made bigtime radio great. The book comes to a sad ending--the rash sacking of TNN and Opryland--and I kinda felt like I was finishing the final pages of "Gone With the Wind." Anybody with an interest in Bluegrass, Country, Nashville, big time radio, the Ryman and/or the roots of country music and broadcasting has to read this book.
Copyright © 2020 Thriftbooks.com Terms of Use | Privacy Policy | Do Not Sell My Personal Information | Accessibility Statement
ThriftBooks® and the ThriftBooks® logo are registered trademarks of Thrift Books Global, LLC