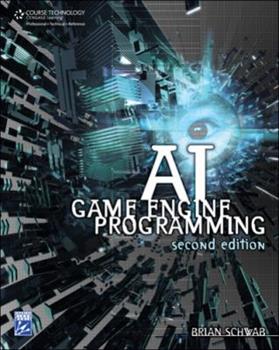 A fully revised update to the first edition, "AI Game Engine Programming, Second Edition" provides game developers with the tools and information they need to create modern game AI engines. Covering the four principle elements of game artificial intelligence, the book takes you from theory to actual game development, going beyond merely discussing how a technique might be used. Beginning with a clear definition of game AI, you'll learn common terminology,...

Published by Thriftbooks.com User , 12 years ago
This is a good book if you are a relatively experienced programmer who is beginning game programming (like me) or if you are already somewhat experienced in basic game development and simply want to improve your AI knowledge. The book covers loads of different AI patterns for all sorts of different situations. Some of these I was familiar with such as Finite State Machines but there were plenty of others that I hadn't taken a look at before but which am now using a lot (thanks to this book) such as Fuzzy State Machines. I didn't really have any trouble with the graphics code being written in OpenGL which is my library of choice since I do a lot of work on non-Microsoft systems. If you are also in the process of learning OpenGL, for example because you want to write games software for mobile platforms such as the iPhone/iPod or Android, this is actually a nice bonus. Mind you the Apple products at least use OpenGL ES which differs slightly from OpenGL but this doesn't detract from the value of the sample OpenGL code provided here. I like the way the author demonstrates his teachings with quite comprehensive example projects unlike some other programming books I have read where the authors provided a lot less code. In the end there are few things that you learn from as well as reading raw sources. Quite a lot of the source code is written in C++ but then again I didn't buy the book for C++ lessons, I bought it for the design patterns it covers and these are easily implemented in other languages. The one criticism I have of this book is that after only a few months of use the binding is already splitting.

All around great book on the subject

Published by Thriftbooks.com User , 16 years ago
This book was quite revealing to me. It is basically split into two halves: the first part talks about specific game types and how developers have traditionally used AI systems for each, and the second part which covers the actual code implementations for these systems. I loved the in depth game section. It was really interesting to find out exactly which techniques are used the the various games. He even includes many examples from real life games. It made thinking about creating these systems for myself seem much more doable. As far as code goes, there's a ton of it. Both working game code for each type of AI system he's trying to explain, as well as code from real games or internet demos. I found his code clean and professionally written. I have already used code from three different chapters as a launching point for my own projects. I saw a reference in another review for Programming AI by Example. I also own that book and I must say I liked this one better. Matt's book is good, don't get me wrong. But there's a whole chapter on math basics (which I didn't need), another chapter on steering behaviors (all of the information and code for which I can get directly from Craig Reynold's OpenSteer project online) and then specific chapters detailing Matt's own AI engine, which is called Raven (nothing really mind blowing, and I'd rather code my own to get the concepts solid). Brian's book, on the other hand, was more of a toolbox of code that I can assemble into whatever shapes I need. Not too much code, and definately not too little. One of the reviewers noted that there's "not enough code to illustrate the concepts"? Sounds to me like somebody just wants the entire thing done for him. I looked at the other books that guy has reviewed, and he absolutely loved Andre LaMothe's "Tricks of the Windows Game Programming Gurus". Ha. That book is for total beginners, and was just a collection and republishing of some of his earlier, outdated books. He even says "I want to write like him". I'm really looking forward to anything else Brian might write in the future. I have found so many useful nuggets of information from this book. Great job.

Published by Thriftbooks.com User , 16 years ago
This is a good book that talks about game AI. The author describe most of the game AI topics in this book. If you interest in game AI. I highly suggest you to have this book on your bookself.

Published by Thriftbooks.com User , 16 years ago
I have worked in the game industry for over 10 years, and have also taught classes in game design and programming. This is the first book that I would recommend as intro/intermediate textbook for game AI. It covers all the popular game types (shooters, fighters, sports, and more) and covers all the popular AI methods (state machines, scripting, messaging, many others). The book uses a very clean, not-too formal, not-too conversational writing style, which is easy to get into and yet remains professional sounding. The included code is clean, usable, and is very representative of real working game code. There's also tons of code snippets from actual released games to show the reader how the concepts have been done out in the wild. The book also goes into the actual process of creating an AI system for a game project. Only by knowing the type of game you're going to make, the platform, the audience, and a slurry of other factors can you intelligently design a system that will provide your project with everything it needs to succeed. All in all, a great piece of work from an industry vet. Also, another review states that "the book fails because it's OpenGL based," which is hilarious in its ignorance and outright falsehood. The reviewer states that "all major gaming houses use DirectX" which is strange, cosidering that the vast majority of all video games are actually not PC based (which is the platform that mostly uses DirectX; Sony and Nintendo obviously are not using Microsoft's libraries, even the XBox uses a very specialized version of DirectX). Plus the fact that the author actually WORKS at Sony, and you can see that the reviewer doesn't really have any clue. The book is about Game AI, and the small bit of OpenGL code in the book is just allowing a quick, cross platform "renderer" for the AI demos. This is not a book on game graphics, and never says that it is.

Published by Thriftbooks.com User , 16 years ago
I really dug this book. It was interesting from many different angles. The breakdown of the various game types into what kinds of AI was most useful was cool, I'd never seen that in an AI book before. In addition to all the working code, the book also had quite a few "samples" of code from real games, so that you could see some of the techniques in use. I really liked the section at the end of each coding chapter where the book talks about "Extensions" meaning ways to take each AI method a step or two further. I also liked the chapter on how to break down a game into a bunch of AI pieces, separating the AI into workable chunks. Some of the figures were a little janky, but they did get the idea across. Definately doesn't detract from the book, it just seemed like some of the figures were much better then others. I've been using the little test app included with the book (it's a small openGL version of asteroids) to play with some ideas of my own. Everything's worked very nice so far. All in all, very good book. Lots of usable code and plenty of real game AI information.
Copyright © 2022 Thriftbooks.com Terms of Use | Privacy Policy | Do Not Sell My Personal Information | Accessibility Statement
ThriftBooks® and the ThriftBooks® logo are registered trademarks of Thrift Books Global, LLC