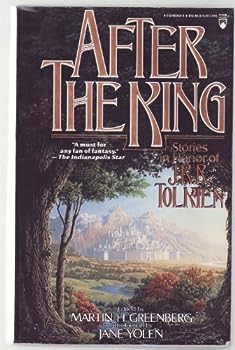 After the King: Stories in Honour of J.R.R. Tolkien

After the King presents an outstanding collection of new fantasy stories by an extraordinary assemblage of some of the very best writers to ever continue the tradition Tolkien began with The Lord of... This description may be from another edition of this product.

"A sense of mystery"

Published by Thriftbooks.com User , 12 years ago
(This is kinda long... the short and sweet is I really enjoyed this book) After seeing the run of negative reviews I decided to revisit 'After the King' and see if it had lost any of the charm it had the first time through... nope, it still has it. Yes it is true that some of these stories are not tales Tolkien himself would have written, yes some of them can seem out of place amidst the rest, and no they do not take place in Middle Earth, but they all are sweetly faerie and therefore I believe quite Tolkienesque. Please bear with me as I try to explain. Tolkien was very much the grave and nostalgic author we see in the LotR but he was a lot more too. We know he was light-hearted in the 'Hobbit', but he was also silly and charming in 'Roverandom', and silly and irreverent in 'Farmer Gilies of Ham'. In 'The Smith of Wootton Major' he delighted to show us brief glimpses of a magical land while in the 'Silmarilion' he methodically, but no less wonderfully, presented the whole beautiful and tragic thing. But I think he was most like the painter in 'Leaf by Niggle' who came to find joy in his work yet at the end still yearned for more. All of the stories in 'After the King' share some of those qualities, albeit some more than others. There are goofy tales and grave ones. Some are light-hearted and some bittersweet. Here's just a few examples: there is the hope-against-all-hope redemptive story of 'Faith', the tongue-in-cheek 'Troll Bridge' reminiscent of Tolkien's own nostalgia for bygone days, and 'Death and the Lady' which exudes that same sense of quiet determination in the presence of great loss that characterized Tolkien's epics. But when it comes to being "after the king" I think 'Gotterdammerung' speaks best for the entire collection when it opens with the following line "We are talking essentially about the need to preserve a sense of magic, of mystery." That is what Tolkien desired(don't take my word for it, read his essay 'On Fairy Stories' and see for yourself). That is what he did best. Never being too fatalistic or disingenuous, he made his worlds a little mysterious. He made them wonderful. These tales in 'After the King' have a bit of that magic in them and the best part of all is that you don't need to be some sort of LotR buff to appreciate it. If this rambling attempt to compare a few short stories to Tolkien's body of work leaves you a bit sceptical (and my apologies for being so long winded, I felt compelled to speak out) let me encourage you to read this book if for nothing more than the introduction, or addition, to some very good authors. I had not read any of these authors beforehand (I was mostly spending my "fantasy time" rereading LotR) but after finishing many more books by McKillip, 'Fellowship of the Dragon' is still one my favorites. 'Reeve the Just' me led me directly to some of Donaldson's other works, and a friends comparison between the brave apprentice in 'Up the Side of the Air' and the proud

Stories In Honor of Tolkien

Published by Thriftbooks.com User , 15 years ago
This was an excellent book. The variety of the stories and their settings and themes was refreshing. After reading many classic fairy tales, fantasy and science fiction stories, it was nice to read something new. Some draw you into the past, some are set in the present, while others take you to an unknown time. The characters are not your typical damsel in distress, but people (and creatures) that you can understand and maybe even relate to. One of my favorites is "The Conjure Man" by Charles de Lint. This story talks about a problem that is very close to my heart. I would recommend this book to anyone that has enjoyed fantasy, and especially Tolkien lovers.

Published by Thriftbooks.com User , 20 years ago
As other reviewers have said, these stories are not Tolkein-esque. They are, however, a fine example of Tolkien's LEGACY. DeLint and Bull write stories with a subtly of prose which gives me shivers. I have read these storiezs aloud to friends over the phone. If you are a fan of fantasy, then read this collection. It is the book I take when I don't want to pack a lot of books but still want a diverse read on trips. Thank you, Tolkein (and MAcDonald) for making modern fantasy possible.

A glorious way to spend hours in another world

Published by Thriftbooks.com User , 24 years ago
I am more familiar with J.R.R. Tolkien's works than I am with the works of the authors featured in this mesmerizing collection of stories. However, through their rich dialogue and descriptions, many of the authors have created a new fan. It was refreshing to see humor in this often dark genre. Mike Resnik's "Revolt of the Sugar Plum Fairies" had me laughing out loud on the subway, as did Terry Pratchett's "Troll Bridge." One of Tolkien's strengths was his ability to transport you to places that, though sometimes frightening, invited your return. These vivid stories do the same, even Dennis McKiernan's jarring "The Halfling House" is told with enough lightly sprinkled wit and detail that the ending is one of the best parts of the story. Well done, group.
Copyright © 2022 Thriftbooks.com Terms of Use | Privacy Policy | Do Not Sell My Personal Information | Accessibility Statement
ThriftBooks® and the ThriftBooks® logo are registered trademarks of Thrift Books Global, LLC