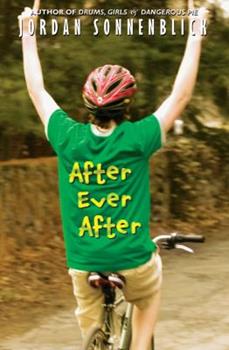 Jeffrey isn't a little boy with cancer anymore. He's a teen in remission. Even though the cancer should be far behind him, life still feelsfragile. The aftereffects of treatment have left Jeffrey with an inability to be a great student or to walk without limping. His parents stillworry about him. His older brother, Steven, who has always been Jeffrey's main support system and confidant, lost it and took off toAfrica to be in a drumming circle and...

Published by Thriftbooks.com User , 12 years ago
This book is a sequel to Drums, Girls & Dangerous Pie where eighth grade Steven tells his story of trying to be a normal teen while dealing with the fact that his four year-old brother Jeffery has leukemia. After Every After is in turn narrated by Jeffrey who is now a teen himself and dealing with learning disabilities caused by all the different medications he had to take as a child in order to save his life. He is also trying to escape his identity as "the kid who had cancer" as well as adjusting to the fact that his reliable and every-steady brother Steven has taken off to Africa to "find himself." Jeffery's best friend Tad is also a fellow cancer survivor who still has to use a wheelchair. When Jeffery finds out he has to pass a state mandated math class in order to move on to high school he is terrified that his learning disabilities will keep in stranded in middle school forever. He turns to Tad for help and together they make a pact...Tad will tutor Jeffery in math and Jeffery, who is an avid bike rider, will get Tad in shape enough to walk across the stage at their eighth grade graduation. Through out all of this Jeffery is also falling for the very cute new girl who seems to like him though he can't figure out why. His one wish is that he could talk to Steven so he can figure out how to navigate through his perilous journey of love and middle school (not to mention overbearing parents.) But Steven has cut himself off, no email, no phone, no nothing! I loved this heartwarming, well written read! I laughed, I cried and I smiled a lot. There are a lot of great characters to love including a hilariously described gym teacher who has the best of intentions but, well...think of your gym teacher :) Lots of humor and sarcasm balanced with the emotional cost of dealing with cancer and people who you think have let you down. A marvelous, must-have addition to any middle and high school library! Boys and girls alike will enjoy this one. Junior Library Guild Advanced Readers (6th-9th) pick for April 2010

Published by Thriftbooks.com User , 12 years ago
After Ever After is an awesome novel. It is the sequel to the novel Drums, Girls, and Dangerous Pie and it picks up the novel as Jeffy starts 8th grade. This novel left me in tears at the end because it was so moving! Anyone who wants a good read should read this novel or Drums, Girls, and Dangerous Pie!! <3

Published by Thriftbooks.com User , 12 years ago
At the age of five, Jeffrey was diagnosed with leukemia - lymphocytic lymphoma, to be specific. He was a lucky little boy: His parents and 13-year-old brother, Steven, were there for him every step of the way, and the community rallied around him. He was a lucky little boy: He survived. Years later, Jeffrey's in remission, but reminded of his illness every day, thanks to the limp and other irrevocable marks left on his body and his mind by the cancer. Radiation and chemotherapy left him "a little scrambled up," making him "spacey" on occasion. Now in eighth grade, he instantly bonds with a new classmate, a girl who just moved to New Jersey from California. The second Jeffrey meets Lindsey, he knows she's his dream girl. Dealing with middle school (and trying to impress female classmates) is hard enough without having physical impairments, but Jeffrey has an unsinkable spirit. His best friend, Tad, also a cancer survivor, is less upbeat about his condition. The two boys have leaned on each other both in and outside of school since the fourth grade. Now, their last year in middle school will test their strength - physical strength, mental strength, and strength of character - over and over again. After Ever After will make readers laugh and cry and feel. It will be a delight to fans of Drums, Girls & Dangerous Pie, the book that introduced us to the Alper family, a book that I read, loved, and hand-sold like crazy the year of its release, and have continued to recommend ever since. After Ever After is a solid stand-alone story, so those who came upon After without having read Drums, Girls & Dangerous Pie won't be lost, but they would be wise to read the equally-fabulous Drums to see how the story began. Instead of picking up the story right where Pie left off, Sonnenblick opted to fast-forward After Ever After to Jeffrey's eighth grade year and make him the first-person narrator instead of Steven, who was the protagonist of the previous story. Readers catch up with Jeffrey quickly, learning not only of his medical history and current health status but also of his elementary and middle school experiences. Likewise, we are informed of Steven's whereabouts - something I won't give away here, something that was another bold choice on Sonnenblick's part which ensured that this story was now solidly Jeffrey's - and what a great story it is. "I can't walk too well, but when I'm on my bike, I can fly." Go, Jeffrey, go.

Published by Thriftbooks.com User , 12 years ago
After Ever After is the perfect follow up to Drums Girls and Dangerous Pie. Jeffery is now in 8th grade and is dealing with the after effects of having cancer. He meets the girl of his dreams and he and his best friend work together to obtain personal goals before they graduate 8th grade. A fantastic read that might just make you tear up at the end!
Trustpilot
Copyright © 2022 Thriftbooks.com Terms of Use | Privacy Policy | Do Not Sell My Personal Information | Cookie Preferences | Accessibility Statement
ThriftBooks® and the ThriftBooks® logo are registered trademarks of Thrift Books Global, LLC