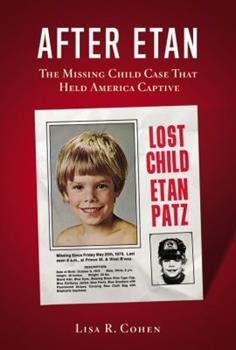 After Etan: The Missing Child Case that Held America Captive

A former "60 Minutes" producer unravels the full story of Etan Patz--a six-year-old boy who disappeared in 1979. Cohen reveals his family's desperate search, the heroic efforts to bring the kidnapper to justice, and the investigation into a decades-long mystery.

Truth is stranger than fiction

Published by Thriftbooks.com User , 12 years ago
AFTER ETAN, Lisa R. Cohen's mesmerizing account of the tragic and complex circumstances surrounding the Etan Patz abduction, is one of the most engrossing books I've read in a long time. I was only 5 years old when the Etan Patz case became a media event, but being from the NY area, it permeated my world for years to come and likely added a sense of paranoia to every parent from my generation. Periodically, the story of Etan Patz would come to mind, and I failed to believe that after so much time this was still an unsolved case. No longer is that true, thanks to this remarkable and multi-faceted triumph. Cohen weaves together incisive factual reporting on every twist and turn of this enigmatic case with the suspenseful, page-turning instincts of a seasoned mystery writer. Cohen delves into the morass of this well documented case and sifts through some of the truly choice details that made it so nagging and painful. Cranks and crazies, psychic visions, hippie communities, jailhouse snitches and one pesky typewriter ribbon- they all coalesce to make AFTER ETAN a nerve jangling ride. Cohen seamlessly weaves together three concurrent and equally captivating stories throughout the book: the suffering of the Patz family and their ability to rise above their grief; the eerie and lurid life of Jose Ramos, the primary suspect in the case who eluded prosecution for years; and finally, Assistant U.S. District Attorney Stuart GraBois' valiant and dogged pursuit of justice. Cohen takes the reader from one unexpected event to the next, flouting the urge to sensationalize the story when it could have been so easy to succumb. As a result, AFTER ETAN stands as a salient piece of non-fiction and a riveting human interest piece. To call it simply a crime story, suspense novel, courtroom drama or even public service would be reductive. It's all of those and much, much more. It also stands as the definitive resource on the Etan Patz story, humanizing this child in ways that his widely-circulated image cannot. This is an essential and rewarding read for anyone willing and able to delve into such an emotionally wrenching story.

The book you can't put down

Published by Thriftbooks.com User , 13 years ago
I don't have a connection to the missing child movement, a part from the fears that every parent has about their children's safety. But even without such a connection, I was drawn to "After Etan", and literally could not put the book down. It's a biography of a winsome boy, an evil drifter, a heroic family and an important movement in our nation's history. It's also a thrilling detective story, written in a style that not only engages, but invites the reader in as a sort of "Watson", accompanying author Lisa "Sherlock" Cohen on an investigation whose outcome is anything but predictable.

Published by Thriftbooks.com User , 13 years ago
Reading Lisa Cohen's powerful reporting is truly cinematic. As you turn page after page--and I promise you, reading this book will glue you to your chair--you will wonder, how did this writer EVER get to all these sources, and knit together such an emotionally charged yet shatteringly objective rendering of the historic Etan Patz case. If you are a parent, you will run to your child and hold him close, all the while wondering how Etan's parents ever lived through this horror with their sanity intact. You will ask questions of the American legal system that you never asked before. I urge you to read this book, even if you imagine that crime reporting is not your thing. This book proves once again that truth is, indeed, stranger than fiction.

Published by Thriftbooks.com User , 13 years ago
As the mother of two sons, it's painful to think about the Etan Patz story. But Lisa Cohen has done a fabulous job of telling this story, and bringing all of the characters to life -- from his parents and siblings, to the detectives who spent their lives looking for his killer, and the prosecutors who would not rest until the family had some closure. Cohen's portrait of Jose Ramos, a convicted child molestor and the prime suspect in the case, is both horrifying and fascinating, and extremely well done. I could not put the book down -- and I am left anxious to know more.

Published by Thriftbooks.com User , 13 years ago
I couldn't put it down...I swear I had tears in my eyes at the end (of a non-fiction book!). While I learned a lot about the case, it also told the amazing story of the parents who somehow found the inner strength to persevere. As a parent, I felt so many emotions while reading and I hope the book raises awareness to keep the case going and molesters off the streets! Highly recommended.
Trustpilot
Copyright © 2022 Thriftbooks.com Terms of Use | Privacy Policy | Do Not Sell My Personal Information | Accessibility Statement
ThriftBooks® and the ThriftBooks® logo are registered trademarks of Thrift Books Global, LLC