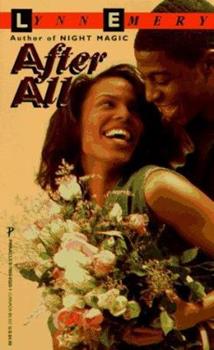 This description may be from another edition of this product. After All by Lynn Emery released on Nov 24, 1999 is available now for purchase.

After all what else is there to do?

Published by Thriftbooks.com User , 21 years ago
Ms. Emery has done it again. "After All" was just that -- AFTER ALL what else is there? The past has a way of coming back to you - sometimes if it is only in your dreams. However, with Michelle Toussaint, the past came back to her big time, not in her dreams, but in the flesh -- in the form of the six-foot-two Anthony Hilliard.Years ago, Michelle thought she had hardened her heart and put Anthony out of her life due to their families' misfortunes. However, love has a way of coming through and overshadowing even when we think we know what is right. In a way, Michelle blamed Anthony for her father's financial misfortune. Both, Michelle and Anthony, felt bound by family ties. However, in order for the two of them to rekindle what they once had, they each had to cut the ties that were binding them.Michelle's job as a reporter gave her the opportunity to get the "goods" on Anthony's uncle, Ike, which would eventually destroy Ike and may well damage Michelle's newfound relationship with Anthony, as well as Anthony's career and his perspective of Ike.Anthony's Uncle Ike is Anthony's mentor. All of Anthony's life, Anthony has believed in, trusted, and looked up to Ike. Yet, Michelle was about to destroy that trust. Would Michelle's actions in turn, destroy Michelle's and Anthony's chance to start anew and revive their feelings of the past? Anthony was willing to start over. Michelle wanted to, but was afraid the old hurts would resurface.Michelle would soon learn that Anthony's family is not the only one to blame for what Michelle thinks nearly ruined her father and upset the Toussaint's happy home. Michelle would eventually come upon the truth that not Anthony, nor Ike, nor even Michelle's father is to blame for part of the problem. Michelle would realize that her mother is a part of the problem as well -- in fact half of the problem involving Michelle's father and Ike Batiste. "After All" is about love, trust, hurt and pain. "After All" is about uncovering secrets that some would say would be better left buried, yet, the scars cannot heal, if the truth is not revealed. "After All" is about setting one free after the truth is told. "After All" is about facing the past and embracing the future. "After All" is about Michelle Toussaint and Anthony Hilliard. Two people who had to put their families' issues aside, accept what happened in the past, learn from it, then continue in the future, and let their love for each other help heal the wounds of the past. AFTER ALL what else does two people do who are made for each other and destined to be together, except forget the past, learn from life's mistakes, and embrace the future. "After All" was a great book.
Copyright © 2020 Thriftbooks.com Terms of Use | Privacy Policy | Do Not Sell My Personal Information | Accessibility Statement
ThriftBooks® and the ThriftBooks® logo are registered trademarks of Thrift Books Global, LLC