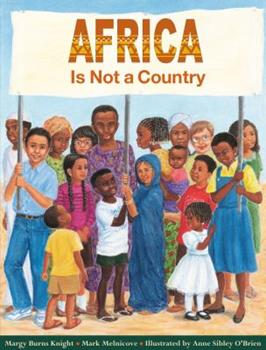 Africa Is Not a Country

Enter into the daily life of children in the many countries of modern Africa. Countering stereotypes, Africa Is Not a Country celebrates the extraordinary diversity of this vibrant continent as experienced by children at home, at school, at work, and at play.

Published by Thriftbooks.com User , 13 years ago
When my daughter attended a five day camp "Olympics Around the World", each day they reviewed a "country" Japan, Great Britain, India, The United States and Africa. All too often, Africa is treated like a country. This refreshing book reviews the lives of children from different African countries. A map is also included and one is able to locate the various countries. My 5 year old son and 8 year old daughter enjoyed trying to find each country. Each page also has a beautiful illustration of children in every country. This is a wonderful book to have in any child's collection.

Published by Thriftbooks.com User , 18 years ago
It's sort of sad that a book like this is even necessary, but I have seen teachers make assignments such as, "Everyone will do a report on how people live in different places. We need reports on Japan, Mexico, Germany, China, and Africa.""Africa Is Not a Country" takes a brief look at the 50-some individual contries that make up the African continent. Each country is presented in a two-page spread, with some text and a large illustration. The text works in lots of facts about each country, without being overly academic. The illustrations are large, colorful, and detailed. The book begins with morning and ends at night and depicts people having breakfast, going to school, doing housework, shopping, playing, etc. The emphasis is always on modern people (not wildlife, not "exotic" tribes). Well done.

Published by Thriftbooks.com User , 18 years ago
Having visited many classes of young children, I have seen the ignorance that children today have about the African continent and the vast cultures that inhabit the mysterious land. Knight's writing is academic, but not too technical, and playful but honest as she presents a look at the daily lives of children from all over the continent. The book is complete with a listing of all the African countries and important facts about them making it handy in the classroom and wonderful detailed stories about specifically chosen countries making it useful for home story telling. Children need this book and the bst part is that they will love it too.

A delightful picture book for children

Published by Thriftbooks.com User , 21 years ago
KNIGHT, Margy Burns Mark Melnicove Africa is Not a Country Millbrook Sep 2000 Grade 1-4 This book dispels the misconception that Africa is a country. The authors narrate the experiences of children at play, school, home, and use realistic illustrations to explore the cultural, environmental, ethnic and social diversity of all 53 countries that make up the African continent. They instruct the reader about each African country, revealing its unique characteristics among the family of African nations. For example on Rwanda, kids are shown making pictures of war, while on Kenya, which is famous for producing long distance runners, the authors show two children running to school, dreaming of one day becoming professional runners. The vast and varied African continent is shown using maps and the different people who inhabit the different environments. From vast deserts with camels in the North, to lush agricultural lands in Central and Southern Africa, the authors introduce Africa to young children in this colorful and easily readable book, and explains that Africa is so large, diverse and complex, it should not be thought as a single nation. Africa has so much to offer: soccer, agricultural products, different religious faiths, fossils, and the diversity is not only of land and culture, but of people too. At the end of the book is an alphabetical capsule of all 53 countries, featuring capital city, population, Independence Day, currency, a pronunciation guide, national flags, and unique facts about the country. Beautifully illustrated and well researched, it will be a joy to young children being introduced to Africa and the many countries that make the African continent. Daniel M. Mungai Queens Borough Public Library, New York City
Copyright © 2022 Thriftbooks.com Terms of Use | Privacy Policy | Do Not Sell My Personal Information | Accessibility Statement
ThriftBooks® and the ThriftBooks® logo are registered trademarks of Thrift Books Global, LLC