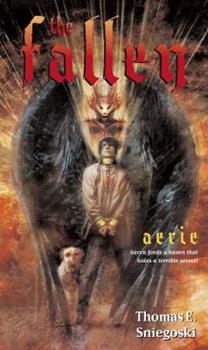 (Book #3 in the The Fallen Original Numbering Series)

haven? or hell?Aaron Corbet is an eighteen-year-old Nephilim and the one who will reunite the fallen angels with Heaven. But right now Aaron isn't interested in saving anybody other than himself, his magically powered dog, and his younger, autistic foster brother, Steven, from Verchiel, the cruel leader of the Powers. Verchiel is bent on destroying Aaron, and with him all hope of angelic reconciliation.With the help of a fallen angel, Aaron manages...

3rd in this excellent series

Published by Thriftbooks.com User , 14 years ago
Aerie is a safe haven for fallen angels. It is a place that Camael has sought, but until now has never found. Aaron, the Nephilim who is the one foretold by a Prophecy - the one who will be the one to forgive the angels who transgressed against God and be able to forgive those who truly repent and send them back 'home' - to Heaven - Aaron, Gabriel, his Lab, and Camael, find Aerie, and the folks in Aerie are skeptical about Aaron. They see that he is a strong Nephilim, but... Aaron begins tutoring by some of the elders in Aerie, but feels his girlfriend, is in danger - she is captured by Vercheil and used as bait to bring Aaron to the Powers so they can kill him - their killing machine Malek, is Aaron's foster brother, whom Vercheil transformed to do his bidding... Aaron proves who he is, and he also finds out who his father is. It has always been an easy 'educated guess' for us readers. A side story of one of Vercheil's prisoners, a man who is truly repentant for his sins, who verbally spars with Vercheil, also brings light to this mystery. This is an excellent book and the series is amazing. The Fallen, Leviathan, Aerie and Reckoning make a formidable series.

This series keeps getting better!

Published by Thriftbooks.com User , 18 years ago
I love the fallen series and was waiting with great excitement for the third book to come out. I got the book on October 31 and finished it the same night.As Aaron grows to understand his powers, the story expands with him. The book follows Aaron, Gabriel, and Camael to Aerie, sanctuary and safe haven for the fallen angels as well as some Nephilim that survived the wrath of the Powers. As Aaron struggles to maintain his humanity while learning about his angelic heritage, we learn about what really happened in the War at Heaven's Gates from the source that started it all as the identity of Verchiel's prisoner is finally reviled. We also learn that Aaron's father is... ^_^ Didn't think I was actually going to spoil it, did you?My friends and I have all followed the Fallen series closely and I speak for all of us when I say that we are waiting for Reckoning with great anticipation.
Copyright © 2020 Thriftbooks.com Terms of Use | Privacy Policy | Do Not Sell My Personal Information | Accessibility Statement
ThriftBooks® and the ThriftBooks® logo are registered trademarks of Thrift Books Global, LLC