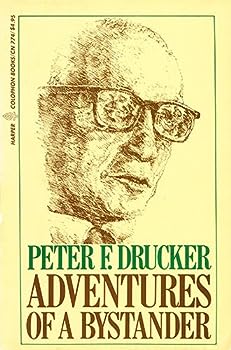 Adventures of a Bystander

This description may be from another edition of this product. "It is [a] belief in diversity and pluralism and the uniqueness of each person that underlies all my writings . . . " -from the Preface. Regarded as the most influential and widely read thinker on...

Published by Thriftbooks.com User , 15 years ago
Drucker clearly explains how rampant inflation in post WW I Germany influenced the rise of the Nazi party and Hitler. This discussion should be required reading for every 14 year old child! I particularly liked his stories of Willem Paarboom, a sort of Dutch hedge-fund/investment manager who appeared to be a cross between a man and a raven. In his day, Herr Drucker was exposed to some truly elegant and unorthodox thinkers. He adds his own illuminating interpretations and is not afraid to engage in contrary thinking. (Especially when to do so is out of vogue) Read about Dr. Mordecai Johnson and his views on the "American Negro Problem" and you will never contemplate African slavery the same way again. I consider Drucker to be one of the brightest minds of the 20th century, and his genius is on full display here. Certainly, this is one of the most provocative and influential books that I have ever read! (Drucker particularly liked the "sqwoosh, sqwoosh" sound when jumping in puddles.)

Published by Thriftbooks.com User , 16 years ago
Not really an autobiography, not quite a memoir, part biography, of the people he has known in his life, some famous, some not. And Drucker is still alive, now 95 years old. It was a dense, fact-filled book, but always fascinating. He is an amazingly prolific, gifted, engaging writer. And what he has to say about America and The American Dream in the last pages of the book is no less true today than it was in the late 70's when it was written. He writes of Sigmund Freud (things you haven't read before), Henry Luce, Alfred Sloan, John L. Lewis, and Buckminster Fuller among a host of other characters. A very rewarding, thought-provoking read. Highly recommended. Especially for those of us who want to read history by the people who lived it.

Published by Thriftbooks.com User , 20 years ago
Instead of the usual self-focused auto-biography, Drucker introduces us to the people that have shaped him. Some are famous (Bucky Fuller, Marshal Mcluhan) some are not (his elementary school teacher). Some are good, some evil, but they are are worth meeting, especially through Drucker's eyes. A good read.

A gem, the best one could hope for in discovering Drucker.

Published by Thriftbooks.com User , 23 years ago
Wonderful and a joy to read for anyone interested in the life and times of one of our best and among our first great management consultants. Drucker's stories are so enlightening in both a historical context and in terms of the develoment of the profession of management. Nothing has so thrilled me in appreciating this short history of western industrial civilization from the eyes of this original thinker. I review 10-20 books a year for different professional management journals but this is one of the most enjoyable as well as educational book I have ever read. Far beyond the work of Tom Peters and other known pundits, this is the work of a man with experience that easily transcends six decades. In a world of rush, rush and fads ad nauseaum this work is full of wisdom. Few other books would satisfy as well for anyone wanting to know about the man, his times and the forces that have created the management profession. Please tell Peter to get this book out to a wider audience and to bring several hundred copies to the 1998 Academy of Management meetings in San Diego this summer and I will try to bring my copy for his signature. This is the one book I have gotten up in the middle of the night to read just for the pure pleasure of reading. In fact last night at 4:30am I had to circle his commentary of "self governing workplace communities" so that in my own work I dont fail to cite the original source of ideas that many of us are researching and talking about today. Peter was only 50 years ahead of the field on this theme and I personally hope he will be around to help us develop these ideas for the next half century. ken
Copyright © 2020 Thriftbooks.com Terms of Use | Privacy Policy | Do Not Sell My Personal Information | Accessibility Statement
ThriftBooks® and the ThriftBooks® logo are registered trademarks of Thrift Books Global, LLC