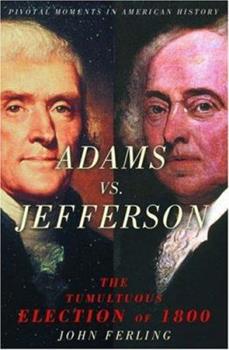 Adams vs. Jefferson: The Tumultuous Election of 1800

It was a contest of titans: John Adams and Thomas Jefferson, two heroes of the Revolutionary era, once intimate friends, now icy antagonists locked in a fierce battle for the future of the United States. The election of 1800 was a thunderous clash of a campaign that climaxed in a deadlock inthe Electoral College and led to a crisis in which the young republic teetered on the edge of collapse. Adams vs. Jefferson is the gripping account of a turning...

Great read for all Americans

Published by Thriftbooks.com User , 16 years ago
Think the last two presidential elections have been nail biters? Then you should take a look at the presidential election of 1800. That election ended in an electoral college tie and took 36 votes by the House of Representatives to pick a President. Today's elections have nothing on what it took to decide the winner back then. John Ferling gives readers a fresh and contemporaneous look at the election of 1800 and the events that led up to it in, Adams vs Jefferson, The Tumultuous Election of 1800. He shows how this election was really the final battle of the war for American Independence. The book covers the moves made by all the major players of the day including men like Alexander Hamilton and James Madison. It was a titanic battle between the most powerful politicians of the era. It was a time when political parties were just beginning to form and there was more than just two candidates for the office. In fact, most politicians felt that the office of President should seek out the man instead of the man actively running for the office. I know - that's a radical thought today. Adams was the sitting President and like so many modern Presidents he started his term in a flurry of success only to stumble down the stretch. Jefferson was `retired' from political life on his Virginia plantation, Monticello when his supporters began to push him to run. Because of a flaw in the Constitution the electoral college locked in a tie between Jefferson and his running mate, Aaron Burr, with Adams eliminated from the race entirely. Adams and Jefferson were both heroes of the American Revolution, but both men also had issues with their reputations. The parties exploited the flaws of the opposition in ways that make more modern elections seem tame and civilized. There was name calling, back room deals for votes, and outright voter fraud in many places. The two men had been the best of friends during the Revolution, but this race caused a bitterness that kept them from speaking to each other for nearly twenty years. Adams vs Jefferson is worth reading to get a better understanding of how many problems our nation had in the early part of its history. It's an important story that never seems to be taught in our schools. This election led to the 12th Amendment to the U.S. Constitution, it laid the groundwork for the Civil War, it was first time that a member of the opposition party had ousted the sitting President without bloodshed and it killed the political career of Alexander Hamilton; confidant to George Washington, the founder of the national bank and architect of our monetary system. This book should be required reading for anyone that is registered to vote.

A tale of the Revolution and its ultimate conclusion

Published by Thriftbooks.com User , 17 years ago
While the focus is on the critical election (the first truly contested Presidential election that led, eventually, to a peaceful transfer of power in the nascent Republic) this book spends considerable time providing biographies of the principals -- Adams, Jefferson, Pinkney, Burr, Hamilton, and others -- involved in the contest. It gives extensive and understandable background to the conflict between the Federalists and the new Republicans -- a conflict whose rhetoric made the elections of 2000 and 2004 look like the calmest of civil debates (albeit the modern candidates couldn't hold a candle to those in 1800). Political dirty tricks, statehouse maneuverings, and a flawed electoral process defined in the Constitution ended up sending the election to the House of Representatives, where further furious deal-making and political chicanery barely led to our not ending up with a President Burr ... Again, another fine, clear tale of the Revolutionary Era and the election that served as its "consummation," both proving that the Republic could endure and setting the grounds for the Jeffersonian Republican dynasty that so profoundly shaped American history. This unabridged 10 CDs (vs. 260pp) book is well narrated by Jack Garrett, who brings a newscaster's flare to the conflicted tale he tells.

Published by Thriftbooks.com User , 17 years ago
Although the title of this book suggests that it is about the Presidential Election of 1800, it is really about the relationship of Adams and Jefferson dating back to their blissful time together as US delegates in Paris during the War of Independence and tracing that relationship till the Election of 1800 when they went to war against each other. If anything else, Ferling, a staunch "Republican" in the 1800 sense, helped me to understand the greatness of Jefferson, and to a lesser degree, Adams. Jefferson has come under attack recently due to his connection with Sally Hemings and tacit endorsement of slavery and opposition to Hamilton's economic reforms. I was wondering why he has been so revered, and now I have a better respect for him. I also have a better understanding of why the Federalist Party that Jefferson railed against was seen as a potential threat in its day and why it precipitously died out. Ferling's writing and research are absolutely first rate, it's easy to read and very informative and insightful. I also enjoyed learning about the other characters such as "CC" Pinckney, Burr, and numerous other second level players who held sway in their day but haven't received much recognition. The only negative, besides giving Hamilton the short shrift, is that Ferling spends too much time analyzing and counting and explaining ad nauseum and ad infinitum possible electoral voting records and outcomes, similar to what CNN does with a map of the US during a presidential election. All in all, a first rate book. And even though I knew the outline of the story before I started reading the book, the facts and quotes, etc, were in large degree new to me and helped to deepen my understanding of these two men and the Election of 1800 and the first few decades of our new nation.

Battle of the Titans.

Published by Thriftbooks.com User , 17 years ago
The election of 1800 is notable for many reasons. It was an electoral tie, it led to the 12th Amendment to the U.S. Constitution, and it was an election in which both sides feared that the election of the other party could lead to the end of the United States. Of even more importance however was that this election signaled a basic realignment of the American electorate and a growing sense of tension between Northern Merchant interests and Southern agrarian interests. The election of 1800 also marked the first time that a member of the opposition party had ousted the sitting head of state without bloodshed and for all intents and purposes this election ended the political career of Alexander Hamilton. For these reasons this election is one of the most important events in American history and a book like this is long overdue. When I first picked up this book I was afraid I was not going to like it at all. After having read some of the reviews of this book I decided that Mr. Ferling had written this work in a dry, pompous academic style and for some reason the dust jacket reinforced that idea. I am pleased to say however that I really enjoyed this book and found it to be well written and very well researched. The author has gone through numerous collections of personal correspondence, Congressional records, and apparently even court transcripts so that he might properly tell this story. Unfortunately some of the facts about this election will never be known due to closed door caucuses and purposely destroyed correspondence. Where the evidence survives however, Ferling has sniffed out the story and given us a lively account of this fascinating election. I was glad to find that the author was very even handed in his approach to this topic. Since he had previously written a biography of John Adams I would not have been surprised to find that Mr. Ferling was unable to shed the all too common biographers bias toward their subject. Happily however, Mr. Adams' faults are discussed just as often as those of Jefferson and Burr are. Alexander Hamilton is the only major player in this story that comes across in an almost entirely negative light but even friendly Hamilton biographers agree that this was not Hamilton's finest hour. It is certain that John Adams is slowly being rehabilitated by history and this book like most recent studies of this time period is fairly complimentary of the second President. On the other hand Jefferson's reputation has been on a downward spiral but thankfully Mr. Ferling does not add to Jefferson's current woes. This election may not have been the Virginian's finest hour either, but as the author points out the most questionable of Jefferson's actions may have been in the best interest of his country. Sometimes moderation is indeed a virtue and we all might do well to remember that lesson and apply it to today's problems.

Published by Thriftbooks.com User , 17 years ago
If you thought the 2004 Presidental battle between Kerry and Bush was fierce, read about the tension, and bitterness between John Adams and Thomas Jefferson. That tumultous election of 1800 ended in a stalemate in the Electoral College. Author, John Ferling thoroughly researched this historical political slug-fest, and indicates, "tensions ran so high that the Republicans threatened civil war if the Federalist denied Jefferson the presidency." The book gives readers an extensive look at the fiesty fore- fathers of America, and the crucible of the polical process. Highly recommended reading.
Trustpilot
Copyright © 2022 Thriftbooks.com Terms of Use | Privacy Policy | Do Not Sell or Share My Personal Information | Accessibility Statement
ThriftBooks® and the ThriftBooks® logo are registered trademarks of Thrift Books Global, LLC