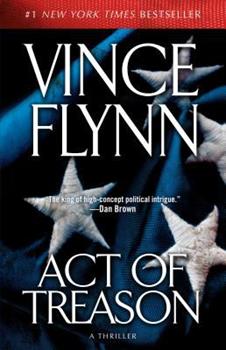 (Book #9 in the Mitch Rapp Series)

The fallout from a horrific Washington explosion has just begun -- and so has CIA superagent Mitch Rapp's hunt for a killer with a personal agenda.In the final weeks of a fierce presidential campaign, a motorcade carrying candidate Josh Alexander is shattered by a car bomb. Soon after the attack, Alexander is carried to victory by a sympathy vote, but his assailants have not been found. When CIA director Irene Kennedy and Special Agent Skip McMahon...

Published by Thriftbooks.com User , 15 years ago
I'm still thinking about this book 2 days after finishing it. In this excellent read, the good guys and bad guys are using the same tactics, so what distinguishes them? Which is the true act of treason? We know almost from the start who the bad guys are and what they are doing. Flynn creates suspense in the use of time and the potential "emasculation" of Kennedy and Rapp and the looming Inauguration. How fast they act to neutralize the danger in the face of this threat is what drives the suspense. Ultimately how it is done and who does it surprises even Mitch Rapp. Implosion and threat from within the government has been a constant theme in Flynn's last few books. The book's ending rips the covers of denial off our eyes and presents Kennedy's and Rapp's methods in the full light of day. Kennedy has taken her gloves off. Side notes -- the introduction of Gracie Jiujitsu I find amusing, having read every single one of Barry Eisler's John Rain series. And although removing Mitch's unsympathetic, whiney (albeit stunning) wife was a good move, having Mitch deal with his grief only through a 6-month binge and not showing the effects of her death on his life in any other way is not realistic. Makes him sort of a robot, and he is not. Let's remember his original motivation/creation was the death of a friend in Flight 103 Lockerbie.

Another Winner From Flynn!

Published by Thriftbooks.com User , 15 years ago
Vince Flynn has once again written another oustanding book in his series of exciting books.His favorite character Mitch Rapp comes through like gangbusters once again. The Democratic Party ticket for the Presidential election is trailing badly with no hope of catching the Republican ticket before the election is held.Presidential nominee Governor Josh Alexander of Georgia and Vice- Presidential nominee Senator Mark Ross of Conniticutt are fixing to go down for the count.As election day approaches the Democratic ticket is attacked in a bombing in Washington D.C.The Presidential nominee's wife and several Secret Service agents are killed in the blast.The attack is believed to be an al-Qaeda attack.As a result of the bombing the ticket of the Democratic Party is swept to victory on a huge sympathy vote.The Democratic Party will soon occupy the White House. CIA Director Irene Kennedy and FBI agent Skip McMahon are presented with stunning evidence that puts a new theory on the attack.The decision is made by the two to turn the investigation of the bombing over to CIA operative Mitch Rapp.He soon makes some stunning discoveries that will prove to earth shattering.It falls upon Rapp to handle this situation. This is another very good Flynn book that you do not need to miss.

Flynn Remains at the Top of His Game

Published by Thriftbooks.com User , 15 years ago
Some of us were wondering if Mitch Rapp had gone a bit soft after the last novel. The wondering is over and the answer is NO! Irene Kennedy is still head of the CIA and after a the Democratic ticket's motorcase is attacked by a roadside bomb in the nation's capital, killing the wife of the presidential candidate, she has sent Rapp to try and find the perpetrator. The country suspects Bin Laden's people and sympathy for the subjects of the attack turn their floundering campaign into victory. As the country moves from election to innauguration a horifying plot is exposed and Mitch Rapp is once again at the center of it. This is pure and adulterated Vince Flynn and there is nothing about this book that will disappont his many fans. The pages will turn as easily as ever.

Pure escapism, a night without sleep!

Published by Thriftbooks.com User , 15 years ago
For mystery/thriller fans this is pure nirvana. I read the entire book in two sessions and lost a night's sleep. The only disappointing thing about this Mitch Rapp adventure is that it was over too soon. If you enjoy reading for pleasure, to escape the troubles of your day, this is just what the doctor ordered. Vince Flynn just gets better and better. The writing is fast paced, and easy to read. The tension and plotting are believable and the characters, good and bad are enjoyable.

Published by Thriftbooks.com User , 15 years ago
I am a very big fan of author Vince Flynn and have more expectations from this writer than almost every other storyteller. If you are like me, and have a penchant to be drawn to the genre' of clandestine political espionage and back-channeled international suspense, then you will dive right in to what I believe stylistically is a page-turning, mind-absorbing, savvy political thriller in Vince Flynn's `Act of Treason'. Similar to `Consent to Kill', the author has mastered the three important facets necessary for exceptional historical fiction: believability, currency, and valuably innovative plot line development. Splashed in throughout is a keen understanding about the world of operatives and the intelligence community very few individuals know or talk about. Furthermore, the author uses other fascinating factual tidbits of information that keep the reader moving, and allowing the necessary balance to occur that provides great credibility to the what if points author Flynn is clearly making during this ongoing state of war against terrorism individuals of freedom must persevere through. As a writer who concentrates in the genre of international espionage such as Mr. Flynn, I openly want to say that CIA operative Mitch Rapp is such an engaging and cleverly created character. As I want to relate in part to my own protagonists that push the pages of some of my own novels, there is a great connection between Rapp and the reader. Well done! The story begins with a presidential motorcase explosion that throws the administration upside down, and ignites would-be-voters to stand strong behind their current president seeking reelection. Conspiracy theory lovers unite? Maybe . . . but Flynn has a series of surprises that spin one after the other. Enjoyably, 'Act of Treason' is not solely a shoot-em-up story: it is thoughtful, insightful, and educational while always keeping the reader is a state of suspense. As an educated 'read', this is where, in my opinion, Vince Flynn is coming completely into his own mastering the craft mystery/suspense writing. In the historical thriller, regardless of the micro genre', the fact remains that the credibility of the story must never be questioned. In `Act of Treason', readers will find Vince Flynn delivers high marks across the board. Once you put `Act of Treason' in your hand, good luck putting it down! Well done, Mr. Flynn.
Copyright © 2022 Thriftbooks.com Terms of Use | Privacy Policy | Do Not Sell My Personal Information | Accessibility Statement
ThriftBooks® and the ThriftBooks® logo are registered trademarks of Thrift Books Global, LLC