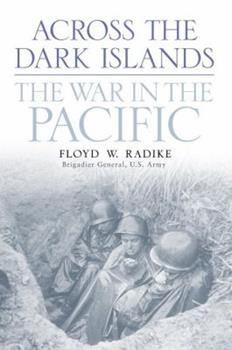 Across the Dark Islands

An account of a soldier's experiences during World War II describes his arrival at the front lines as a junior officer in a National Guard unit, the near-misses he survived, and his witness to the courage of fellow officers.

A personal account of the war in the Pacific.

Published by Thriftbooks.com User , 13 years ago
A rather humble soldier (who later became a general) describes his experiences in the Second World War as he island hopped from the Canal to New Georgia, and finally the Phillappines. He relates his combat experience to those who sought to advance their own career without regard to the men underneath them. This showed the appearance of advancement when in fact it was needless loss of life and little gain. Floyd also shows how the command system expropriated the physically best men and gave the front lines units those that nobody wanted. This shows how war is unequal to both the uneducated and unfit. The author describes it on how it is. It is a nice read that shows the bad life of the grunt on the line. Since this is the author's only book, it is more believeable than many from this time period.

Published by Thriftbooks.com User , 14 years ago
This is one of the best books I've ever read, about any subject, hands down. Floyd W. Radike was a Lieutenant in Company B, 161st during WWII. They were a Washington State National Guard unit that was attached to the 25th Infantry Division after Pearl Harbor in 1942. I bought this book because I wanted an on the ground account of what the men of the 161st actually experienced during WWII. I was not disappointed and I believe that any person wanting a first person account of the war will not be disappointed either. Brigadier General Radike never intended to publish this as a book. These were his private memoirs. His wife, Lydia, was not even aware that he had written them until after his death. She did us all a great service by deciding to publish his memoirs. She is a really wonderful woman who deserves our thanks and appreciation for publishing this book. Nothing has been omitted or rewritten. What you read are the true words of Floyd W. Radike. Inside this book, you will find accounts of hardship, humor, bravery, cowardice, friendship, and rivalry. You will come away with the understanding that the Marines and Navy were not the only branches of the Armed forces to deserve widespread recognition for their service in the South Pacific. The Marines were first in, but the Army stayed for the long haul and finished the job while battling some of the worst conditions men ever faced during WWII. They fought while suffering from dissentary, malaria, jungle rot, dehydration, and exhaustion. They waded through mud up to their knees in sweltering heat and lived in constant tension and fear. Despite the horrendous obstacles they had to overcome, they got the job done. That's why the 25th I.D. earned the nickname "Tropic Lightning" during the Pacific Campaign. The words of Floyd W. Radike sum it up best: "Ninety percent of the casualties (death, wounds, disease) were borne by the infantry. Since replacements were slow in coming, infantry companies were the size of platoons after Guadalcanal and the size of squads after New Georgia. In contrast the reduction in strength for support troops was minimal. When we speak of war, in its fullest sense, we speak of the fighting men-the infantry. Only the medics shared-often in heroic fashion-the stringencies of the front line."

The side of war that isn't often talked about.

Published by Thriftbooks.com User , 14 years ago
Across the Dark is Brigadier General Radike's descriptions of his own personal experience of World War II where he was in the National Guard and was involved in many of the combats in the Pacific (NOTE: he was not a Brigadier General during the war). Radike is very specific in his opinions of the way the situations he was involved in were handled and he doesn't hold anything back so he is quick to point at flaws of the US Military, but he does try to be fair in pointing out the things that are done right. While reading this I got the feeling that this was written during the war or immediately after because it sounds very simliar to the way a lot of people complain about their current companies. I also came to that conclusion since this was not published until after his death, almost as if he didn't want to publish it, but who knows. With that criticism in place, I thought this was a very well written book that helps to explain the parts of war that are not always advertised. Most of us have heard about Iwo Jima or Normandy, but not many people have heard about the events that took place on all of the other Pacific Islandsd and he does a great job of explaining all of the obstacles that had to be overcome and the lack of knowledge that soldiers often had to deal with such as landing on an island and not having a map available. The one thing I really wish would have been included would have been an introduction or prologue by Radike describing his thoughts on everything after making it to the ranking of Brigadier General and having that much more experience under his belt. It would have been truly interesting to see how his thoughts might have changed if at all.

More than a well-written war yarn

Published by Thriftbooks.com User , 14 years ago
"Across the Dark Islands" seems to have been completed by 1984 but was not published until after Floyd Radike's death. No wonder. This is one of the harsher indictments of Army incompetence and dishonesty to come out of World War II. In addition to that, it is a finely-crafted, too brief memoir of a platoon leader's three campaigns in Guadalcanal, New Georgia and Luzon. Radike was a National Guardsman (apparently originally in a Michigan outfit, later in California) who went through OCS shortly before Pearl Harbor. He ended up in the 1st Battalion, 161st Regiment, 25th Infantry Division. (Not the 37th, as one sloppy reviewer in a military publication has it.) The 25th was a wartime incarnation of the old Hawaiian Division, a Regular outfit, but the 161st was a Washington National Guard unit. Radike was a double outsider -- the Regulars weren't going to let the Guard get ahead, and the Washington Guard officers formed, he says, a tight clique. The result of this careerism and militia incompetence was needlessly dead young GIs. Radike is scathing in his criticism, but this, the most important part of the book, is ignored by all the published reviews I have been able to find, which have been in military specialist magazines (mostly of the yahoo blood and guts variety). Too bad. "Across the Dark Islands" deserves more and more thoughtful attention than it has gotten. The book is particularly valuable because Radike tells what he knows of the American regiment that turned tail and ran on New Georgia. The 161st was attached to the 37th Division to plug this hole. According to Radike, the story of the panic-stricken regiment of the 37th (which he calls X Regiment) is not included in the Army's official histories, and even the name of that regiment has been suppressed. The Navy knew, though, and while details are made available here that have been lacking in the naval histories, the disgraceful slowness, confusion and incompetence of the Munda campaign are sketched out in the naval histories. Radike's is, however, the closest to an eyewitness account I have discovered. On a more personal level, "Across the Dark Islands" would be a wonderful gift for any young infantry officer or enlisted man. Radike, who eventually became a one-star in the Michigan National Guard, was a thoughtful officer, and there's more here about how to lead and fight a platoon than in a stack of Field Manuals. Last but not least, Radike, a teacher in civilian life, is a graceful and careful writer. All in all, the book is a pleasure to read, a valuable if small contribution to Pacific War history and a cautionary tale that our 21st century higher command ought to become familiar with: the stupidity that Radike had to live with in 1942-45 is still killing young GIs in 2006.

Published by Thriftbooks.com User , 16 years ago
i couldn't put this book down. the author gives a very graphic & detailed account of the war in the pacific. what i found idelible, was the authors desciption of the whole setting of the war. it was as clear and detailed as the moment he had experienced them. the WWII generation was truly the most extraordinary generation of americans, complaining very little, & offering everything to their country for a better and safer future. to hear their experiences in their own words, is a truly invaluable.
Copyright © 2020 Thriftbooks.com Terms of Use | Privacy Policy | Do Not Sell My Personal Information | Accessibility Statement
ThriftBooks® and the ThriftBooks® logo are registered trademarks of Thrift Books Global, LLC