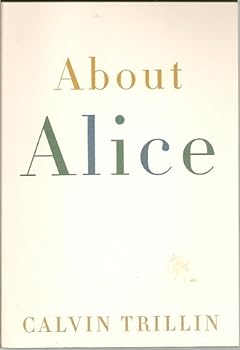 This description may be from another edition of this product. In Calvin Trillin's antic tales of family life, she was portrayed as the wife who had "a weird predilection for limiting our family to three meals a day" and the mother who thought that if you didn't...

Published by Thriftbooks.com User , 14 years ago
Calvin Trillin's heartfelt, touching, and occasionally humorous tribute is an expanded essay about his affection for and appreciation of his late wife, Alice. She was a stunning blonde who turned heads whenever she entered a room, but she never coasted on her good looks. Alice's integrity, character, marvelous sense of humor, unflagging energy, optimism, and down-to-earth personality made her stand out; she had a unique talent for reaching out to others and making her family, friends, and students feel valued and appreciated. Alice was a skilled listener who dispensed detailed advice, consolation, and genuine sympathy when appropriate; she had a gift for relating to people intimately without being sloppily sentimental. She lent a helping hand to "anyone she loved, or liked, or knew, or didn't quite know but knew someone who did, or didn't know from a hole in the wall," said Nora Ephron. Alice wrote letters--what a lost art letter-writing is!--and her letters were works of art. Trillin married Alice in 1965 and they enjoyed over thirty-five years together until her death on September 11, 2001. At their first meeting in 1963, Calvin was impressed by Alice's radiance. He never stopped trying to impress his wife and she never failed to impress him. Throughout her career, marriage, and even during her courageous battle with lung cancer and later, heart disease, Alice demonstrated that she was not just a pretty face. She was a enormously gifted, intelligent, and creative woman who was gave of herself unstintingly. She taught college kids, drug addicts in rehab, and prisoners in Sing Sing. "She always took it for granted that people who wanted to learn could be taught no matter what their background," and she routinely inspired her students to reach higher than they ever thought they could. She was also a talented writer, editor, and producer for educational television. Above all, Alice was a devoted wife and mother. Her love of family was shatterproof; she was a fiercely protective and involved parent who made sure that her husband and her two daughters, Abigail and Sarah, knew how much she cared for them. Alice may be gone now, but her beautiful legacy lives on.

I WISH I HAD KNOWN HER

Published by Thriftbooks.com User , 14 years ago
I wish I had known her. Some five years after her death, The New Yorker magazine writer par excellence Calvin Trillin has penned a loving, touching portrait of his late wife, Alice Stewart Trillin, whom he married in 1965. Mr. Trillin has claimed that his work is not as good since she died as she used to edit his drafts. That's a bit hard to believe as while I've not read all of his articles and books, I have eagerly consumed several and found "About Alice" to be as impeccably crafted as his earlier works. He's a writer blessed with a goodly share of humor, keen observation, and the ability to make even the most everyday things, such as the quest for a parking space, intriguing. Those who have read Mr. Trillin are familiar with Alice as she has appeared in many of his writings. We believed we knew her. Not really. As Mr. Trillin once noted in looking over the letters of condolence he received. So many felt that they knew her; a fact he believes she'd deny. She felt he portrayed her as a sort of a dietician in sensible shoes. In fact, he noted this description of her in a speech he once made and was asked whether or not she was in the audience and if so, would she stand? Stand she did without saying a word, simply waving a very expensive high heeled shoe in the air. She was, as he describes her, a mother who thought that if you didn't go to every performance of your child's school play, "the county will come and take the child." She was warm, extremely intelligent, and generous, sometimes overlooking the inflation in a repairman's bill with, "He doesn't have a very nice life. And we're so lucky." They were opposites; for him, it was love at first sight and obviously still is. "About Alice" is, of course, about a remarkable woman but it is also the story of a marriage. As read by the one person who should do so, Mr. Trillin, it's a book that should be heard by everyone who is in love, all who were in love, and those who want to be. - Gail Cooke

Published by Thriftbooks.com User , 14 years ago
Read this book and be a voyeur of a marriage that sparkled with wit and love. One of the most beautiful tributes to a wife that has ever been written, told in a style that is smart, funny and provacative. Who better to write this story than the incomparable Calvin Trillan who has a plain spoken and ironic style.

Published by Thriftbooks.com User , 14 years ago
Putting down Calvin Trillin's 'About Alice' one word came to mind: 'Beautiful'. Writing with deep affection that readers will easily connect to, the author demonstrates through action and his writing the unlimitedness of love and the human spirit. I truly enjoyed this book, written by a provocative author whose writing has influenced many of us.

Published by Thriftbooks.com User , 14 years ago
"About Alice" is Calvin Trillin's love song to Alice, his wife who died far too soon in 2001. Reading Trillin's evocative prose tonight brought laughter and tears. How I wished I had known Alice...
Copyright © 2020 Thriftbooks.com Terms of Use | Privacy Policy | Do Not Sell My Personal Information | Accessibility Statement
ThriftBooks® and the ThriftBooks® logo are registered trademarks of Thrift Books Global, LLC