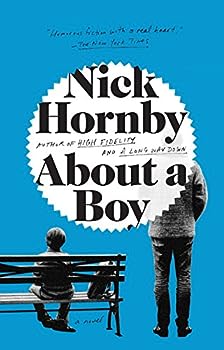 This description may be from another edition of this product. Will Freeman, a 30-something Londoner, is vaguely in search of a wife, but is simultaneously turned off by the responsibilities that a real life might entail. He befriends young Marcus, son of a...

Published by Thriftbooks.com User , 15 years ago
Having enjoyed Hornby's more recent novels, HOW TO BE GOOD and A LONG WAY DOWN, I thought I'd start reading his earlier novels. Hornby has a gift for taking on big existential themes like despair and suicide and presenting them with a gentle but incisive humor that doesn't trivialize them. And he peoples his stories with a heterogenous mix of characters who seem determined to misunderstand one another but who eventually make their compromises with life without too much loss of dignity and who discover something greater than romantic love or sex--a deep sense of community, a profound and inclusive sense of rootedness in a shaky and transient world. ABOUT A BOY centers on the relationship between a young boy, Marcus, and an unattached, cool bachelor, Will, who has joined the boy's mother's support group SPAT (Single Parents-Alone Together) as a way to meet grateful but unclingy women. It is clear from the start that Hornby could have named this novel ABOUT TWO BOYS and the novel has much to say about what it means for boys and perennial bachelors to grow up. It has much to do with taking risks, opening oneself up to other people (even to those you want nothing from), honoring real losses, and taking life on life's terms. As the wise child Marcus observes, two is not enough. He believes in "human pyramids." "I feel better and safer than before," he tells his late-to-the-game real father, "I was really scared because I didn't think two was enough, and now there aren't two anymore. There are loads. And you're better off that way." A word to those who saw the movie: The book is really worth reading, so don't dismiss it if you didn't like the movie. Although I can't imagine anyone but Hugh Grant delivering Will's lines (and all of the casting was excellent), the book does NOT end with a corny middle-school talent show. Hornby uses another event to bring the story to a head and resolve its many little plot lines, one more germane to the themes of the book. All in all, a more thoughtful and satisfying ending.

Published by Thriftbooks.com User , 17 years ago
First of all I want to say, that I never really wanted to read this book at first! But the within the scope of English lessons I had to do so. Unwilling I started to read and after a few pages I was really enthusiastic about it. This book is written with such looseness and I often had to smile. Even for people who do not have a big experience with the English language it should be easy for them to read this book.But this fact is not the only thing which pleases me. The topics, and especially the development of the two main characters, Will and Marcus, are interesting to follow. Will develops from an adult who wants to be eighteen once more to a grown-up person. The parties and one-night-stands are not still the centre of his daily life. He begins to believe in long-term values like a fixed relationship or real friendships. But he never loses his own identity.On the other hand there is Marcus, "the oldest twelve-year-old in the world". This boy had to live through a lot of disasters in his live. Just to name a few of them, there is the divorce of his parents and the subsequent move to London, where he is not able to make new friends, and the suicide attempt of his mother. He meets Will and the two become friends. This dissimilar couple is able to help each other managing their own lives. But I do not want to tell too much! Just read and find out what the "Dead Duck Day" is all about!

Published by Thriftbooks.com User , 18 years ago
About a Boy really gets to the heart of what it means to be a boy, and as we all know, boys come in all ages. The two main characters are Will and Marcus. Will is a professional at keeping disconnected. He lives off of the royalties from a song his father wrote. This has allowed him to live a carefree life of unemployment. However, there is a dark side to this. The song ruined his father's career, and slowly it's eating away at Will's soul as well, even though Will likes to pretend that he is happy with his life. Enter Marcus. Marcus a 12 year old product of a broken home, changes Will's life forever. In the end, both boys find their own way of growing up. If you're a woman and you have trouble understanding what men are thinking, this will show you the inner workings of a man's mind better than a thousand books on relationships. Be careful though, the truth might be a little scary for you. As for guys, you might realize some things about yourself that you have never thought about before. For those who have seen the movie and are wondering if they should read the book or not, you should know that the ending of the book is completely different from the movie. You really should give it a read.

Published by Thriftbooks.com User , 19 years ago
I must admit, if it wasn't for the movie version of this book, I may never have read About a Boy. I knew the book existed, but was never compelled to read it. Then I saw the movie and realized what I was missing. And while the book and movie endings are different, About a Boy (the book) is nothing short of spectacular.Will Freeman, quite possibly the world's most useless man, is jobless and responsibility-free -- and he likes it that way. Living off the royalties of his father's one hit song, Will finds his days full of lounging around, going to movies, and sitting in front of the TV watching Countdown. And while all this free time is at his disposal, Will has plenty of time to discover that single moms seem to be the most grateful for a date with him. Thus, Will puts a fool-proof plan into motion -- make up an imaginary son and join one of those single-parent support groups in an effort to meet women.However, About a Boy is not all about Will meeting single mothers. It's... about a boy, Marcus, the 12-year-old son of one of the single mothers who comes into Will's life and turns it upside down. Suddenly Will finds himself, unwillingly, as some sort of mentor or father figure for Marcus, which totally distracts Will from his true purpose of being free from problems and responsibilities.I loved About a Boy. The writing is authetic Nick Hornby, full of humor and sarcasm, but also there is a lively perceptiveness at work here that goes to show you one spontaneous decision can sometimes add meaning to your life. Prepare to laugh out loud with this one!

Published by Thriftbooks.com User , 21 years ago
"About A Boy" shows Nick Hornby's maturity in his writing. This novel is about the sweet relationship between a 12-year-old outcast and a 36-year-old playboy, both of whom narrate the story. Marcus, the boy, is tragically unhip and is horribly teased at his school. Will, the man, is living easily on royalties of his father's work without a care in the world. When their paths meet, the story is a rich coming-of-age for both, with its share of humorous and heartbreaking moments.Will joins a single parents group in hopes of meeting a sector of women he didn't knew existed. Through a racked chain of events, he meets Marcus (and Marcus's mother). Marcus comes to enjoy Will's company, and when he discovers Will's little secret, he blackmails Will into helping him. Will can teach him how to be cool and tell him important stuff like who Kurt Cobain is. But when Marcus is confronted by his mother about the mysterious trips he takes after school, it looks like the jig is up--for both Marcus and Will.Hornby wrote this book in the third person, and I believe that gave him a little more "room to breathe". He cane look at situations from more than one point of view and write with a more objective frame of mind. This makes "About A Boy" highly enjoyable and accessible to all audiences.
Copyright © 2020 Thriftbooks.com Terms of Use | Privacy Policy | Do Not Sell My Personal Information | Accessibility Statement
ThriftBooks® and the ThriftBooks® logo are registered trademarks of Thrift Books Global, LLC