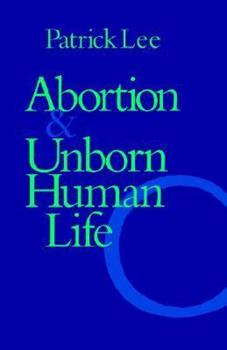 This description may be from another edition of this product. Is it ever morally right to procure an abortion, to help procure one, or to perform one? Patrick Lee surveys the main philosophical arguments in favor of the moral permissibility of abortion and...

Published by Thriftbooks.com User , 14 years ago
As someone in the process of writing a Ph.D. in bioethics, allow me to say that this is essential reading. Not only has Patrick Lee written a great introduction to natural law thinking, he may also have written the single best pro-life book in print today. Lucid, concise, and logical, I think of this work as a standard that my thinking should be modeled after and should measure up to. I encourage all Christian philosophy students to get a copy and keep careful notes. Also, be sure to check out other writers from the same school, namely, Robert P George and John Finnis.

Published by Thriftbooks.com User , 15 years ago
I have read a number of books on the abortion issue (both pro/con), and this is certainly one of the best philosophical defenses of the pro-life position. Be warned: if you're looking for partisan ranting or emotional appeals--i.e. abortion is wrong because liberals are evil people, or because God said so, or because babies are cute--this is not that book. Purely philosophical. Well thought out, well written. Anyone wishing to discuss this issue beyond simple slogans should read this book. Highly recommended.

A philosophical weapon for the cause of life

Published by Thriftbooks.com User , 18 years ago
Finally, an absolute masterpiece of scholarship that sets us free from the political and philosophical rubbish of the past 3 decades. Lee gives us a pristine work of philosphical investigation and explanation. For those of us who are already Pro-Life, this book gives us a superb weapon in the fight against the culture of death that is America today. For the Pro-Murder (aka Pro-Choice) agenda, this book effectively refutes all their claims without appealing to religion or theology for support. As a student of Lee's, I have had the privilege of his philosophical expertise on a one-on-one basis and this book brings his sound insights to the rest of the world. Buy this book and read it today!

thorough defense of the pro-life position

Published by Thriftbooks.com User , 19 years ago
Dr Lee offers devastating criticism of the pro-choice position on abortion. The reviewer below is a sad and tragic example of the poor argumentation that is offered for being pro-choice. While acknowledging that the unborn is a human person, still she calls this person a "parasite", the same chilling term the Nazi propaganda film "The Eternal Jew" used to describe the Jewish population. One can only wonder how well this reviewer below read Dr. Lee's book, as he discusses abortion in the context of the life of the mother and sees it as justifiable in a sense of non-intentional taking of life based on a principle of double effect. Additionally, Dr Lee's points would do well to show these sorts of arguments below could be also used to justify infanticide, as all children rely on their parents bodies for "life-support" whether it be through breast feeding, the administering of medicine, etc. Child support laws force parents to make use of their bodies (like go to work and pay money) in ways the dead beat parent may not wish.Dr Lee does a fine job here of not only refuting this sort of emotional "run of the mill" argument below, but also the more sophisticated philosophical and scientific points brought forward by the pro-choice crowd. Included is a critique of the moral theory known as "consequentialism", a rebuttal of the famous "violinist argument", and a host of other very useful information. This is one of the top books on the market regarding presenting a persuasive rational argument for the prolife view.

An excellent defense of the pro-life position.

Published by Thriftbooks.com User , 22 years ago
"Abortion and Unborn Human Life" is quite simply one of the best philosophical defenses of the pro-life position. The book is impressive in its clarity, its complete avoidance of emotional rhetoric, and Lee's willingness to address the most sophisticated pro-choice arguments.Lee's book will be welcomed mainly by those who are interested in the _philosophical_ issues behind the abortion debate. There are no slogans, no sound-bites, no pictures of thumb-sucking foetuses here -- merely calm, rational argumentation. This is a refreshing change, and it is precisely what the abortion debate generally lacks. As a pro-choicer, I do think Lee's arguments are flawed. His arguments in favour of foetal personhood are particularly tendentious. Nevertheless, the book presents a formidable challenge to the pro-choice position, and interested parties owe it to themselves to read it.
Copyright © 2020 Thriftbooks.com Terms of Use | Privacy Policy | Do Not Sell My Personal Information | Accessibility Statement
ThriftBooks® and the ThriftBooks® logo are registered trademarks of Thrift Books Global, LLC