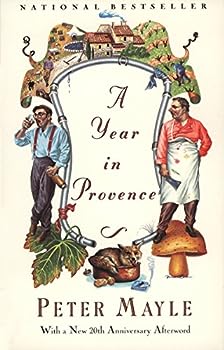 A Year in Provence

(Book #1 in the Provence Series)

National Bestseller In this witty and warm-hearted account, Peter Mayle tells what it is like to realize a long-cherished dream and actually move into a 200-year-old stone farmhouse in the remote... This description may be from another edition of this product.

Published by Thriftbooks.com User , 15 years ago
Peter Mayle created a genre with his first book set in Provence, France. He is a keen observer of human behavior, and when combined with his sense of humour, he writes wry accounts of of his exeriences renovating a house in the Luberon. This is a funny, enjoyable read, both rewarding in information and lighthearted in tone. I highly recommend it. Gordon Bitney,author of 'PROVENCE, je t'aime'.

AYear In Provence.....a Lifetime of Pleasure

Published by Thriftbooks.com User , 21 years ago
What is there left to say about this fine,uproriously funny novel. I happened upon it when it first came out at my local library, thought it looked mildly amusing and took it home,expecting to be fairly entertained...but little more!Since that fateful day I now have my own copy (hardbound, of course), have read this book, at last count, on five seperate occassions and have given away numerous copies to friends as gifts. Obviously, I am simply a HUGE fan of Mr. Mayle's novel. But it's difficult not to be! Whether the book is accurate or not,and there's been some discussion of that, I 've found his "innocent's abroad" story funny and touching in many ways. It's a common dream that many of us have which is to run away to your own private paradise and simply live your life as you would wish. Only of course things are never that simple...especially with the Mayle's challenge of working with French beauracracy,builder's and the odd assortment of neighbor's and on-lookers. To say nothing of the occassional uninvited house guests! There's simply something here for everyone! And of course, an odd moral to their touching story, which I won't explain here...I'll let you discover on your own. So pick up a favorite bottle of wine, some Edith Piaf and sit down with this wonderful novel. Once you're hooked you'll be able to enjoy the sequel as well..."Toujour's Provence"! Bonjoir!!

Published by Thriftbooks.com User , 22 years ago
I generally abhor travelogues, but this defies the genre and isn't really a travelogue per-se anyway. It describes a destination rather than a journey. Mayle and his wife arrive in Provence with full expectations of living la dolce vita and end up embroiled in a series of catastrophes that require them to reshape their entire characters and perform some serious attitude-adjusting. The English, like their American cousins, are accustomed to time and labor operating at peak efficiency. When someone tells us a job will be done in two weeks, we expect it done in 10 days. When we listen to weather reports, we want to know how long a particular pattern will last. We don't want to be told, "Maybe two days, maybe two weeks, maybe two months." As Mayle reports, things are done a bit differently in Provence. Time operates in a different dimension. If time is even considered, it is contemplated in terms of seasons, rather than hours, days, or weeks.Mayle's (and his wife's) adaptation to the Provencal lifestyle is sometimes painful, other times poignant and telling, but almost always extremely funny. He is a born raconteur, a master of the amusing anecdote, expert at rendering a farcical tableau. The cast of characters of A Year in Provence are priceless. He describes them vividly and each lends color to the overall impression of les Provencals that we eventually come away with. Mayle pokes gentle fun at them and obviously has warm feelings towards them, even his fox-eating neighbor, Massot. Every inhabitant of the region has a strong opinion on a variety of subjects, and these opinions are often at odds with those of their neighbors. About the only thing everyone agrees on is the importance of food. Mayle's decsriptions of his gastronomical forays are rendered so vividly that I have started combing the supermarket here in Pinehurst for ingredients (pale imitations for the most part, sadly). I was fortunate to find the unabridged tape of this book at my library. David Case did a great job at rendering the English disposition slowly succombing to the pace and timbre of Provencal life. Mayle is great company. I look forward to hearing more from him.

CAPTURES THE ESSENCE OF PROVENCE--PERFECT IN EVERY WAY

Published by Thriftbooks.com User , 23 years ago
I was born in and grew up in Provence. In this book, Peter Mayle does the seemingly impossible--he captures the essence of a place so perfectly the reader is almost transported. Far from being a travel book, A Year in Provence is a timeless classic, both beautifully written and hilariously funny. Mayle is a genius when it comes to Provence. His characters are lively and full of fun, the situations (e.g., German campers) real, and the tone of book so perfect it's a dream. Read it for enjoyment, read it to learn about Provence. Either way you will be entertained and you certainly can't go wrong.
Trustpilot
Copyright © 2022 Thriftbooks.com Terms of Use | Privacy Policy | Do Not Sell My Personal Information | Cookie Preferences | Accessibility Statement
ThriftBooks® and the ThriftBooks® logo are registered trademarks of Thrift Books Global, LLC