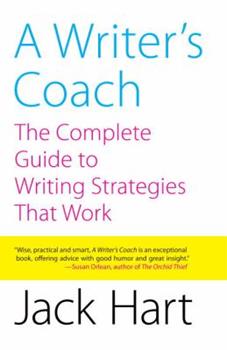 A Writer's Coach: The Complete Guide to Writing Strategies That Work

Mystified over misplaced modifiers? In a trance from intransitive verbs? Paralyzed from using the passive voice? To aid writers, from beginners to professionals, legendary writing coach Jack Hart presents a comprehensive, practical, step-by-step approach to the writing process. He shares his techniques for composing and sustaining powerful writing and demonstrates how to overcome the most common obstacles such as procrastination, writer's block, and...

For the Writer Ready to Move to the Next Level

Published by Thriftbooks.com User , 14 years ago
Books on writing often reiterate the same advice we learn over time, the reader sometimes lucks out in using a tidbit or two. Realistically, no one has time to study the advice and put it to practice. Thus, it's not a bad thing for a book on writing to cover the things we've read before. The more we read about it, the more it stinks in. But you can't read A Writer's Coach in the same way you read any other writing book. This one goes deeper meaning a reader may absorb the information better by reading one chapter at a time to understand and practice the concepts. Coaching an athlete to improve at something doesn't happen overnight. Thus, this book targets the serious writer who needs to move beyond the basic books on writing in order to take writing to the next level. I try to avoid writing general reviews that tell the reader nothing, but Hart is a master in explaining the concepts of method, process, structure, and everything else he covers. It's difficult to capture them into a little review when I try to avoid long reviews. Business and life coaching grows more popular because they're effective in helping people change behavior and improve. In thinking about coaches, I reflected on my childhood years when I played sports. The best coaches point out the right way to swing a bat, serve a volleyball, or shoot a basket. They also help players review their weaker moves so they can fix their form rather than let them continue using bad form, which will hurt them in the end. "Coach" is a fitting word in the title because Hart takes the coaching approach in showing the writer the right form for taking an idea from start to finish. The book speaks more to journalists and non-fiction writers. However, much advice works across all writing genres -- so those who thrive on telling stories can glean a few valuable lessons from Hart. Expect to find high quality content that you find in the best college textbooks -- except subtract the stiff and convoluted writing. Hart's writing style makes the reading easy. A Writer's Coach contains smart, clear and logical guidance that will take a writer's writing skills to the next level.

Invest in this one!

Published by Thriftbooks.com User , 15 years ago
Of all the writing guides out there, this one stands out for its balance between passion, precision and technique. You'll find some real gems tucked nonchalantly into the most unassuming paragraphs. Most helpful are the check-lists at the end of every chapter. As a novelist, I gleaned a lot of wisdom and encouragement from this book. If you want to build a library of master teaching, add to this Stephen King's On Writing, and Donald Maass' Writing the Break Out Novel. These three are spot on.

Published by Thriftbooks.com User , 15 years ago
Jack Hart is the managing editor at 'The Oregonian' and a frequent lecturer at Harvard University's prestigious 'Nieman Conference on Narrative Journalism'. In "A Writer's Coach: An Editor's Guide To Words That Work", Jack Hart draws upon his more than 30 years of experience and expertise to demystify the writing process and methodically present every step (and misstep) in the processes involved with putting down thoughts and information into print. Hart's emphasis is that good writing demonstrates energy, conciseness, personality, rhythm, clarity, as well as being 'mechanically correct'. "A Writer's Coach" is very highly recommended reading for all aspiring authors seeking to make writing stronger and more effective - be they novice beginners or seasoned experts.

Keeping words square with the world.

Published by Thriftbooks.com User , 15 years ago
Writing coach Jack Hart just published the best book about the craft of writing since William Zinsser's classic "On Writing Well." "A Writer's Coach: An Editor's Guide to Words that Work," comes at a good time. Bad books come out of printing houses, magazines disappear, and newspaper continue to commit slow suicide, writing about government infrastructure or "converting" to online under the theory that two-paragraph text information bursts are what readers desperately crave. (Actually, what readers crave is video, a lot more video than writers or newspapers are giving them...but fundamentally, with that video, what they really want are STORIES). Jack is a writer's editor who knows how to build great stories. Readers might want more video these days, but they have hungered for good stories since long before a blind Greek began to dictate the first chanting lines of the Iliad. The online world will figure this out, probably sooner rather than later, and when they do, the reading public will find good stories, video and text, all of them containing the same fundamentals that Homer used to create his masterpieces. There are 12 fundamentals, actually: Method, Process, Structure, Force, Brevity, Clarity, Rhythm, Humanity, Color, Voice, Mechanics, Mastery. Those are Hart's 12 chapter headings in "Writer's Coach, but they were the 12 tools of Homer and Aeschylus and Shakespeare and Orson Welles and Steven Spielberg and any storyteller who's ever captivated an audience. What appears underneath those simple chapter headings is some of the best instruction anyone could have about how to become a skilled writer, and Jack does it by bringing clarity to the most complex ideas One of the hardest writing concepts I ever tried to memorize, for example, is the "ladder of abstraction," the profound idea that all words exist on a continuum running from the absolutely concrete to the cosmically abstract. It's a valuable idea for a writer to memorize, and in the ten years since I encountered it I could never make it stick in my head, until I saw this in Jack's chapter called "Color." Here's a ladder anyone can grasp: LADDER OF ABSTRACTION: Everything there is Living things Vertebrates Humanity Americans American truck drivers Portland truck drivers Acme Freight truck drivers Fred Jack's book demystifies writing while deftly explaining the classic underpinnings of writing as classic art. As a newspaper editor he's edited two Pulitzer-prize-winning stories and contributed to a third; he`s long been known as one of the great coaches of writing in the country. In each chapter, he takes apart the mechanics of writing the way a gifted mechanic take apart a car, showing in an engaging way how each part works and how it all fits into a whole. For anyone like me who desperately wants to get better at writing, this is the book to have. The best part about this is that Jack lets loose the confide

Published by Thriftbooks.com User , 15 years ago
Books on writing are often too general to be of any use. That's the reason I rarely recommend writing books. In fact, the only two books that I've recommended are McKee's "Story" and Franklin's "Writing for Story." But now I've added another to my list: Jack Hart's "A Writer's Coach." Although aimed primarily at journalists (in the same way that, say, McKee is aimed at screenwriters), this book will be immensely useful to anyone who takes the writing craft seriously, no matter what they write. In fact, "A Writer's Coach" is an excellent companion to McKee and Franklin because it covers topics not covered by them. Hart's section on "color" alone is worth the price of the book (in it he explains the Ladder of Abstraction). But there are plenty of other useful topics/items as well, including the sections on endings, clarity, humanity, and the "Selected Resources for Writers" in the back. The book is well organized and easy to read/navigate. I've worked as a freelance writer since 1999, but this book taught me a few things that I didn't know. My plan was to read only a few pages every night before bed, but this book is so good I've been staying up half the night reading it! If you're a writer who is passionate about learning craft, buy this book.
Trustpilot
Copyright © 2022 Thriftbooks.com Terms of Use | Privacy Policy | Do Not Sell or Share My Personal Information | Accessibility Statement
ThriftBooks® and the ThriftBooks® logo are registered trademarks of Thrift Books Global, LLC