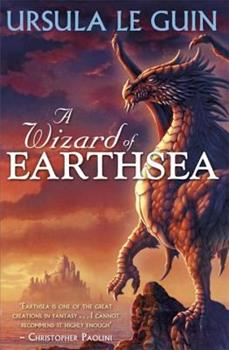 A Wizard of Earthsea.

(Book #1 in the Earthsea Cycle Series)

This description may be from another edition of this product. Originally published in 1968, Ursula K. Le Guin's A Wizard of Earthsea marks the first of the six now beloved Earthsea titles. Ged was the greatest sorcerer in Earthsea, but in his youth he was the...

Published by Thriftbooks.com User , 16 years ago
Ursula Le Guin made fantasy history with "A Wizard of Earthsea," a spare but strangely entrancing story about a young wizard coming of age. Despite a rather distant writing style, Le Guin's story is still a classic that is generally put on the same shelf as Lewis and Tolkien. Ged was born in a village in Earthsea -- a grouping of many, many small islands -- in Gont. The boy soon shows signs of great power, the ability to call animals and to laugh even when his tongue has been bound by a spell. A mage named Ogion apprentices Ged--who is known as Sparrowhawk, as knowledge of his true name would give anyone power over him. But Ogion's discipline and lessons are full of silence and self-examination, something which soon sends Ged to the school for mages in Roke. A rival finally mocks Ged into a magical duel, and a monstrous creature made of shadow attacks Ged, nearly killing him. But upon the completion of his studies, the now-wiser wizard sets off to an island to seek the Dragon of Pendor. As the shadow closes in on Ged and his life becomes increasingly imperiled, he must discern what -- and who -- it is, to make himself truly whole. Le Guin's book has a lot of things in it that tend to annoy readers -- several years are skipped in a few pages, and little of Ged's thoughts and emotions aside from "Ged felt this" and "Ged thought that" are revealed. But the spare mythic style and quiet philosophical bent add an extra dimension to a straightforward fantasy story. Le Guin's story spans several years in Ged's life, taking him from a little boy in a dirty village to a powerful and respected mage. But she also spins in Eastern philosophy, in the form of the "shadow" that stalks Ged for many years -- in some ways, the final explanation for what the shadow is seems fitting. Ged has the makings of a classic hero: he is talented and initially hot-headed, but through his misfortunes is tempered into a more selfless, albeit scarred person (both physically and emotionally). Most of the supporting characters don't appear long enough to get much development, although Ged's buddy Vetch comes across as a sweetheart. Ursula Le Guin's "Wizard of Earthsea" is a memorable story about a boy becoming a man, and a man coming to terms with himself. A unique story, and one worthy of being called a classic.

Published by Thriftbooks.com User , 18 years ago
Ursula K. LeGuin's "A Wizard of Earthsea" comes from a different place then the other two fantasists with whom her Earthsea trilogy is so often compared. Tolkein's so-called fantasy was a real attempt to capture what Tolkein believed the languagues lost before the beginnings of early English, while his Oxford colleague wrote his Narnia fantasies from a Christian viewpoint. LeGuin's fantasy novels derive from her background in anthropology and show it in every way. The story concerns the Wizard Sparrowhawk and his education. Sparrowhawk comes from a desperately poor village in the mountains, from among illiterate peasants (compare to the world of the hobbits, where, though illiterate, there is no squalor) who live with their goats. His home island, Gont, is the birthplace of Goatherds, Pirates, and Wizards, and from an early age Sparrowhawk shows his powers. After saving his village from an invading army, Sparrowhawk is apprenticed to Ogion, the great Mage. There Sparrowhawk begins to learn what Wizards know: the names of all things. He also is drawn to showing off, including calling up the dead. Too powerful and curious for Ogion, Sparrowhawk goes to the isle of Roke to attend the school there ( Rowling only stole from the best) and finds he's not only the best pupil, but he can make enemies. In a boast, he calls up a spirit and brings out a sort of un-him. The un-him scars Sparrowhawk and kills the school's Archmage who uses his power to try and undo what Sparrowhawk has done. Ged, Sparrowhawk's true name, must now pursue this unhim while fighting dragons, evil stones, and gibbeths, people the unhim have entered and destroyed. Finally, Ged turns on his pursuer to fight an epic battle on the unsea and reunite himself. LeGuin's spare prose is based on folktales, and myths, and Earthsea's theology of balance, true names, and magic is clear: Ged has disturbed the balance, so he must restore it. Like Tolkein's and Lewis' books, there is a sexual innocence here: Ged is a mage first and foremost: he feel attractions, but no lust. Of course, Heros of Myth are too good to be lustful; chastity preserves their power. Unlike the other fantasies, the Earthsea Trilogy is not England, but an actual mythical place, albeit medieval in a European sense. Ged is no Englishman either, being copper-colored. The deep understanding of what makes a culture a culture underlies everything LeGuin has written, from "The Dispossed" to "Terhanu." The intelligence behind these books is impressive, neither sentimental nor baroque, almost clinical in its portrayal of an premodern world where magic does work, and where every action has personal consequences and real pain.

Published by Thriftbooks.com User , 20 years ago
Ursula Le Guin is the daughter of Alfred Kroeber, an anthropologist, and Theodora Kroeber, a psychologist and writer. It's easy and accurate to say that her parents' interests inform her brilliant writing, and that cultural anthrpology and Jungian psychology are at the core of Wizard of Earthsea and its three sequels. But the book isn't a treatise. It's a wonderful, well-told story of a young man, Ged, coming of age in a world where words can have the power of magic and dragons are as real as earthquakes. There is nothing didactic about this story; Le Guin's writing is compelling and her characters are vivid: Ogion, the Mage of Silence, whose word had stilled an earthquake; Vetch, who helps Ged on a deadly quest for no reason but friendship; Murre, Vetch's sister; Yevaud, the dragon of Pendor; and Skiorh, possessed by a gebbeth. Earthsea doesn't exist in a vacuum. Le Guin constructs a deep and textured history, and her characters act in ways that are consistent with that world. She manages the trick of writing a mythic tale without falling into the traps and foibles of sounding like you are trying. The climax is straight from Carl Jung, but you don't need to know Carl Jung from Steve Young to appreciate it. From time to time, religious groups call for this book to be banned from school libraries, claiming it promotes witchcraft. Nonsense. This is a book every teenager should read. It speaks to self-understanding, nothing more. And some feminists criticize Le Guin because Ged is a male character. Again, nonsense, Ged is an archetype, and his gender matters not at all. This is an important book. It's also terrific fun. Highly recommended.

Jungian psychology at its best...

Published by Thriftbooks.com User , 21 years ago
Not only is the "Earthsea" trilogy a wonderful series for adolescents but it also contains profound wisdom for adults seeking their own path to individuation. Rich in timeless myth, the series has the young mage Ged surmount many trials on his way to understanding himself and therein lies the key to his ultimately becomming the Archmage of Roke. Each book in the series has the main story turn on the issue of trust between two people and upon Ged's courage in facing dark issues either within himself or in the enviroment. Ged is a powerful role for young people developing a sense of their inner integrity and for middle-agers every where beginning to deal with their shadow issues. Of course there are plenty of dragons, battles, transformations and journeys which can be enjoyed simply as a good storey, but don't pass up the chance to re-read to catch the deeper meaning. This series is too good to be eclipsed in popularity by LOTR and the Chornicles of Narnia, "Earthsea" stands on its own! If I haven't convinced you, please read the essay by Noel Perrin in his book, "A Child's Delight."

A brilliant book for everyone

Published by Thriftbooks.com User , 23 years ago
I first read this book two years ago when i was 22 and away on holiday with my fiance. It is one of his favourite books, and he has read the whole series time and again. I enjoy reading all types of literature, although science-fiction and fantasy books are my favourite. I have always favoured sci-fi, especially Asimov and Clarke, and my fiance fantasy, particularly Tolkien and Le Guin. This book, along with The Hobbit and Lord of the Rings, have made me as passionate about fantasy as sci-fi. The book works on many levels, as a good story, as escapism, as a gateway to an incredible fantasy land, and as something far deeper. The story is thought-provoking and compelling, rich and meaningful. The book examines how we consider ourselves and the world around us. What is our real self ? What are we capable of ? How do our actions influence the world around us ? How do the names that we apply to objects affect how we view and understand them ? A brilliant book that i would recommend to anyone of any age. I think its ridiculous that great literature such as this, The Hobbit, Lord of the Rings, Alice in Wonderland, C.S. Lewis, and so on get classified as "childrens books". They are books for everyone with imagination, who enjoys good story-telling, and interesting and unusual characters. They are tales which leave strong images for years after reading, which make you want to go back to read again and again, which offer something new each time they are read, which make you want to tell other people about them, which enthrall and inspire you, which leave you with plenty to think and talk about, and which push back the boundaries of your thoughts and imagination.
Copyright © 2020 Thriftbooks.com Terms of Use | Privacy Policy | Do Not Sell My Personal Information | Accessibility Statement
ThriftBooks® and the ThriftBooks® logo are registered trademarks of Thrift Books Global, LLC