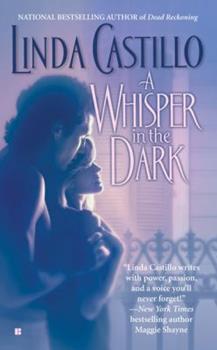 A Whisper in the Dark (Berkley Sensation)

"An author at the top of her game, (All About Romance) Linda Castillo has become renowned for her nail-biting novels of romantic suspense. Now she delivers an electrifying thriller about forbidden desire -and a secret that could mean one woman s demise . . . Until now, no one has suspected the truth about down-to-earth bookseller Julia Wainright. But the arrival of six threatening letters indicates someone has discovered her secret - and wants her...

Published by Thriftbooks.com User , 15 years ago
John Merrick quits the Chicago Police Department when he kills an undercover officer during a bust. Even though he is cleared by the Grand Jury and Internal Affairs, John is unable to forgive himself. He can no longer even bring himself to pick up his gun. Instead, he now picks up a bottle. When John receives a call from Benjamin Wainwright in New Orleans requesting help to catch a stalker, he wants to say no. Instead, he heads to New Orleans. Julia Wainwright owns and operates an antique bookstore. Ever since her literary erotica novel had been published a couple of months ago, she has been receiving threatening letters. The novel does not have her real name on it; it has her pseudonym, Elizabeth de Haviland. Only a few people even know that she is the author. Her father is certainly not one of those few! Her father, Benjamin, is about to be elected director of the Eternity Springs Ministries. Julia does not want her book to cause scandal for her dad. But someone knows and disapproves enough to stalk her. She finally agrees to let John Merrick help. The threats start to escalate quickly. Whoever it is, the stalker is able to get into her store and her home, which is above the book store. The stalker seems to know everything about her and those around her. As the violence gets worse, Julia and John must learn to trust each other before it is too late. ***** This romantic suspense will give you cold chills. Though romance blooms later on within the pages of this tale, the suspense begins from the opening page. I found myself divided between the horror that torments John's past, as well as, from the fear and insecurity Julia feels from the stalker. Fantastic! ***** Reviewed by Detra Fitch of Huntress Reviews.

Published by Thriftbooks.com User , 15 years ago
Julia Wainwright is an antique book dealer as well as published writer. She is also a victim of a stalker who is getting bolder with the types of letters he is leaving behind. The last in a series has been hand delivered. So when she sees John Merrick on her doorstep as a favor to her father she is torn. Years ago she had a crush on this handsome man. He has returned home after an officer involved shooting takes the life of a DEA agent. John has given up his badge and a lot of other things. But perhaps the danger chasing Julia is going to be enough to snap him out of his downwardly spiraling life. Can he be the hero she needs? Ms. Castillo has penned an edge of your seat romantic suspense with plenty of action accompanied by well developed characters. Still the one thing that kept this from being a story I could totally loose myself in was the more than realistic portrayal of John's downward spiral into a bottle. Although she was fair with her descriptions it made it difficult to see him in the role of "hero." Almost too graphic for a read you want to loose yourself in. Despite this one element of the story I found this to be vividly descriptive story as far as location and tension regarding our elusive stalker. This is the first time I've been able to read Ms. Castillo and it won't be my last. For CK2S Kwips and Kritiques

Published by Thriftbooks.com User , 15 years ago
Linda Castillo has become one of my very favorite authors in recent years. While I did enjoy Whisper in the Dark, I didn't love it. It didn't seem up to par with previous books. John Merrick is tortured ex-Detective. After shooting a DEA agent in a drug bust gone bad, he turns to the bottle. It seems that gin is the only thing that helps him dull the memory of having a man die in his arms. When an old friend calls in a favor, John heads home to New Orleans. Julia Wainwright's pride and joy is her antique bookshop. When she starts receiving strange notes which refer to a book she wrote under a pseudonym, she realizes that she has a crazy stalker on her hands. When her father brings in John Merrick, Julia doesn't have much hope that John can do much to help her. I did enjoy this book. Even though John is a good guy deep down, he did not seem like hero material. He is drunk almost every night, walks out on Julia several times, and she still falls in love with him? Even though Julia knew him from her childhood, she was only a child. So if she's falling in love based off her memories of him, that's just ewwww. I had high expectations going in, which is why I was dissapointed. You may not be, so I urge you to try it.

Published by Thriftbooks.com User , 15 years ago
John Merrick was a career cop, a good cop until one fateful night when he accidentally killed a fellow officer. The horror of that mistake overwhelmed him and he turned in his badge, left Chicago for his hometown of New Orleans and turned to a bottle for solace to help him forget the horrifying images of a fellow cop dying in his arms. Julia Wainwright had long ago gotten over her schoolgirl crush for John Merrick. She had since become a very private and independent woman, an antiquarian bookseller by day and secret author by night. Lately she had become the target of threatening letters that led her to believe someone knew of her alter ego. As a favor to her father, John had been talked into looking into the matter to discover Julia's stalker. John's intention had been to offer a quick security check then turn the whole business over to someone else -anyone else but him. Though when he discovered Julia `all grown up' with gypsy blue eyes and a body fashioned for sin, turning the case over to someone else would no longer be an option. *** The suspense of this well-written story was top-notch filled with an intriguing plot, plenty of vividly described action scenes that kept you turning the pages. The character definition was superior as well, so much so that this reader had no trouble becoming invested in the outcome of the mystery. However, with this said, I will also state that John Merrick was a not hero that I would have envisioned as a leading man and not one I could ever fall in love with. No matter the trauma, witnessing a man's journey to the bottom of a bottle is not romantic especially when it is so vividly portrayed. Obviously this is a catch 22 situation for an author when they can make the reader visualize the downside of a character's personality. Consequently, I didn't get a feel so much for romance between the two protagonists as a heavy dose of sensual lust. On the plus side, the stalker was drawn as a certifiably crazed madman and the author created situations that delivered edge of the seat imagery that are not for the faint of heart. Bottom line is you will be emotionally involved in this excellent thriller that should keep fans of Castillo coming back for more. Marilyn Rondeau, RIO - Reviewers International Organization

Published by Thriftbooks.com User , 15 years ago
Julia Wainwright has been living a secret life. The preacher's daughter/bookseller is also an author of romantica, hiding this fact from the world, especially her father, under a pen name. However, it appears someone knows her secret and is making her life a living terror as a result. Frightening notes and incidents prompt her father to hire ex-cop John Merrick to protect his daughter. John lost his career when he accidentally killed an undercover agent, not realizing he was one of the good guys. Since then, he has been drinking too much and is terrified of guns. Yet, his instincts are still good, and he does appear to be the best man for the job, and for Julia, as her books come to life between them. John made a mistake once that cost a life, will he make one again? Is he too damaged for Julia to risk her life and heart? **** Edgy suspense and romance make the pages of this book fly. There is no way to guess the surprise ending. John is an interesting hero, a damaged soul, far from the romantic hero perfection that is standard. His grittiness hides gold. This is a winner. **** Reviewed by Amanda Killgore for Huntress Reviews.
Copyright © 2020 Thriftbooks.com Terms of Use | Privacy Policy | Do Not Sell My Personal Information | Accessibility Statement
ThriftBooks® and the ThriftBooks® logo are registered trademarks of Thrift Books Global, LLC