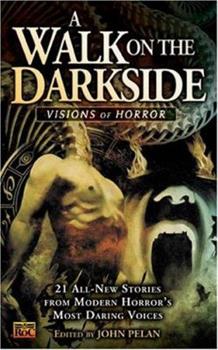 A Walk on the Darkside: Visions of Horror

(Book #3 in the Darkside Series)

Take a walk on the dark side 21 all-new horror stories from Caitl?n R. Kiernan, Brian Hodge, Tim Lebbon and more

This series gets better with each new volume

Published by Thriftbooks.com User , 15 years ago
John Pelan's third "Dark" anthology proves as well conceived and orchestrated as his first two related efforts, 1998's The Dark Side: Horror For The Next Millennium, and 2002's The Darker Side: Generations of Horror. In fact, in terms of overall quality, it betters its predecessors. Once again, he's included a number of tales from many lesser known, but quality authors. In this category are folks like Don Tumasonis ("Crossroads"), Joseph A. Ezzo ("Jikininki"), and Mark Samuels ("The Vanishing Point"), whose works open the volume. Of course, Pelan isn't one to ignore a good story just because it comes from a more seasoned author, proven by his inclusion of stories from Michael Shea ("Incident Report"), Brian Keene ("`The King' in YELLOW"), Caitlin Kiernan ("La Mer Des Reves") and the always dependable Steve Rasnic Tem, whose "An Ending" provides a strong finish to the anthology. Not to take away from the earlier entries, but it seems as if Pelan was acutely aware of the strength of his stable of stories, as each successive tale proved just a bit stronger than the one it followed. If anything's missing from this volume, it's editorial content. Perhaps choosing to err on the side of including as much fiction as possible, Pelan has neglected to include an Introduction or Afterward, or even notes on his stable of authors. The lack of author notes is a shame, especially in the case of newer writers, as readers intrigued by the work they've read here have no ready leads as to where to sample more.

Published by Thriftbooks.com User , 16 years ago
John Pelan is known for enjoying the bloodier side of horror, not only with the Darkside series of anthologies but also his Splatterpunk books. A Walk on the Darkside fits right in with this gorey tradition. Over 21 stories written by some of the industries best, we see all the dark, twisted sides of humanity. Like so many anthologies, many of the stories are average, with about five of them being spectacular, and about four that were really poorly done. Even the worst story still isn't that bad, though, and the rest keep the pages turning quickly. " Something in the Air" by Michael Laimo is my far and away favorite, and well worth checking out. Eerie and haunting, this story stuck with me well after I was done reading it. " Fairy Fort" by Peadar O' Guilin is a dark and disturbing look at the wee folk and being careful for what you wish for. It's also well worth reading. Over all, this is a good solid anthology and a worthy addition to any horror and/or anthology collection. Recommended.

Published by Thriftbooks.com User , 17 years ago
Not a bad tale in the bunch (a rarity for an anthology).

A Step Up From Generations of Horror

Published by Thriftbooks.com User , 17 years ago
Now this is good horror. The stories are several steps (maybe FLIGHTS) up from Generations of Horror. More mature, scary stories. Once again, though, the stories get better as you get further in the book. My personal favorites are "Fairy Fort," "Shoes," and "The Abandoned." I still didn't like Pelan's heavy dialogue, but the story was much better than the previous one in Generations. In journal entry form, it read much smoother. Pick this one instead of Generations.

Published by Thriftbooks.com User , 17 years ago
Pelan has put together a solid collection of both old favorites and hot new stars.
Copyright © 2022 Thriftbooks.com Terms of Use | Privacy Policy | Do Not Sell My Personal Information | Accessibility Statement
ThriftBooks® and the ThriftBooks® logo are registered trademarks of Thrift Books Global, LLC