A Walk in the Woods: Rediscovering America on the Appalachian Trail

(Book #2 in the Bryson and Katz Series)

A laugh-out-loud account of an outrageously rugged hike--by the beloved comic author of Lost Continent and Notes from a Small Island. Published in the 75th anniversary year of the Appalachian Trail. Father's Day merchandising.

A hilarious walk down the Appalachian trail

Published by Thriftbooks.com User , 4 years ago
Not 10 minutes into the book I was laughing. He writes in everyday language so you can put yourself in his shoes.I hope the rest of his books make me laugh as much as this one has.

Published by Thriftbooks.com User , 15 years ago
I don't remember when I've read a book that I enjoyed more - especially non-fiction. It is laugh out loud funny, and informative with excellent descriptions of the AT. I absolutely recommend this book.

More than a hiking narative.

Published by Thriftbooks.com User , 22 years ago
This is much more than a travelogue of two neophyte hikers on the Appalachian Trail, and readers looking for a blow by blow account of the travails of Bill Bryson and his companion, Stephen Katz, will be disappointed. Hiking provides only a backdrop to a heartfelt discourse on the social condition of America, local history, the environment, and the complexities of friendship. The pretext for the book was Bryson's return to the United States after twenty years in Britain, and his interest in "rediscovering America" after such a lengthy absence.The vast majority of the reviews of the book cite its hilarity (one reviewer called it "choke-on-your-coffee funny"), and indeed there are very many funny parts. However, the deeper I got into the book, I detected a strong shift in the author's sentiment from satire to deep introspection. His observations became more acute, more angry, and more individualized as his long hike constantly brings to his mind the fragile environment of the Trail, the insanity of bureacrats entrusted with the AT, and his own personal limitations.This was my first encounter with Bill Bryson, and while I found him entertaining, a beautiful writer, and an astute observer, some readers will be put off my his sharp satiric wit. It is certain that he will offend somebody. A friend of mine, who also read the book, was very much upset by the fact that Bryson and Katz didn't hike all 2,200 miles of the Trail, and that somehow their "failure" should prevent the telling of the story. This is utter nonsense and just throws more manure onto the present dung heap that has accumulated from the participants involved in peak bagging, wilderness races, and experiential therapy groups.Bryson and Katz at least tried to hike the entire AT, and they returned from their hike as changed men who learned many lessons about the wilderness and friendship. Towards the end of the book, the two men are talking about the hike. When Katz remarks that "we did it," Bryson reminds him that they didn't even see Mount Katahdin, much less climb it. Katz says, "Another mountain. How many do you need to see, Bryson?" I agree with Katz (and ultimately Bryson). They hiked the Appalachian Trail.

Published by Thriftbooks.com User , 23 years ago
Very seldom do I read anything that makes me laugh out loud. To do so more than once or twice in a single book almost never happens. With "Walk," I became almost hysterical over certain chapters - in an airport, no less, while waiting for my flight. People must have thought I was nuts! Anyway, this is the story of two middle-aged and out of shape men (Bryson and his buddy, Katz) who decide to hike the Appalachian Trail. The AT is the third longest nature trail in the US, stretching from Georgia to Maine, along some incredibly rough terrain. Not all of their journey is rustic, however, as they often take a break to spend a night in the closest little town off the trail to have a shower, sleep in a "real" bed, and wash the grime from their clothes. It is during one such trip to the laundromat that Katz has a rather interesting encounter with 300 lb. Beaulah, her extra-large-sized panties, and a washing machine. Aside from the comical adventures, Bryson also has a great deal to say about the AT itself, and in particular, how much the National Parks Service needs a giant kick in the pants to help preserve these Trails.

You will LOVE this book!

Published by Thriftbooks.com User , 23 years ago
Fair Warning -- do not read this book while commuting - you will be laughing so uncontrolably you will risk being committed by your fellow commuters. I have loaned this book to 3 friends - in each case, the spouse was so intrigued by the constant belly laughs that they also read the book before returning it. One friend bought copies for Christmas presents. The appeal is that universal. I dare say even those with no interest in backpacking or the Appalachian Trail would find the book highly entertaining.

A Walk in the Woods: Rediscovering America on the Appalachian Trail Mentions in Our Blog 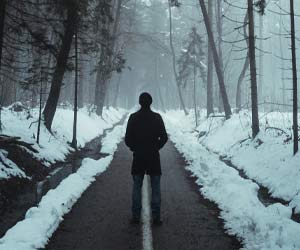 Our current circumstances have a lot of people talking about the Nordic tradition known as friluftsliv (pronounced free-loofts-liv). Translated as open air life, it is the idea of spending as much time outdoors as possible, no matter the weather. So get on out there!

Love Thyself
Published by Ashly Moore Sheldon • May 15, 2019
Your needs matter! Many of us suffer from the belief that taking time for self-care is indulgent. But we can't care for others if our own needs aren't being met.
Read Article
Trustpilot
Copyright © 2022 Thriftbooks.com Terms of Use | Privacy Policy | Do Not Sell My Personal Information | Cookie Preferences | Accessibility Statement
ThriftBooks® and the ThriftBooks® logo are registered trademarks of Thrift Books Global, LLC