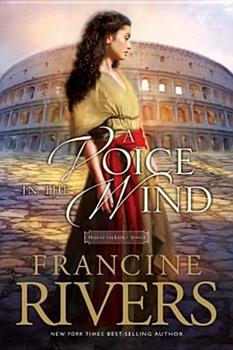 A Voice in the Wind

(Book #1 in the Mark of the Lion Series)

This classic series has inspired nearly 2 million readers. Both loyal fans and new readers will want the latest edition of this beloved series. This edition includes a foreword from the publisher, a preface from Francine Rivers and discussion questions suitable for personal and group use. #1 A Voice in the Wind: This first book in the classic best-selling Mark of the Lion series brings readers back to the first century and introduces them to a character...

A voice in the wind is my favorite out ot the Mark ot the Lion series.

Published by Adeola , 2 years ago
This is the 3rd time am reading this book, and each time I read, i have different encounters, the character Hadassah has inspired my faith and changed the way I perceive God and myself. I can't be tired of reading this book. It's a masterpiece. Thus book is good for children and adults, it strengths our walk with God and unshaken faith in His power. Thank you Francine Rivers.

Published by Thriftbooks.com User , 21 years ago
In a short time Francine Rivers has become one of our finest Christian authors, and THE MARK OF THE LION trilogy is her crown jewel. Quite simply, these are my favorite works of fiction - ever. While other authors may sell more books at times, none can WRITE like Rivers.The trilogy is set in the Roman Empire, shortly after the fall of Jerusalem. Using a Hebrew slave girl (Hadassah) and a German gladiator (Atretes; think the movie Gladiator) as the main characters, three books are crafted around themes of faith, redemption and sacrifice. Rivers is one of the best at writing characters and the ones she creates here are absolutely convincing -- flawed and heroic on multiple layers, with developmental conflicts that relate to and parallel modern times almost seemlessly. A VOICE IN THE WIND, the first and best of the series, lays the groundwork for the trilogy but stands tall on its own merits as well. The character of Hadassah, in particular, shines most bright in this part of the trilogy. You can read it on its own, but I guarantee that you will have to order the rest of the series when you're through. These books will not only grab hold of you and demand to be finished but they will challenge you to take your walk with God to a much deeper level. Do not read this series unless you want to be changed. No other stories have every affected me in such a deep way. Forget the LEFT BEHIND series and invest in a true Christian classic. Five Stars.

Published by Thriftbooks.com User , 22 years ago
In this first volume of the Mark of the Lion series, Francine Rivers spins a spell-binding and deeply-moving story that entertains, educates and enthrals. The captivating tale of the Christian Jewess Hadassah took me on a breath-taking ride that starts in the ruins of Jerusalem, travels to the godless hub of first century Rome, and concludes in the Artemis worshipping city of Ephesus. This book has the capacity not only to keep you captivated for as long as it takes to read (500 pages plus!), but long afterwards also. Rivers' story-telling capabilities are simply superb, as is her colourful characterization, and these are unquestionably some of the highlights of this novel. Particularly compelling is the touching manner in which Rivers portrays the special relationship between the slave Hadassah and her master Julia, and I gained valuable insights and understanding about slavery from this relationship. Rivers' theological weaknesses (endorsement of Arminianism and belief in ongoing revelation outside of Scripture) are evident, but only occur incidentally, and do not really detract from the power of the novel.Her portrayal of first century Rome is especially outstanding. The culture of the Roman empire is described in vivid detail, complete with its godless and decadent lifestyle, political intrigue and corruption, infatuation with gladiators and games, sex and sensuality. The description of Rome's decadence is at times almost too vivid, and consequently the book is not really suitable for younger readers. The inclusion of contemporary issues such as abortion, homosexuality, and common-law marriage at first seem anachronistic, but I soon realized that the decay evident in contemporary Western culture is merely a mirror image of the decay that also characterized and eventually destroyed corrupt Rome. Over against the destructive decay of Roman culture, Rivers describes its counter-culture: Christianity. The only hope for a people trapped in a immoral and disintegrating world - both then and now - is the Saviour and restorer of life: Jesus Christ. Ultimately this age-old contrast between the church and the world is at the heart of this epic novel. As never before, I was able to picture and appreciate the extent to which the Christians of the early church were counter-culture in first century pagan Rome. This renewed understanding of Christianity being counter-culture quickly became a personal incentive to be a faithful Christian in our equally corrupt times. It is especially this quality that made "A Voice in the Wind" not only immensely satisfying, but also incredibly stimulating for my own faith. This novel is not just good, it's great, and is undoubtedly one of the very best in contemporary Christian fiction. Very highly recommended!

Voice In The Wind - Fantastic!

Published by Thriftbooks.com User , 22 years ago
I borrowed this book from my elder sister while on holiday. I was so astounded by the characters and how easily they were to identify with! To start with, the book chronicles the start of a trilogy about a young Christian slave girl sold into a Roman family. There she finds herself clinging to a faith she took for granted and finding joy, peace of mind and a strong steadfastness in the Lord despite her circumstances. Fall in love with Marcus, rave against Julia and find yourself in awe of the power of the Lord. Rome in those days was not so different from now - extremes of poverty and wealth accompanied by greed, enterprise and the emptiness found in material things. I was so affected by this book that I took down the title, author and publisher's name so that I could order my own copy plus the next 2 in the series, An Echo In the Darkness and As Sure As the Dawn. As soon as these books came through the post, I stayed in my room till I'd finished reading them - there was no way I was leaving my room till I'd finished! Later, I ordered The Scarlet Thread and decided there was simply no point in looking for a better fiction/scripture writer than Francine Rivers. FR, you're brilliant - don't change!
Trustpilot
Copyright © 2022 Thriftbooks.com Terms of Use | Privacy Policy | Do Not Sell or Share My Personal Information | Accessibility Statement
ThriftBooks® and the ThriftBooks® logo are registered trademarks of Thrift Books Global, LLC