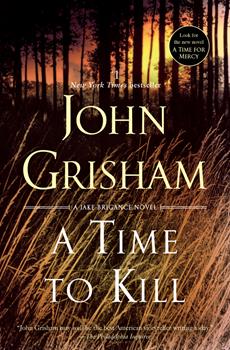 A Time to Kill: A Jake Brigance Novel

(Book #1 in the Jake Brigance Series)

#1 NEW YORK TIMES BESTSELLER - The master of the legal thriller probes the savage depths of racial violence in this searing courtroom drama featuring the beloved Jake Brigance. "John Grisham may well be the best American storyteller writing today."--The Philadelphia InquirerThe life of a ten-year-old black girl is shattered by two drunken and remorseless white men. The mostly white town of Clanton in Ford County, Mississippi, reacts with shock and...

A time to enjoy!

Published by Horror crazy , 5 months ago
What inspired me to read John Grisham’s first book, A Time to Kill, was that I had seen and enjoyed the movie, plus I had read others by him by the time I bought A Time to Kill, and I also enjoyed those books. A Time to Kill seems much more like a drama than a thriller to me, but however you look at it, it’s a great book! You know the plot if you have ever even heard of the book OR the movie: A black man kills two young white men in a courthouse because they raped and tortured his little girl and he fears that they will get away with it. He then asks a young lawyer, who happens to be his friend, to defend him in court. I might find a drama when I read the book or watch the movie, but the book has plenty of drama, tension, and terror, especially considering that the Ku Klux Klan is involved in the proceedings. This is not just a book about the moral question of whether we should take the law into our own hands; it’s also a story of racial tensions. In a racially divided small town, many are furious about the actions of Carl Lee, the angry father and killer on trial, but this is partly because he is black. And the townspeople are just as outraged by Jake Brigance, his lawyer, because Jake is white. Should racism be allowed to interfere with a criminal trial? Is it ever okay for anyone to kill just to prevent criminals who attacked them or their loved ones from being acquitted? John Grisham does an incredible job of asking, and approaching these questions with his fantastic first book! An enjoyable book, more skillfully and professionally written than you might expect from any author’s debut, that not only entertains, but makes readers think. If it’s what you want from a book, A Time to Kill is a masterpiece that you’ll have a time to enjoy, hopefully a lot of time! And you should look for the sequels, Sycamore Row and A Time for Mercy. I have not yet read them, but I happily own paperback editions of both books and I’m looking forward to reading them!

1st John Grisham Read and I LOVED IT!

Published by Kristin , 1 year ago
Let me start by saying, WOW. This was my first John Grisham book and I am impressed. A very heavy read with many emotional triggers; a story of retribution and justice. It really begs the question of vigilante justice--can one take actions into their own hands versus letting the judicial system play out? Does anyone have the right to take another life no matter the reasoning/logic behind it? Unfortunately, during the time-period that this story took place (and sadly, still today), our black communities are vastly discriminated against and rarely get the justice they deserve. I have to admit, I was proud of Carl Lee for wanting to protect his little girl. Would recommend this book

Published by Thriftbooks.com User , 17 years ago
I'm sure you've read the story synopsis, so I won't bore you with it. So why did I give it 5 stars? In short, it's a legal thriller at its best. The main character, Jake Brigance - defense lawyer for Carl Lee Hailey, is hardly endearing - he's openly hateful towards his secretary, lies to his wife, submits to the temptation of alcohol when the heat comes down. However, in reality, it makes the character more real - nobody's perfect, everyone has their dark sides. Sure, he's hounding after the publicity at first, but he also comes to care about the fate of his client, and while he flirts with his law clerk (always got a chuckle out of "Row Ark") he doesn't submit to THAT temptation and stays true to his wife. The topic is interesting - how the law should treat a vigilante killer. Yet deeper than that is the fundamental question of equality of treatment between whites and blacks in the law. Yes, the law itself holds all people as equal, but it's the eyes of the 12 jury members that really determines the guilt or innocence of a person. The characters are well crafted - not all likeable, but at least, for the most part, believable. The pace of the story nicely snowballs - adding in essential tension with the addition of the Klu Klux Klan's involvement in the proceedings. So it certainly deserves the 5 stars and I thoroughly recommend it it anyone (which is more than I can say for the movie adaptation, but that's another story!)

Review for "A Time to Kill"

Published by Thriftbooks.com User , 21 years ago
"A Time To Kill" was written in the middle 1980's by John Grisham, but was set in the small town of Clanton, Mississippi, on the late 1970's. Jake Brigance, the protagonist, is a lawyer who is trying to win a case that can help his career while at the same time endangers himself, his family, and any other people invovled with the case. The case involves a black man, Carl Lee Hailey, who violently took the law into his own hands by murdering his ten-year-old daughter's two white rapists. The entire town has their own opinions of the black man killing the two white men and of Jake because he took Mr. Hailey's case. The town of Clanton versus racism is one of the conflicts of this novel. Racism is the antagonist against Jake and the angered father that sought revenge for his daughter's pain. The themes are that although people think racism is a thing of the past, it is still alive in some people and very dangerous. Another theme is that when the law is taken into your own hands, it may seem like the best and possibly even the only solution at the time. However, when it is all said and done, it may not be the best way to solve your problem after all. This book was amazingly well written to be the first novel of a new writter. I really liked it and would recommend it to anyone who enjoys to read.

A fast and entertaining read

Published by Thriftbooks.com User , 22 years ago
"A Time to Kill" is John Grisham's first novel, but unless you read the foreword, it's not readily apparent. His fluid, detailed storytelling is unlike the choppy first attempts of many modern authors. (At times it may seem he pays *too* much attention to details, but after all, he *is* a lawyer.)In a small town in the Deep South, two redneck hooligans rape and maim a ten-year-old black girl. Enraged, the girl's father, Carl Lee Hailey, takes justice into his own hands, killing the two rapists in a courthouse shooting. He seeks the help of defense lawyer Jake Brigance to save him from the gas chamber. Brigance, a young but sharp lawyer, has to find a way to win an impossible case: a black man is on trial for killing two white men, and his case is being heard by an all-white jury. Adding to the mix are violence between the Ku Klux Klan and the black community, and the fact that, during the shooting, Carl Lee had injured a sheriff's deputy (who later had to have part of his leg amputated). Throughout the book, the odds stack against Brigance and his client, and the novel will definitely keep you turning the pages. No matter what your personal opinions on the death penalty or vigilante justice are, you won't be disappointed. As Jake's mentor, disbarred lawyer Lucien Wilbanks, says, "If you win this case, justice will prevail, but if you lose it, justice will also prevail."

One of the best books i've read

Published by Thriftbooks.com User , 24 years ago
Grisham's a real author. One of the best. The real life drama, excites. It took two days to read it.

Published by Thriftbooks.com User , 26 years ago
Finally, A Time to Kill, John Grisham's first novel, is a feature length movie. I just read this book, but I knew it was realeased in 1989. I'm only thirteen, and this was my first Grisham book. In this story, Grisham hits us with a subject that most might not like to discuss: child rape. Ten-year old Tonya Hailey is brutally raped and almost killed by two drunken rednecks; perhaps the saddest and hardest part to get through with the addition of little Tonya's dream of her father running to get her. After this horrid crime is committed, Tonya's father, Carl Lee exacts vengeance on the two rednecks, and kills them. He is put on trial, and lawyer Jake Brigance is introduced to us. He takes Carl Lee's case and must face his hated enemy, Rufus Buckley, in court. The days leading to the trial are filled with KKK threats, riots between blacks and the KKK, and several other chills and spills. Finally, the trial comes and the small town of Clanton, where the trial is held, is occupated by journalists, soldiers, KKK members, and thousands of blacks, as they all wait for the verdict on the edge of their seats..
Trustpilot
Copyright © 2022 Thriftbooks.com Terms of Use | Privacy Policy | Do Not Sell or Share My Personal Information | Accessibility Statement
ThriftBooks® and the ThriftBooks® logo are registered trademarks of Thrift Books Global, LLC