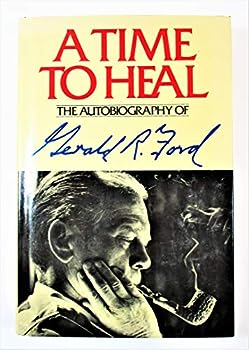 A Time to Heal: The Autobiography of Gerald R. Ford

A Time to Heal: The Autobiography of Gerald R. Ford This description may be from another edition of this product.

Published by Randy , 3 years ago
I had read this book but over the years had lost it. Now I have it in my collection again, and it is in great shape.

The Reflections of an Underrated President

Published by Thriftbooks.com User , 17 years ago
I think that this book was sorely needed to clear up a ridiculous misconception that Gerald Ford was an incompetent who was not up to being President. Instead (and I think this book resolves this nicely), Ford worked very hard to steer the nation through very turbulent waters, and I think that he did a decent job, all things considered. The man never received a national mandate. Also, he had to deal with a heavily Democratic Congress (especially after the 1974 elections) that was approaching him with the sharpest of daggers drawn. Finally, he had to make a politically difficult decision in pardoning Richard Nixon (necessary, in my view, to move the nation away from the divisive maelstrom that was Watergate).

How a King became a Ford and a non-elected President

Published by Thriftbooks.com User , 18 years ago
I have a pet theory that the first vote you cast for the office of President of the United States is key to how you will vote for the rest of your life. In other words, every vote is an extension of or a reaction to that original vote. I case my first vote in 1976 for Gerald R. Ford and the key factor was that here was a man who had not run for president. Selected by Richard Nixon and the Congress of the United States to replaced Spiro Agnew as Vice President, Ford assumed the presidency when Nixon resigned because of the Watergate cover up. Consequently, there has always been part of me that has wanted to disqualify everybody who wants to be president. Granted, it makes it impossible to vote for anybody, but I still think on some level that if you want to be president you should not be allowed to hold the office (However, this is not as far-fetched as it sounds: the current occupant of the White House did not want to be president, but rather Commissioner of Baseball). Gerald Rudolph Ford, the 38th President of the United States, was actually born Leslie Lynch King, Jr., but his parents separated two weeks after his birth and when his mother married Gerald R. Ford, a paint salesman in Grand Rapids, Michigan, they changed the boy's name and we avoided having a King become President. Ford tells the story of his life in simple and rather unembellished terms. When he was 17 he had a chance meeting with his biological father apparently devoid of sentiment or significance. How he relates the incident is representative of the way that Ford presents his life's story, with restraint and without tooting his own horn. The things for which he has been honored throughout his life, from being an All-American football player at the University of Michigan to being honored by President Jimmy Carter in his inaugural address for all he had done to heal the nation in the wake of Watergate, are taken in stride. Consequently, "A Time to Heal: The Autobiography of Gerald R. Ford" is as much a testament to the man's character as it is a memoir of his life in and out of politics. Ford covers the major episodes of his life, growing up in Michigan, being an Eagle Scout, playing at Michigan and turning down offers to play professional football to attend Yale Law School instead. During World War II Ford served in the Navy on the U.S.S. Monterey, a light aircraft carrier. After the war he practiced law and then won a seat in the U.S. House of Representatives in 1948. It was during that campaign that he married Elizabeth Ann Bloomer Warren. Ford was re-elected to Congress a dozen times, always getting over 60% of the vote. Rejecting opportunities to run for the Senate or the Michigan governorship, Ford's ambition was to become Speaker of the House. He described himself as "a moderate in domestic affairs, an internationalist in foreign affairs, and a conservative in fiscal policy," and was considered a "reform" Republican. What becomes interesting in looking

The Luckiest (or Unluckiest) Guy in American History

Published by Thriftbooks.com User , 21 years ago
Because Gerald Ford was a President about whom I knew nothing, I figured I'd do a little reading on the man. For better or worse, I've started with his own memoirs. Conscious of the fact that all former Presidents use their memoirs to make themselves look like the best leader we've ever had, I have to say that Ford's were the best I've read. Superficially, his writing style flows very well and he seems to cover all the bases. In terms of content, the book is very well written, although Ford lays out his administration like a laundry list of events and his responses to them. I definitely want to know more about the emotions he must have been feeling when he was named as VP and then as President, during the Nixon pardon crisis, and during his bid for election (I almost wrote reelection!). What impresses me about Ford is that he considered himself to be just as presidential as any of his predecessors, despite the fact that he had never been elected by the American people as even VP, and, perhaps even worse, he was named VP by Nixon after Spiro Agnew resigned in shame and the Nixon administration itself had begun falling apart. I think history will look upon Gerald Ford very favorably, for the courage he exercised in pardoning Nixon and in accepting this awesome responsibility in such a bizarre situation. I also think it's high time someone wrote a definitive biography of Ford, as he unfortunately will not be around for much longer, and his passing will surely raise calls for a look back at this courageous man.

A Seat in the Family Room of the White House

Published by Thriftbooks.com User , 22 years ago
A Time to Heal by Gerald R. Ford provides a very frank and open view into the one-time First Family of America. The first 123 pages provides Ford's life story until he enters the presidency. The remainder of the book covers the Ford Administration. For one who lived through the Ford years, the book provides a reminder of the key stories of the day as well as their presentation from the Presidential perspective. One of the most endearing features of this book is President Ford's candor. In commenting on events and personalities with which he was involved he is not constrained by an aversion to giving offense. Some of his comments are more in the nature of what one would expect to hear in your own family room, rather than in the autobiography of a national politician. Illustrative of such snippets are his reaction when he heard of Spiro Agnew being tapped for Vice-President ("I shook my head in disbelief.") and his reaction to Nixon's resignation speech: "at the end I was convinced that Nixon was out of touch with reality. The fact that he was linking his resignation to the loss of his Congressional base shocked me and disturbs me still." My one disappointment in this book is the sparse treatment of his Congressional career. One would think that Ford's long service in the House and years as minority leader would provide a basis for a book of its own. He could have provided a valuable insight into some of the major legislative battles of the fifties through the early seventies. He chose, however, only to mention those incidents which were of particular importance to his family life or career. Overall, A Time To Heal is a very interesting book which is well worth the reading.

Published by Thriftbooks.com User , 24 years ago
Gerald Ford's, A Time to Heal is an intriguing look at the man who served as Congressman, Vice President, and then President. The book allows readers th e opportunity to learn about the final days of Watergate from the man who would inherit the toughest job in the world, at that time. What makes this story so special is Ford's ability to be able to criticize not only the mistakes of those around him (Richard Nixon) but also the mistakes constituted by himself. The story is a must for those who want an in-depth background behind President Ford, the Watergate ordeal, or politics in general. In addition to learning about the history that happens during Ford's administration the reader also learns about Ford's Presidential style. That's something that no other biography or encyclope dia entry can offer. What better way to learn what Ford was like as a person than to read it in his own words? A Time to Heal is the best way for America's reading public to meet Ford and develop a keen sense about who and what it takes to be President of the United States.
Trustpilot
Copyright © 2022 Thriftbooks.com Terms of Use | Privacy Policy | Do Not Sell My Personal Information | Cookie Preferences | Accessibility Statement
ThriftBooks® and the ThriftBooks® logo are registered trademarks of Thrift Books Global, LLC